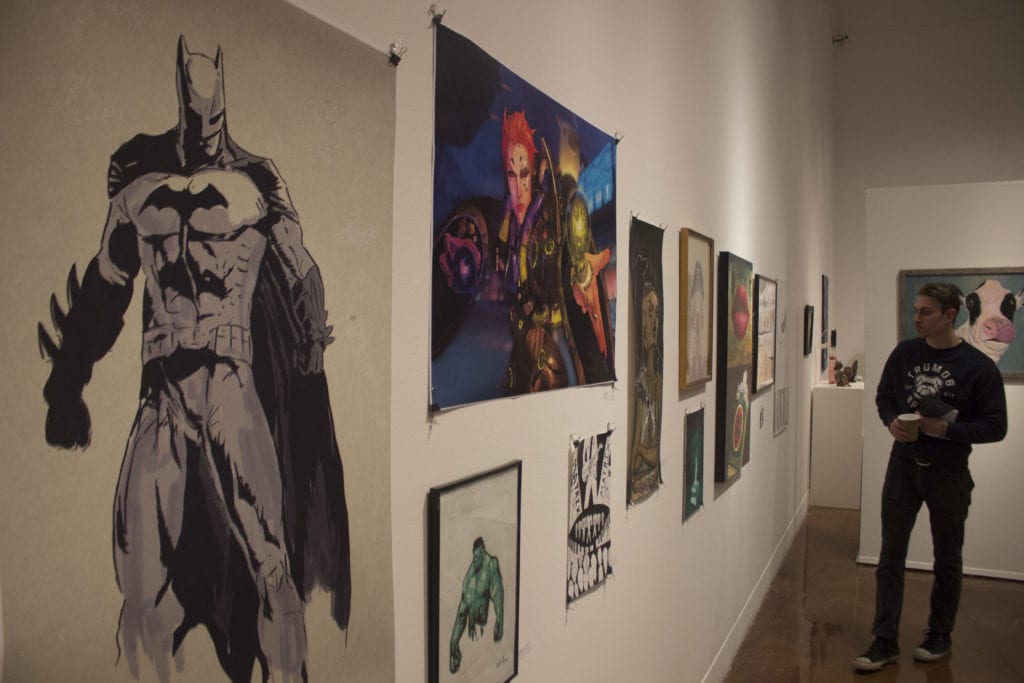 The opening of the annual Clackamas Community College Student Art Show was May 17, and open till June 7.

The exhibit opened at the Alexander Gallery in Niemeyer Center, followed by an awards ceremony and banquet with free food and live music played by CCC students.

One hundred thirt-four pieces of original artwork were submitted by CCC students, all of which were created over the past year, this is in stark contrast to the “300-something” pieces submitted last year, according to gallery display student Inez Finstad.

Fewer pieces made displaying easier, and no pieces were rejected this year, meaning there was no need for a “Salon de Refuse” to display unaccepted art, said Finstad.

The art was juried for entry by CCC art department faculty, and judged by Bill Carman, a professional artist and art professor at Boise State University.

First place overall went to Reid North for his piece titled “Dumpsta Funk,” a functioning steel drum set made of scrap metal, with which North performed on campus several times this term.

The pieces themselves are varied in subject, ranging from low poly digital prints of Overwatch characters Reaper, by Mitch Kozloski and Moira, by Julie Copeland, to a seven-page inked comic titled “A Tale of Two T.A.’s”, by Tyler DeBerry.

Superheroes make their appearance in several pieces, with a Batman digital print by Tori Keith, and a block print of the Incredible Hulk by Caleb Wynne.

The whimsical is shown in a painting of a cat in front of a galaxy by Jenny Bijlveld, and a three-headed stuffed unicorn aptly titled “It’s So Fluffy I’m Going to Die, Literally”, by CCC student Erin McEwan.

Society is challenged in an abstract painting of a nude woman with the word “NORMALIZE” spelled out at the base, by Catherine Greer.

Humor finds its way in with a series of four comics by Eric Carlson, each depicting a character, “Bill”, in various laughable situations.

The gallery class, taught by Dave Andersen, was responsible for displaying and arranging the accepted pieces, which was an opportunity to practice skills learned in the classroom.

“The gallery class, they’ve been trained on how to handle art professionally. We have all sorts of things we do in preparation for this, it’s some really great lab experience for them to do it,” Andersen said.

This show was very difficult for the gallery display team because they had all kinds of pieces that came in besides painting and drawing; they had the technical department- graphic arts- and many more posters this time,” said gallery display student Inez Finstad.

“It took us three days to get this together, and laid out and set up the way we wanted it to be, for every piece to look right, and be in the right place and hang everything so every person’s piece got to be shown in the show, because we had so many pieces come in,” Finstad said.

“Everybody that brought a piece, is here [at the show], so you can see how many artists we have at Clackamas Community College that wanted to show their stuff in the show,” Finstad said.

“And that’s amazing, in every corner we have something different, something different to see, it’s so exciting! It was a lot of work, I really enjoyed it, I had a lot of fun, and we had a good team, and we worked hard, and we’re having a party,” Finstad said.

Visiting judge Carman was impressed with the artwork presented at the show.

“Coming to a two-year school, and jurying the show, and seeing the quality of the work, [it’s] comparable to universities where I go and jury the work, it’s pretty remarkable, and it’s pretty satisfying to see that,” Carman said.

Before presenting the awards, Carman talked about his judging process, and advised students to not be discouraged by not winning.

“I’ve had pieces jury out of one show, and win an award in another show,” Carman said. “If you’ve received an award, or accolades, that’s just great. It’s a wonderful thing, a feather to have in your cap, it’s a great feeling, but if you didn’t, just think ‘well, this guy, he’s not that great.”

Art shows are a a great opportunity to get real-world experience and exposure, said Carman.

“Student art shows, their work is never up to par for professional, but that’s what it’s supposed to be,” Carman said. “So, if you want to do it, then be ready to work really hard, and really long, and you have to develop enough passion that you stick with it.”

The art is on display in the Alexander Gallery, which is open to the public Monday through Friday, 9 a.m. to 5 p.m.