The Portland Surf Club is real

So you want to surf, but you live in Portland? There are opportunities up and down the Oregon
Coast to catch waves. Although for the best surf, it’s unlikely you’ll be catching many rays. This is
because the best surfing in Oregon is done in Fall and Winter. Before highlighting some of the surf spots on offer, let’s cover some of the basics. It’s difficult to put the feeling of riding a mountain of liquid on a planing mechanism of varying length. Even the briefest of glide on a surfboard can last long in the memory and be enough to motivate a lifelong urge to paddle into the ocean regardless of weather. After covering some basics, we’ll detail some easy to get to surf spots. 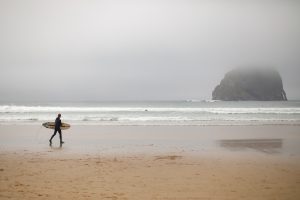 A surfer prepares to go out into the water at Pacific City, Oregon. (Shutterstock/Keep Smiling Photography)

To start, the ocean is not your friend. Keep your eyes and ears open when you’re in the water.

If you’re just a novice, understand that surfing is an activity that is tough to improve at any other way than actually doing it. It’s possible to find swell information detailing wave height, wind speed, tide activity on commercial websites such as Surfline and Magic Seaweed. Although not always 100 percent correct and reliable, those websites are the best to get a basic idea of the current surf and what may be on tap. Coming from Portland, you won’t always know what you’re working with until you get to the coast. Once you’ve picked a spot to travel to, take some time to watch the surf zone before suiting up and heading out. There are many factors to think about when planning a surfari, where to go and how to go about making it to the lineup, the best surfers are keen observers.

So, what are you looking for exactly? Keep an eye out for rip tides and hazards such as rocks
and other humans. There’s data such as wave height, wave period, swell direction, ocean topography, wind speed, wind direction, longshore current and tide shifts that all play their part in the quality of the wave. The ocean has a rhythm and waves are created by either wind swell or groundswell. Wind swell, being more geographically localized, tends to have a shorter wave period, leading to a less powerful wave. But don’t scoff wind swell as it can make for punchy quick waves with a steep drop or nice ramp to attempt an air (once you’re ready for that of course). A groundswell builds from further away out in the ocean and can bring with it powerful waves the height of a house. Don’t forget, even a 2-foot wave looks big coming at you when you’re lying on your stomach. A 4-foot wind swell with a wave period of 8 seconds will equate to smaller surf while a 4-foot groundswell with a 20 second period will swing in overhead waves. Typically, the longer the period, the bigger and cleaner the wave. This data is all available on commercial websites organized in an attempt to make things easier on the reader. We’ve briefly covered wave size, but how about direction? Oregon is on the west coast, there will be no easterly swells. Looking at a map, it can be determined what swell direction a surf spot is open to. A wide-open beach break will absorb swell from almost all directions while a rock formation jutting out from the land can close off waves from a certain angle. However, those “point breaks,” a surf spot where the shoreline extends into the sea creating a headland, can allow the right swell direction to create a wave that almost appears mechanical with how it pinwheels around headland and towards the shore.

Some surf spots are better on low tide while others require more water to break properly.
Offshore wind (gusts that move from the land out to sea, easterly winds for west coasters) will help a
wave stand up and potentially create a barrel for a surfer to tuck in to. Onshore wind pushes a wave
over and can ruin a surf session. North or south winds can add texture and make for a bumpy ride if
strong enough. Being aware of what direction the break you are at is facing, along with swell and tide
knowledge can greatly increase your chance of scoring.

Finally, etiquette. It’s never nice to be barked at by some salty local. If it happens, let that anxiety and negativity roll off your back like the water is already doing. Depending on how many take off zones there are; which is determined by what type of wave (i.e. point break, beach break, shore break) a lineup naturally forms as surfers move towards the peak of a wave. The peak is the optimal take off zone for riding a wave. Too far on the shoulder and one might not have enough speed to catch it. Too deep near the crest and you can expect a steep, speedy drop that if managed correctly, can lead to a memorable ride. The lineup works similar to an escalator. After a surfer rides a wave they move to
the back of the line, if observing proper etiquette. Be aware of your surroundings when paddling for a wave, know which direction you want to go. If you’re just starting, there’s no shame in standing up and going straight forward after paddling hard for a wave, still surfing! As you get more experienced, you’ll try angling your board in one direction or the other, seeking a longer ride down the face of a wave.

Look both ways (left and right) when paddling for a wave and know how to back out to try and avoid
dropping in on another surfer. Know this, when you are learning to surf, you will snake someone on a
wave, it happens, don’t let it deter you. Make sure the other surfer is okay (always aid a surfer in need), apologize and move on. Perhaps move to a different peak if the aggrieved can’t seem to get over it.

Let’s jump in to some popular spots “nearby” Portland.

Seaside
Entering Seaside, Oregon, find your way to the ocean near the south side of town. There’s
plenty of parking at Seaside Cove and if you’ve reached the lot for the trailhead to Tillamook Head,
you’ve gone too far. From Portland, Seaside is the shortest drive. Rentals and gear purchase will be
found in town at either Seaside Surf Shop or Cleanline Surf. Don’t be shy, ask the staff at the shop
where to go, what equipment you should use. Once suited, possibly booted and ready to get wet, you
can either scramble across the rocks or start at the beach to paddle into the surf zone. A few hundred yards down the point is a heavily localized take off zone. The vibe is much friendlier and understanding on the inside (closer to shore). Seaside is no joke and although the waves can be ridden by all levels, due to the potentially surly local vibe, it’s best to have a firm grasp of what you’re doing or be out there with someone who does.

Otter Rock
Take a longer drive from Portland and you will find yourself at what has been called “The Waikiki of Oregon.” An outstanding spot for beginners or anyone looking to have a good time. Found at Devil’s Punch Bowl State Park in between Depoe Bay and Newport, there is a small parking lot and cold water showers for a post surf rinse. Protected from northerly winds, Otter Rock offers a small fickle point break and various peaks to the south. The long stairway from the road to the beach can be treacherous, but overall this is a lovely spot to spend a day, or weekend as you can camp just down the road at Beverly Beach State Park. Pura Vida Surf Shop right next to the beach on the same road offers rentals, lessons and quite possibly anything you may need to look or feel like a grizzled veteran.

Pacific City
A wide-open beach break is found just south of Cape Kiwanda. Park anywhere you can as this
area is popular with fishermen, tourists, standard beach goers as well as surfers. With larger surf, it can get heavy out there and one could easily break their board, or themselves on the shore break on the inside. On a smaller day, the sandy bottom can create some nicely shaped lefts and rights that are user friendly for surfers of all levels. Open to essentially all directions of swell and wind, Pacific City can go from smooth and clean to choppy and rough when the wind shifts. Moment Surf Co. is found at the corner of Cape Kiwanda Drive and Alder Street. There are hot water showers, which are just delightful, at the end of Alder Street close to the beach. Post surf, enjoy a beer or two at Pelican Brewing.

Short Sands
Also known as Smuggler’s Cove, reach this beautiful beach after about a one mile walk down the
path from the Oswald West State Park parking lot, pack and prepare to be there all day. South of
Cannon Beach in Arch Cape, Short Sands is a mellow spot for surfers of all ages and abilities. The beach is nestled between large headlands to the south and north, which can protect it from strong winds in either direction. Tide and swell play a factor in the quality of this wave, it’s a lovely outing regardless. There are no showers, and the nearest surf shop is 15 minutes north from the parking lot in Cannon Beach.

As you can tell, there’s so much more to surfing than grabbing a log and jumping in the water. The more prepared you are, the better chances you’ll have for success, know before you go. Make a log so you can compare your experiences and know where to go the next time a similar swell comes along. When we surf, similar to other thrilling activities, our bodies release dopamine and our mood can
elevate. This is not only from actually riding a wave, but also from being thrashed back and forth by a
wave that’s swallowed you whole or after a less than stellar dismount into the whitewash. Of course,
there’s plenty of things to worry about, but this writer’s advice is to relax; understand you are splashing about the place in a rubber suit seeking a moment that has the possibility of feeling like an eternity.