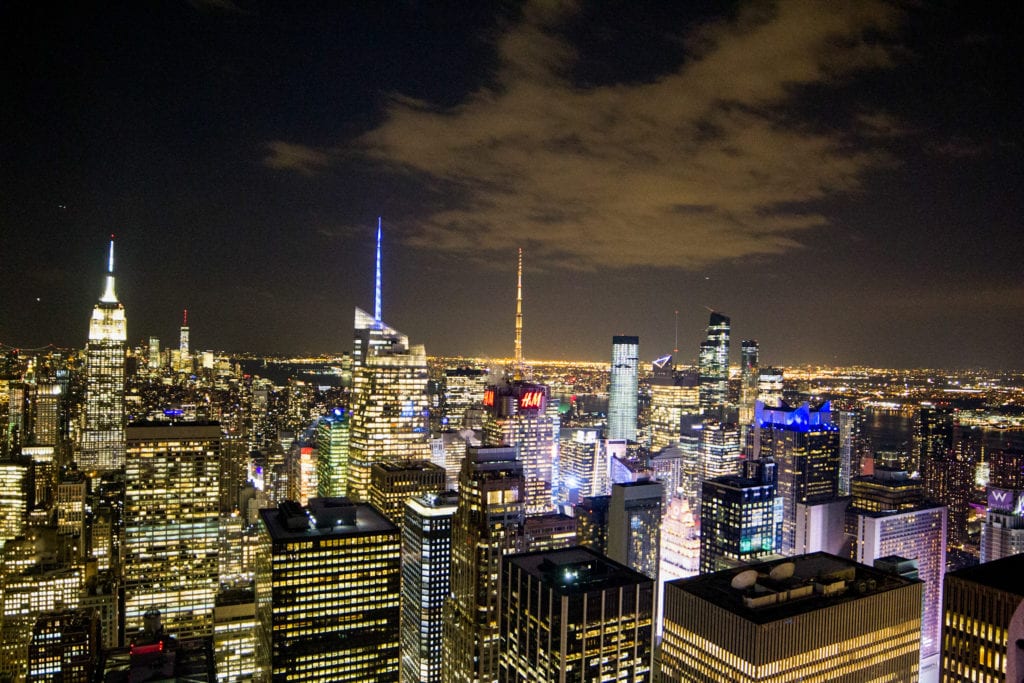 The window next to me smelt vaguely of spoiled milk as I stared across the tarmac at the landscape. The mountains lay far away, though cloaked with Oregon’s signature pine trees, they seemed to smoothly undulate above me. Soon, I’d be higher still than them, crossing the country in a mere six and-a-half hours to arrive at an event I’d waited patiently for for a year. I could hardly wait to see New York City.

Finally, the National College Media Convention was here and we, like small fish, were hooked to an invisible line that dragged us swiftly and roughly into an unknown world of skyscrapers, taxis and glittering lights. Finally it was my turn to visit the media capital of the world.

Days in advance, eight students from The Clackamas Print downloaded the conference app on our phones, which scheduled and spelled out the next three days for us all. Eagerly we’d rubbed shoulders comparing and contrasting schedules so we could all attend as many seminars as we could – sometimes begging a friend to take extra-detailed notes to share, because one time slot held the best presentations.

The College Media Association conference is a yearly event that puts student journalists and publications in front of some of the industry’s more successful professionals. In addition to dozens of small sessions about working in the media business, this year’s conference hosted two keynote discussion panels: the first with four staffers form the Vice media group and the second with Richard Leibner, a man that works with and for some of the people we, as young professionals, aspire to be.

Here, we had three days to ask questions, gain insight from people who will hopefully someday hire us to write, design, and advertise for them, as well as learn how to be the best writers, designers, editors, and bosses we can be.

With a docket of more than 80 sessions per day, students and advisers alike filed into ballrooms to attend talks ranging from the more serious “9/11 Then and Now: Journalism from that Seminal Event,” and “Covering #MeToo,” to “Comedy in Politics,” and “SEO When You’re SOL.”

Though some talks were more light-hearted than others, the entire reason for these sessions is to enhance and inspire the next generation of reporters to cover what they’re passionate about, as well as equip them with the necessary tools to survive and thrive in the media.

As print journalism has changed with the addition of digital news platforms such as Flipboard, Apple News and Snapchat Discover, sessions are offered to help students and advisers keep up with the digital revolution as well as create a compelling online presence while maintaining their print publication.

Though digital professionalism courses, writing improvement and photography composition courses abounded, more niche courses focusing on ethics and laws in the newsroom, gender and sexuality in the workplace, and race and ethnicity.

Sponsors including specialized journalism schools, media groups and even the Dow Jones News Fund support these groups to preserve the art of storytelling, the importance of unbiased news, and empower rising journalists to hold themselves to higher standards of ethical responsibility than even some major news and entertainment outlets do today.

Launchpad events such as the CMA conference and the ACP conference The Print attended last year are invaluable and integrally important to building a rapport with media professionals and networking with other students and advisors.

Events like these inspire us all to collectively push ourselves as journalists to a higher standard of truth, while rebuilding the trust of our readers in media, showcasing what we can do to produce to bring our readers the highest quality content possible. These conferences exist as a gateway into  the industry for newbies and kindling for those established already, feeding the fire that lights the way toward truth and justice in journalism, that that ties the hearts of journalists together.