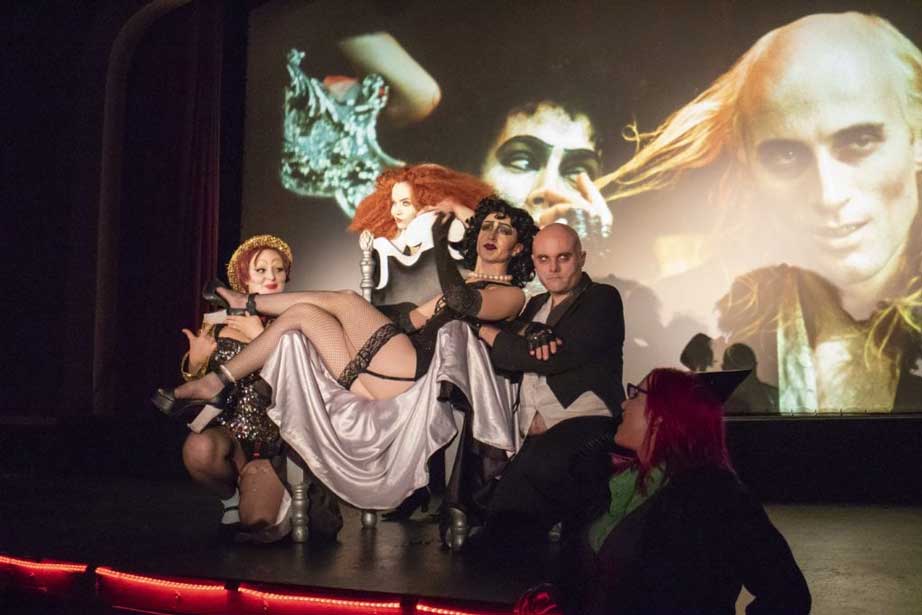 I had three thoughts running through my head when I arrived at Clinton Street Theater to see The Rocky Horror Picture Show on Saturday night.

Why is there a line wrapped around the block for an 11:30 p.m showing?

What’s so special about this movie?

I can safely say, all these questions were answered. To ease my curiosity, I spoke with the owner, Lani Jo Leigh, before the show. According to Leigh, the theater has been performing Rocky Horror since 1978, which makes it the longest, continuously running weekly show in the world. What makes this particular show special is the addition of a full shadowcast, call-backs and props.

While the original 1975 movie about a newly-engaged couple wandering into the mansion of a transvestite scientist plays on screen, a cast of 14 people is simultaneously onstage lip syncing and mimicking the characters in the movie. The shadowcast dresses in full costumes and acts alongside their on-screen counterparts. While all this is transpiring, audience members happily shout call-backs, or informal lines in specific points of the movie.

Not only do these call-backs occur constantly throughout the movie, with few moments of silence, props such as rice, toast, playing cards and rubber gloves are thrown in scenes or used to make sounds.

The Rocky Horror Picture Show has been described as a cult classic and this was proven evermore by the number of dedicated fans. With an added focus on self-expression, attendees were welcomed into the theater for dressing up in elaborate costumes, from the show or outside media.

People dressed as Dr. Frank-N-Furter, a headless man and even as Coraline.

Even if you’ve never been to the show, you are encouraged to participate and dress up, but it’s not required. I made the mistake of not dressing up, and I learned my lesson. Once everybody is seated, an informal costume contest takes place, with primarily three categories, group costumes, anything not Rocky Horror, and everything Rocky Horror. The audience continually roars for each and every patron, and no one is ever made to feel bad about how they dressed.

Despite Rocky Horror being such an infamously lewd and raucous show, almost to the point of uncomfortability, a theme throughout the entire night is that extra emphasis on safety and welcomeness. Another thing Leigh mentioned is,“All of these people are volunteers that are here with the Clinton Street Cabaret,” which is another great part of the Clinton Street Theater: every six months the cast changes to keep Rocky fresh. What makes this particular show special is the addition of a full shadowcast, call-backs and props.

Because of Rocky Horror, the Clinton Street Theater has become a safe space for the LGBTQ community, and people of all ages.

The director of the show, Kendra Virgin, explained how important this show is to people. “I gained severe body confidence out of all this because I was never allowed to dress in positive ways,” Virgin said. “That’s one of the things I love about this show is that it gives everybody a different thing. A lot of people in our cast gain a friendship and a community out of that. Lots of people gain body confidence, a lot of people gain the ability to speak up, and yell and be loud. So it gives a lot of things to different people in the community, it’s where you’re allowed to be yourself and be whatever you need to be.”

Occasionally, in a few rare instances, the show itself has to be taken down a notch in order to maintain this safe community.

“We used to have a lot of Nazi jokes,” Virgin said. “And because of all the political stuff right now, we’ve been trying to yank them back because it’s something that’s freaking a lot of people out.”

This effort to not offend the audience is also extended to the humor, in an inverse way, as call-backs are also changed to be relevant to the audience.

“One thing we try to do is say, this isn’t funny right now, let’s pull that back. So in the scene where the coffin opens, someone’s gonna yell, hey, show me Carrie Fisher. That’s gonna be more up to date.”

With so few lines that are unwilling to be crossed, it’s relieving to know that comedy and safe spaces aren’t mutually exclusive.

The original movie remains an icon today through the positive depiction of sexual liberation, awareness and queer identity.

When the sold-out show finally started, it was an event in and of itself. The audience waited in eager anticipation for the opening lines to start, and the crowd’s roaring took over once it began.

They had come prepared with call-backs and props, and knew exactly what to do. When characters were introduced, songs were sung, or even when it came time to dance, the audience was always ready to respond, and despite the fact that I was one of the few people who hadn’t seen the movie or the live show, I still was able to join in the audience participation.

The shadowcast exaggerates parts of the movie and provides onstage humor as well. It’s hard to confine this type of experience into a single category such as a simple movie or even as a stage show, or even to simply just define it as a performance.

I think it can be best defined as a conversation between the audience, the shadowcast, and the movie, but even that doesn’t explain all the magic that happens at a live show. The shadowcast deserves all the credit for the work they put in, as they are the ones helping to say call-backs, lip syncing, and acting alongside managing the rest of the show.

While the plot can be rather confusing, outlandish and vulgar, the surprisingly well-written dialogue, campy acting and over-the-top singing make this movie more objectively entertaining than bad. Additionally, people enjoy the movie unironically and not just as a joke, such as with Tommy Wiseau’s The Room, which is notoriously badly-written and has similar cult status.

When people go to see Rocky Horror (or if you’re seeing it live, experiencing it), there is no connotation that anybody dislikes the movie or is attempting to make fun of it. Rocky Horror stands out for being ahead of the times and providing a plot uncharacteristic for 1975, designating its status as a cult classic.

When this event finally ended, there was thundering applause for the shadowcast and for the movie. The shadowcast was more than happy to reciprocate this cheer, as evidenced by the fact that they stood outside immediately after the show to thank the audience and to answer questions.

Clinton Street Theater provides a unique opportunity for people to experience a movie unlike any other, in an unnatural fashion, performed by people who care.

If you’re interested in seeing the show, tickets are still available for their 11:30 p.m show on Nov. 2, but be quick, since tickets sell out.