‘This is where the fun begins’ Obi-Wan Kenobi review 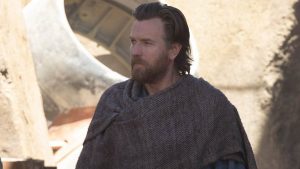 With the highly anticipated Obi-Wan Kenobi miniseries having finally been released on Disney+ on May 26, Star Wars fans across the world are in a state of euphoria over this new story in the Star Wars saga, and with Ewan McGregor and Hayden Christensen reprising their roles as Obi-Wan Kenobi and Darth Vader respectively, there is no better time to be a Star Wars fan.

While the Kenobi series release was originally delayed by about two weeks, Disney decided to make up for this by releasing the first two episodes at once, and after having watched these first two episodes let me say that I have no doubt that this series will be one of the best ever made by Disney.

Director of the Kenobi series Deborah Chow has gone above and beyond in telling a gripping story of Obi-Wan’s time in hiding, and using newer characters such as the Inquisitors who have only been introduced into the canon Star Wars universe in the last few years, ties together older Star Wars and newer Star Wars in a fantastic way.

It’s also amazing to see these beloved actors coming back to reprise their roles, especially after the backlash they received in the early 2000s when the prequel trilogy was being released. This criticism from fans even drove Hayden Christensen away from Hollywood and acting altogether. It was in recent years, however, that a new wave of Star Wars fans rose to prominence and looked back on the prequels with nothing but love and admiration, along with a strong desire to see more from these actors. It was this love and attention from fans that brought Hayden Christensen back to the Star Wars franchise, and those same fans couldn’t be happier.

Disney also decided to plan this series release on the same night as their Star Wars Celebration 2022, which was held at the Anaheim Convention Center; they even granted attendees an early viewing of the first two episodes, with Ewan McGregor and Hayden Christensen there as special guests.

Disney and Deborah Chow, along with all those behind the scenes who helped to make the Kenobi series, have truly outdone themselves and have given a beloved character the series he rightfully deserves. The Obi-Wan Kenobi miniseries will be six episodes long with each episode about 45-55 minutes long.