October has been deemed the month of falling leaves and spooky vibes, and movies have played a large part in developing that stigma. From raunchy classics such as Evil Dead to outright scarring experiences such as The Thing, here are five horror films that are sure to grab your attention in this time of terror. 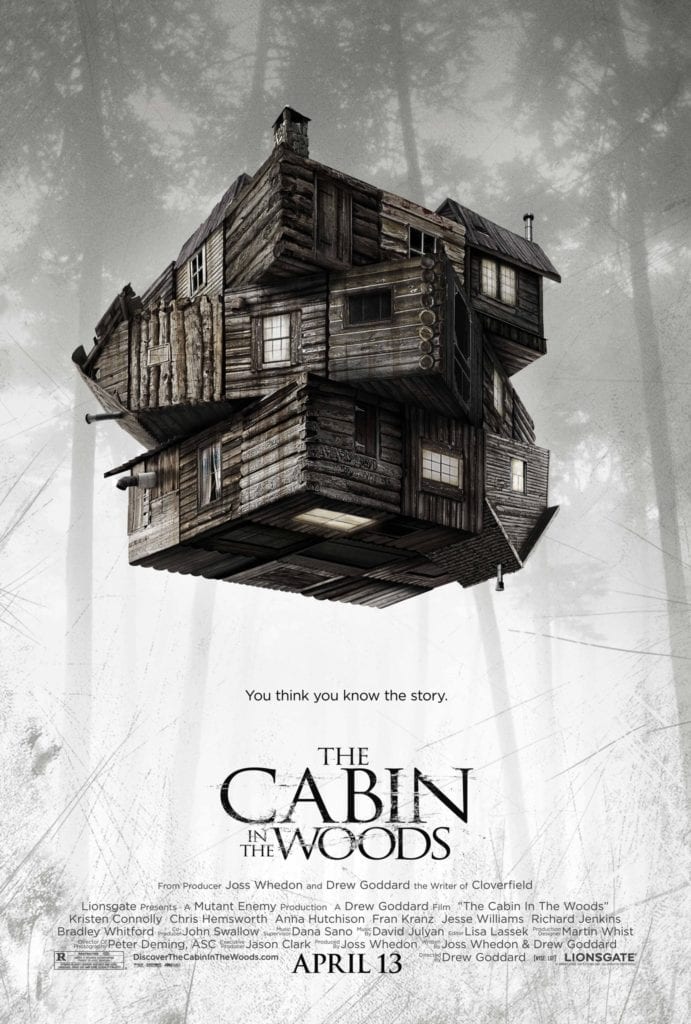 Cabin in the Woods

Directed by Drew Goddard  (Cloverfield) and adapted to screen by Joss Whedon (The Avengers 1 & 2), Cabin in the woods takes an unorthodox approach to the horror genre. The movie follows an eye rolling cliche path at the start, with five friends that deem cramming themselves in a van and vacationing at a literal cabin in the woods to be a sound idea. Though as the movie progresses we learn that there’s more to this situation than meets the eye.  An outside organization has turned the site into a testing facility where the campers are the test subjects, set to all be killed one by one to appease a ritual of some sorts. A slew of monsters awaits the teenagers choices that they make whilst staying in the cabin, and as various triggers in the cabin are set off various monsters are let loose to attack the group. The testing facility houses dozens upon dozens of outrageous and terrifying monsters such as dismemberment goblins, hellbats and even a cheap imitation of pinhead from Clive Barker’s HellRaiser. If you’re looking for a few good laughs and several honest screams, look no further than Cabin in the Woods.

A personal favorite and renowned cult classic, this movie is one that is sure to instill a rational fear of clowns if you’ve managed to get this far without one. Made in 1988 and directed by the Chido Brothers, Killer Klowns from Outer Space takes place in the small and quaint town of Crescent Cove. A circus tent shaped UFO crash lands in a forest just outside the city limits, and gradually more and more clowns seep out and make their way into town to wreak havoc on its citizens. Sporting unsettlingly real costumes, the clowns look the part and then some. Each clown hovers around seven feet tall, with blinking eyes, yellow rotting teeth and movable mouths accompanied by visible smile and frown wrinkles. They come equipped with a plethora of wacky, people catching/slaying gadgets. Cotton candy cocoons, man eating popcorn and even acidic pies await the unsuspecting individuals of Crescent Cove. If wacky Sci-Fi horror is your thing, look no further. 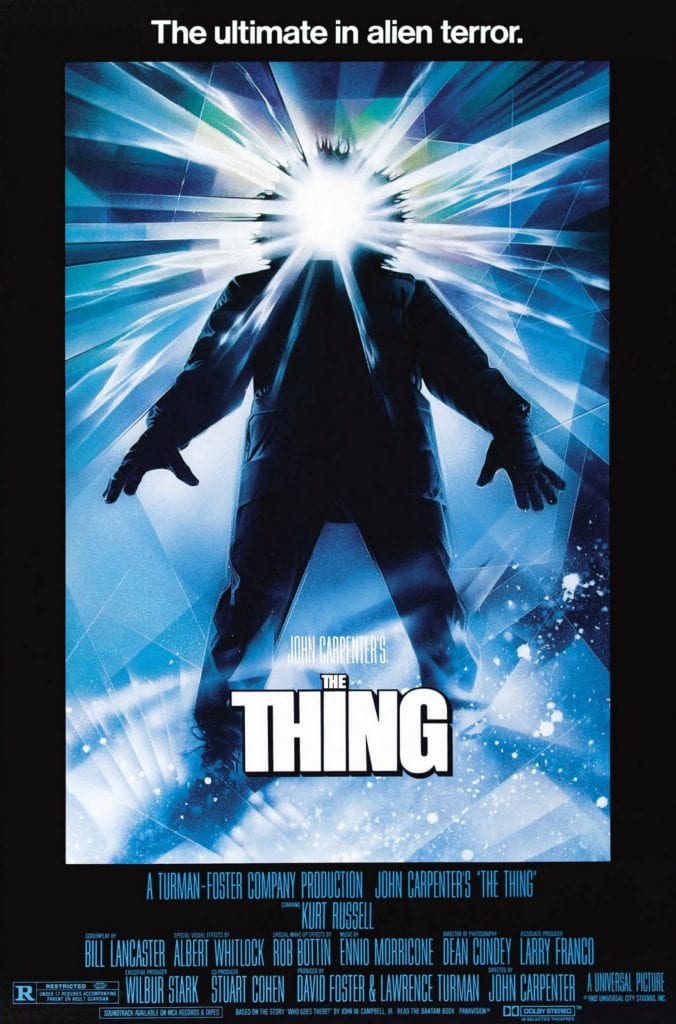 Filmed in 1982 by John Carpenter, with a recent sequel made in 2011, The Thing tells the tale of a group of scientists on a research expedition in the unforgiving snows of Antarctica and their battle against a shape shifting creature with an insatiable bloodthirst. Kurt Russell plays the lead role as the teams helicopter pilot, who takes charge as tensions arise once the crew realizes the potential danger of the creature’s ability to inhabit the appearance of any organism it comes in contact with. This film is filled with action and an impressive display of practical effects. Each scene that shows the thing shape shifting is filled with detailed gore, and the forms that the creature takes with each host it captures is unique and nearly indescribable. A thrill til the very end, The Thing is not for the faint of heart. View at your own risk.

Filmed in 1981, Evil Dead starts off following the same formula that Cabin in the Woods openly mocks. Five friends, cabin, woods, death etc. Upon rummaging through the cellar of the cabin, our protagonist Ash Williams discovers the Necronomicon, an ancient cursed tome used for rituals and summonings of demons and elder gods. Being the dim witted teenagers they are they see it fit to attempt to read certain pages from the grimoire for laughs. Unbeknownst to them, this sets off a chain of events in which the cabin becomes the stomping grounds for malevolent demons and spirits. If you’re savvy with 80’s horror movies, the saying “swallow your soul” should ring a few bells. Numerous sequels and even a tv show have followed in the footsteps of the original film, and it’s still considered a pillar of the horror community to this day. Definitely a chilling movie worth your time, just don’t get any ideas and think reading from creepy old books is a smart move. 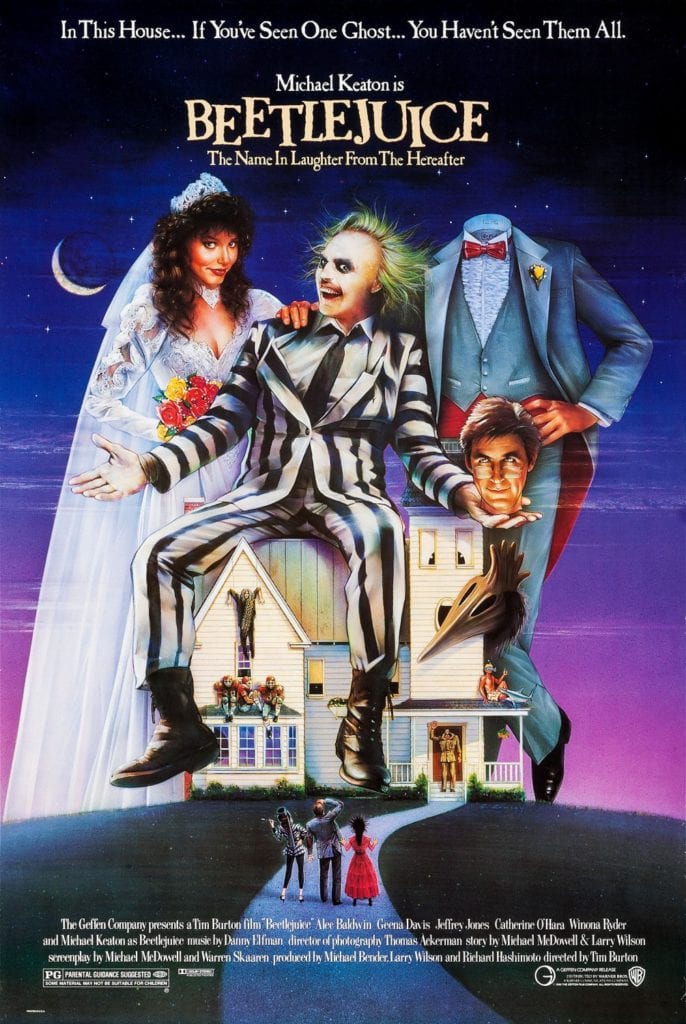 If you were to ask me which film truly defined the talent of Michael Keaton, my first reply would be Beetlejuice. Filmed in 1988, Beetlejuice tells the tale of a couple with an unfortunate streak of bad luck. The pair, upon recently purchasing a house, lose their lives in a car accident. They awaken in their home only to find out that they have died and have been trapped in their own house, with no ability to leave. After some time spent ghosting around their pad, a new perfectly alive family moves in. This family annoys the couple to no end and after deciding that living with obnoxious socialites is no way to live they decide to bring in Beetlejuice, Bio Exorcist extraordinaire, to scare the family out of the house. Trouble ensues rather quickly, as they realize that Beetlejuice just wants to have a good time and scare the pants off others along the way. Filled with incredible cinematography, beautiful yet terrifying set pieces and amazing special effects Beetlejuice is a cult classic deserved to be viewed by all. I highly recommend you view this movie at least once, so that you can get a good grasp of the impressive talent and dedication that went into the making of this film.