Top Gun Maverick: The boy who never grew up

After 35 years in the Navy, Captain Pete “Maverick” Mitchell has failed to grow in any significant way since we last saw him in Top Gun back in 1986.

Despite the Youtubesque intro, in which Tom Cruise addressed the theater audience with his sincere hopes that all would enjoy the film; despite the nostalgia; despite the well filmed aerial combat scenes – this one is worth waiting until it hits a streaming service.

The aerial scenes are what you would expect from a Top Gun movie, the nostalgia is great, the fact that Maverick never grew up is disappointing. When it comes to aerial combat in movies Top Gun set the standard. Although Iron Eagle, which came out the same year (1986), may have gone on to become a series of films, none of those ever matched the cinematic excellence achieved in Top Gun.

Stealth (2005) had some great aerial combat scenes but they were computer generated and lacked the authenticity of Top Gun: Maverick, which continues the Top Gun tradition of using real aircraft and getting as close to the action as possible. Sitting the actors in the back seat of actual fighter jets certainly enhanced the realism of the aerial scenes. Those sequences alone might be worth the price of admission, if you like that sort of thing.

The nostalgia is strong in this film and anyone who saw the original will recognize this as a continuation of the first film, though perhaps too much so at times.

The photos Maverick displays are, predominantly, of his time at Top Gun as a student in some odd shrine to the past or an emotional nod to the previous film, viewers choice.

Maverick wears the same leather jacket, uses the same keyring, rides the same motorcycle. He still calls out for Goose (his dead best friend) over thirty years later even though he, presumably, let go by throwing Goose’s dog tags into the ocean during the first film – he had moved on, he had grown. And now, not so much.

We got a nod toward Skunkworks, Lockheed Martin’s Advanced Development Program, which designs a lot of the US military’s super secret stealth aircraft. Aviation aficionados, especially those with an interest in secret squirrel stuff, will appreciate the easter egg. Others could potentially appreciate the little skunk on the tailfin of Mav’s super cool, super fast experimental plane.

We got information about the rise of drone tech and the limits of human pilots as well as the limits of older fighter aircraft against new 5th generation fighter aircraft – real world problems facing all militaries as we progress in the 21st Century. But nothing we didn’t see in Stealth (2005) and far less noticeable; more expository background noise used to justify future scenes than any sort of cohesive commentary on the state of military readiness. It’s almost as if the Navy had some editorial control over the film. Wink Wink. Nod Nod.

Beyond the aerial combat scenes and nostalgia there isn’t much reason to see this movie, let alone pay for the privilege.

The plot, if you can call it that, is fairly turn-key if not an outright rip-off of the first film with a little Iron Eagle thrown into the mix for good measure with Tom Cruise filling in for Louis Gosset Jr.’s “Chappy” Sinclair, the wise mentor of young pilots who still has the necessary skills. Only Cruise misses the boat, never truly demonstrating any mentor / student connection with the young pilots he’s there to train. The closest he gets is a re-imagining of the volleyball scene from the first film as a training exercise football game with two balls instead of one.

Then he wanders off to sit by himself and look pretty and gloat to his boss. Then he wanders off and flirts with Penny Benjamin (Jennifer Connolly), a name familiar to fans of the first film as a character who was named but never seen, until now. And Connolly was great, she stepped into the world with a deeper understanding of her role than did her co-star.

The problem is Maverick hasn’t done anything since Top Gun. He’s made no friends, except for Iceman (his rival in the first film) who serves as more of a protector and enabler than a friend. He protects Maverick from the consequences of his actions which hurts not only Maverick but the Navy as well. 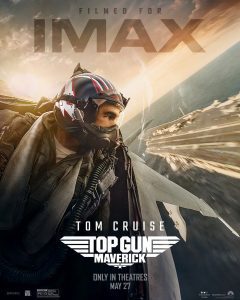 Maverick has had no lasting relationships with a woman. In thirty years this guy has never grown up, never dealt with his demons, never matured. It looked like he would at the end of the first film; he dealt with his friend’s death, reconciled with his rival and got the girl. Apparently he lost it all again, but this time, this time things are gonna be different.

Once Maverick gets to Top Gun any semblance of originality in the script simply disappears. This movie is not about the characters, not even Maverick. That he will win in the end is a foregone conclusion, despite the lack of  evidence given to support this. Instead these scenes are strung together to bridge the gaps between flight sequences.

Miles Teller plays Goose’s son – call sign Rooster. But, really, He’s Maverick. And “Hangman”, Rooster’s rival, yeah, He’s Iceman. They even have some of the same interactions – only not quite as good because they’re uncommitted impressions of what came before.

They aren’t really there to drive the story anyway. They are not there to get you in touch with who the characters are and connected to them emotionally. They are, instead, intended as brief sketches of each character meant to evoke the connection to an earlier film most people haven’t seen at this point – let’s be honest, thirty years is a long time to wait for a sequel.

The parts played by Tom Skerrit and Michael Ironside in the first film, the two hard as nails flight instructors at Top Gun, are now rolled into one part for Tom Cruise – Maverick has become Viper and Jester. That such a large group of pilots has only one instructor, and that he is introduced as though he were the Kelly McGillis character, Charlie, from the first film, seemed odd to no one else in the command structure at Top Gun. Perhaps John Hamm, who plays Admiral Beau “Cyclone” Simpson, and Maverick’s milque-toast nemesis, didn’t feel like flying.

This production falls short by trying to cram too much into one movie; too many references, too many ideas, too many characters. Cruise is doing double and triple duty – a man broken by time and his own ability to get out of his way, an instructor of young pilots, repairing his relationship with Goose’s son, trying his hand one more time at love. It is no wonder Maverick is still so lost and rudderless after all these years – he never takes the time to focus on one thing long enough for it to work out.

That is what happened with this film, it tried too hard to justify it’s own existence. It tried to tell too many stories at once and ended up not really telling any of them. We don’t know Maverick any better at the end of the film than we do at the beginning of the film. It looks good for him at the end, but we have no reason to believe he won’t fail again because it looked good for him last time too. But those fighter jets are sure pretty to look at.