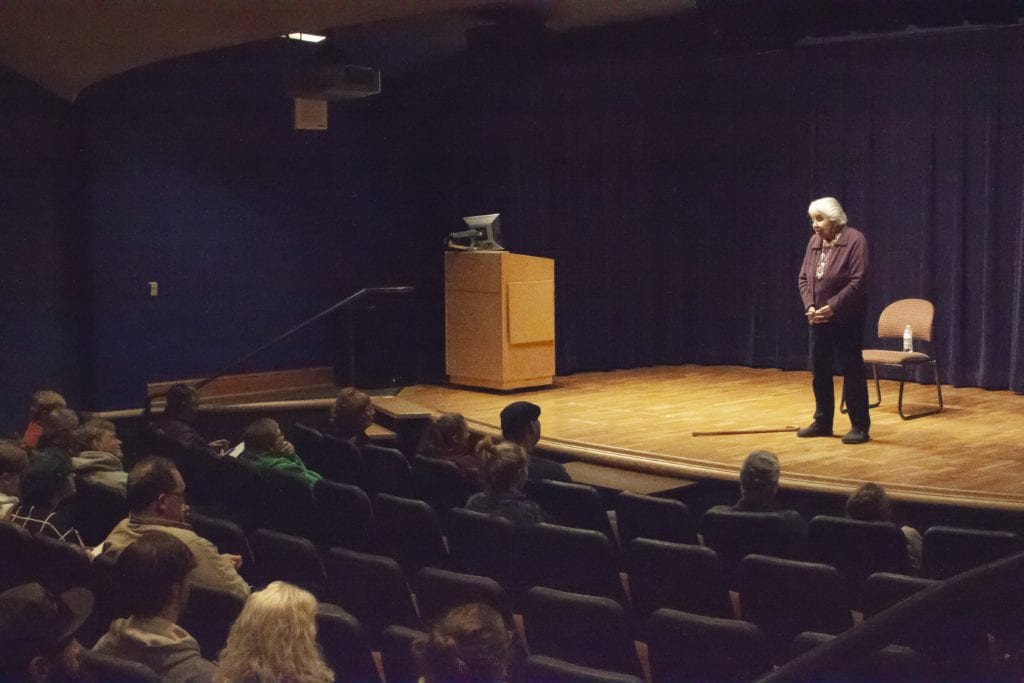 On Wednesday October 9 students and faculty were visited by guest speaker Esther Stutzman, a Coos and Kommema Kalapuya elder with a passion for storytelling. Stutzman,  invited by the Horticulture Department, spoke about her people and their favored plants, though the speaking quickly succeeded the topic of plants.

The tribe of the Kalapuya settled here in the early 1800’s and have roots throughout all of Oregon and the Willamette Valley, including Clackamas, Molalla and Multnomah County. Approximately 4,000 Kalapuya descendants are around today; Stutzman has been telling stories all over Oregon for over 50 years, from classrooms to stages, spreading the word of the ways of her people and the lives they lived.

“We’re here and we’re a very real part of society. People from all walks of life. Teachers, doctors, lawyers,” Stutzman said. An enrolled member of the Confederated Tribe of Siletz, Stutzman also serves as chair of the Kommema Cultural Protection Association which dedicates itself to researching the Kalapuya.

Born in 1943, Stutzman grew up in Coos Bay with her father. “The native people had ways of including every natural food group in their diet. There’s so many additives now that a lot of time people are getting sick from them,” Stutzman said. “I went hunting with everyone in my family, we hunted all the time. We had a lot of friends that had land near our place, sometimes we’d go on the outskirts of Coquille up in the hills. Sometimes in our own backyard.” Venison is Stutzman’s favorite food from the past, along with Salmon.

Stutzman has witnessed the destruction of the ecosystem firsthand over the course of her life, from oceans to farming. “Growing up in Coos Bay, I can say that a lot of overfishing had been done,” Stutzman said. “Even though there are many environmental groups that pay attention to that, there’s still way too many people that don’t understand the preservation of nature. They think it’s going to be here forever but it’s not. The population is too demanding.”

While many people believe the issue of climate change and other world defects are irreversible, Stutzman believes anyone can positively impact the well being of our earth.

“Individually you can do a lot. Signing petitions. Join a cause. Study the issues and vote,” Stutzman said. “Making your voice heard. Too many people are afraid of their voice being heard out of fear that they might be slapped down for it. You need to be vocal.”

When asked what Stutzman would like to see more of today, she replied respect. “Our teachings were based on respect. Especially respect for elders.” Stutzman said. “Also respect for each other which is something that I find absent now and I think a part of that is the loss of core family life. We don’t have the family groupings and the extended families like we used to.”

As for her thoughts on what life meant to her, Stutzman stated that life means loving those around you and those who will come after you. “I think the epitome of the best way of life is being kind to each other and respecting each other. That goes such a long way. It takes little things to remind people that there’s mutual respect,” Stutzman said. “Also the ability to talk to each other, and respecting kids. It’s something that nobody does anymore. Kids are looked at as little adults and that doesn’t work. You have to respect them and they’ll remember that someone listened to them and didn’t just dismiss them.”

Stutzman is currently working diligently to revive and revise her native language and, with help from other elders, she will surely accomplish her task as surely as she will continue to tell the tales of her people. As long as people are willing to open their minds and hearts and truly listen, the ways of the Kalapuya will contribute to the recovery of planet that grows tired of us. As the hour and a half presentation came to an end, Stutzman left the audience with something to hold on to. “We all have to look at ourselves as healers, because we are the healers of the earth.”