Enter the Vortex: A Q&A with playwright Sue Mach 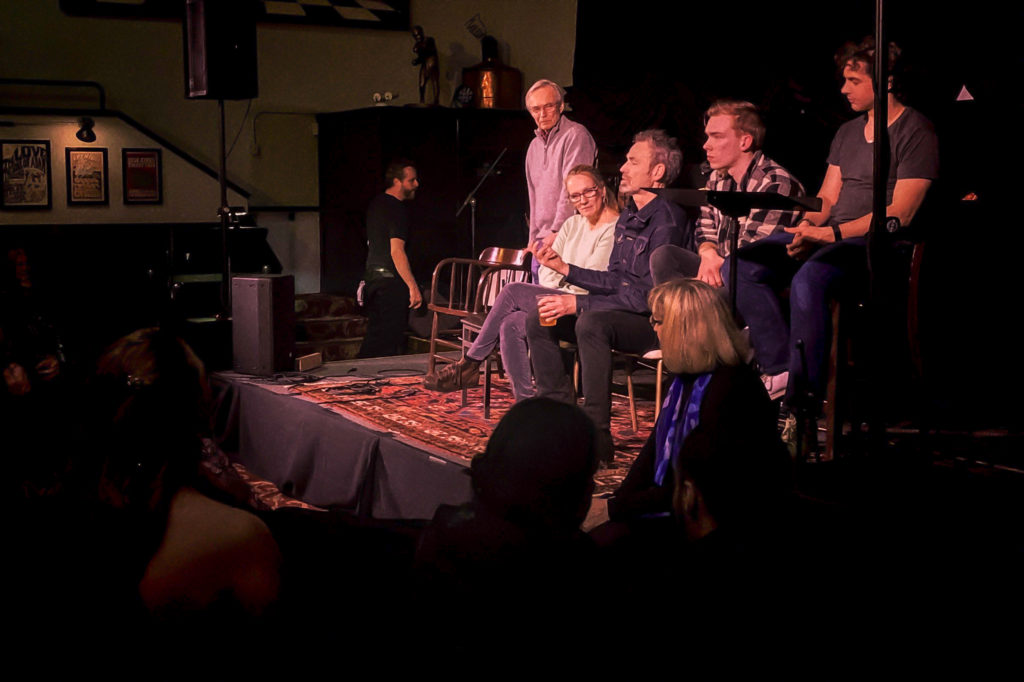 In the summer of 1970, amidst protests, political clashes and anti-Vietnam sentiments, 100,000 people gathered at Milo McIver Park in Estacada for a “biodegradable festival of life,” dubbed Vortex 1. Held in conjunction with a planned protest and riot in downtown Portland, the festival made history as the first and only rock concert paid for by the state of Oregon.

Decades later, playwright and professor at Clackamas Community College Sue Mach conceived the idea to bring this unusual but historic event to the live stage in a musical adaptation.

Following the premiere of her musical brainchild at the Mission Theater in downtown Portland, just blocks from where the opening scene—a clash between student protestors and the Portland police—took place, Mach gave some insight into her work turning a massive historic event and its wide cast of characters into a proper stage production.

Swogger: You’ve written a lot [of plays]. Had you ever written a musical before?

Mach: No, this is my first go!

Swogger: How is writing a musical different from just a standard stage play?

Mach: It’s a lot broader in a sense. When you go into character, you don’t have time in a scene as much to develop a character through dialog. You push the plot forward through song. That’s just a different thing to think about.

Swogger: The whole idea of a musical based on the Vortex 1 festival — that’s a very unique idea. What drew you to that story?

Mach: Well, Bill [Wadhams] was wanting to write a musical, and we were tossing around a lot of ideas. And I had heard this story, and I think it’s such a fascinating story that it lends itself to a musical. So, I was just really drawn to it, and I think the time is right right now for a story like this to be out there about activism and struggles between the activists.

Swogger: There were a lot of little details from the true story that you were able to put in the play. What was the research process like for this?

Mach: Well, I did a lot of reading on it. There’s a book by Matt Love called “Vortex 1.” And I read the biography of Tom McCall by Brent Walth—and he was there last night. So, a lot of the governor’s story came from that. And then I interviewed people. I went to Oregon Historical Society and looked at McCall’s letters. They have a whole Vortex box with photos, and you can go on “The Oregonian” and look at newspaper articles of the time. So, I just started compiling stuff.

Swogger: How long have you been working on this?

Mach: Bill and I started exchanging ideas a couple years ago, maybe two years ago. And then I was on a sabbatical last year, so I was able to throw myself into it when I wasn’t teaching. So, I did the bulk of the writing last year.

Swogger: And this was only, when it premiered, the first half.

Swogger: Is the rest written, or is it still in the process of?

Mach: It’s written. It’s a draft, and so we’ve got a couple other songs almost done. But I think there’s about six more songs. And some of it kind of wraps up. Like getting to the festival itself — that was a big challenge. Like, how do I show this? It’s there. I studied all these musicals where they — like in “Hamilton,” for example, he shows the Battle of Yorktown in one song. Can you do these big historical events in one song? Yeah, you can. So, I kind of played with it. It’s there, but it’s not this big extended thing. There’s the festival in a song.

Swogger: Trying to fit that massive festival into one scene, one song—was that one of the bigger challenges?

Mach: Oh yeah. I rewrote the second act many times. I’m still rewriting it. That’s another thing — with a play, you do something like we did last night. If you’re writing a novel, you have you and your editor, maybe a few friends that can read it and give feedback. It’s kind of private. With a play, you gotta hear it. You gotta hear the dead spots, and you gotta hear where we are now and how we can adjust.

Swogger: What’s your end goal with this play?

Mach: Well, we hope to get it produced, hopefully by 2020, because that’s the 50th anniversary. So, we hope there’ll be a theater company that can pick it up. So, we just gotta get people out to see it and we hope some producer will be like, “Yeah, we wanna do it.”

Swogger: Do you think something like a Vortex festival could happen in this day and age?

Mach: I do, actually. I think the political atmosphere of people just coming together and trying to come together around music—I mean, sure it can happen. But I mean having the state pay for it? I don’t know about that.