“We Are the Water Protectors” Book Review 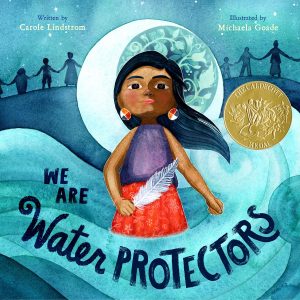 The book was written by Carole Lindstorm and illustrated by Michael Goade.

Now my Niiji (friend) this book is written about a young Ojibwe girl who fights against the Dakota Access Pipeline. It begins with her explaining how her Nokomis (Grandmother)  said water is the first medicine, how it nourishes us and that water is sacred. She explains that the water is so sacred because we come from water. The book talks about how the people speak of a black snake and how it will destroy the land by spoiling the water and poisoning the plants and animals wrecking everything in its path. She tells us how when her people first spoke of the black snake that it’ll come for many, many years. Now that the black snake is here she speaks of Courage and keeping the black snake away from the village’s water. She speaks of rallying up our people together “to stand for the water. To stand for the land. To stand as ONE. Against the black snake.” She also says “It will not be easy.” and she is not wrong.

One of my favorite parts in the book is the repeating page with different colors saying, “We stand with our songs And our drums. We are still here.” It seems people forget we are still here.  I know I’ve come across many people who believe Native American people are extinct. My sister came across another fellow who said “You’re not native you can’t be, they went extinct when my people took your land.” Also a lot of people have said “If natives are still around, where are all of your teepees?”

Although this is a children’s book, the book itself speaks of the pipeline as the black snake finding a way to get it across to the young ones that the pipeline is not good. My little sister loved the imagery of the pipeline being a snake. It tells us how the men are the protectors of fire and the women are the protectors of water, which makes it so much better that two women worked on this book and the main character is a young girl. The last couple of pages have some really good information on the Dakota Pipeline access and a little glossary showing how to spell and say some native words. The last page consists of the Earth Steward and Water Protector Pledge.

Lexie is a Staff Writer for the Clackamas Print. She is also starting to work on comics for the Print. She is majoring in Digital Media Communications creative arts.