Wes Anderson’s “The French Dispatch” is an emotional, comical film that any viewer could love

It is wonderfully whimsical, surreptitiously splendid, and unequivocally unequaled. Wes Anderson’s The French Dispatch is a breath of fresh air for the box office — it is an experience for viewers that is unlike anything else being shown on the big screen. 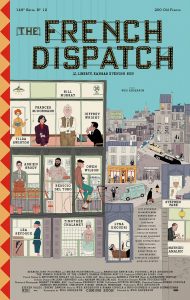 An official movie poster for Wes Anderson’s “The French Dispatch.”

Centering around “The French Dispatch Magazine,” the film feels like an ode to journalists everywhere. The greater narrative revolves around loosely connected stories from a fictional French town, all interlinked by the writers who tell them. These writers make up what is known as “The French Dispatch Magazine,” and their unique recounts of events are what brings so much life to this film. The star-studded cast that is featured brings all of the drama, intrigue, heartbreak and joy that viewers love to see.

Visually, the film is flawless. Every shot demonstrates an attention to detail that would send a viewer on a tailspin if thought about too long. The sheer amount of time it must have taken to coordinate scenes; with intricate set designs, unique camera movements and a cast of characters that populates the film thoroughly — all with flawless execution. There isn’t a single frame in the film that is out of place, and Anderson’s symmetricality has never been more present than it is here.

A warning for casual moviegoers: it may be easy to get lost or confused while watching this film. Every scene is jam-packed with detail, and while it is not necessary to retain all of it, your viewing experience is only made better by paying as close attention as personally possible. I, myself, look forward to watching this movie repeatedly, if not just to notice all of the little things that I might have missed in my first viewing.

If you are a fan of having a silly, fun time, and can appreciate the painstaking work that is required to pull off what Wes Anderson is known for, The French Dispatch should be the next film you go see in theaters.