Portland had the pleasure to have the one and only Jack Harlow perform at our very own Crystal Ballroom on Friday No. 5 as he makes his way across the country for his Crème de la Crème Tour. Upon arrival to the Crystal, I was greeted with an entry line that nearly wrapped all the way around the building and once I did get in I could automatically feel the shaking of the Crystal Ballroom’s iconic floating floor. Finally, after the crowd had packed into the venue, the show started.

There were two opening acts to Jack Harlow, the first being a rapper from North Carolina who goes by the name MAVI, and the second was another rapper who hails from East Side Detroit and goes by the name Babyface Ray. Together MAVI and Ray were able to hype the crowd up to a near chaotic state, and finally after what seemed like hours of waiting, it was time for Jack Harlow to perform his walkout. 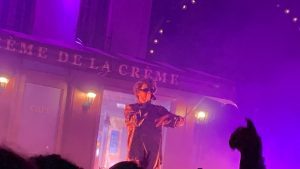 The curtains on the stage were pulled back to reveal an entire stage setup that mimicked a classic French cafe, an announcer came from overhead and welcomed Jack Harlow to the stage. Suddenly the door to the cafe swung open, smoke poured out from it, and out walked,  Jack Harlow. Without missing a beat, Harlow hopped right into his first performance of the night with his hit song Rendezvous, the crowd began to jump up and down to the point that the floating floor was more like a trampoline. After his first few songs, Harlow looked out to the crowd and made it a point that he wanted to make eye contact with every single person in the building, after which he asked every person to hold up two fingers which prompted him into his next song 2STYLISH.

Throughout the rest of the night, Harlow worked the crowd up into a frenzy, but as we know all good things must eventually come to an end. Before ending his performance, however, Harlow had this to say, “This has been one of the best cities we’ve been to on this tour – I love playing in Portland. Thank you all for an amazing night” And with that Harlow went into his closing number. The song that put him on the top of the charts for weeks, WHATS POPPIN. The crowd loved every second of the performance and you could hear the crowd screaming the lyrics from down the street.

After the show, I was able to get quotes from several members of the audience, one man had this to say when asked how he would describe that night, “Lit. Dope. Felt like a movie.” Another woman who had been listening to Jack Harlow since his debut in 2016 said, “Tonight was one of the best nights I’ve had since all this COVID shit has happened.”

Needless to say, Friday night was a memorable one for everyone that was in the crowd and every single one of them left with a smile on their face.