What’s the buzz about brunch at The Hive Social?

Like many people, we like to find excuses to eat good food and to see our friends. Many of us love breakfast but we value our sleep. We compromise by getting breakfast around 10:30 a.m.-1 p.m. , hence the name brunch. 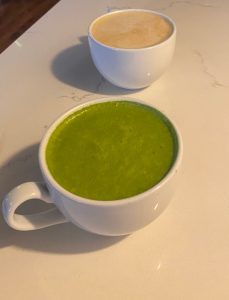 The Hive Social menu changes with the seasons to accompany the in season foods. Photo credit: Kortney Parr

As much as we love the standard IHOP for breakfast food, we like to branch out and try different places. We ended up hearing about a new place for brunch. I guess you could say there was buzz about The Hive Social.

As soon as we stepped inside, it reminded us of a modern farmhouse; it had a minimalist look to it. The colors ranged from brown to white, detailing the walls and flooring, along with orange accents. There were dim fluorescent lights, white table tops, and our first thought was: “Are we in Portland?”

The Hive Social caught our liking due to the care they had for their customers.

Even though people come to restaurants for the food, the atmosphere is an essential part to the experience. The Hive Social had a comforting presence. As soon as we stepped inside, we wondered if the food would match the atmosphere.

Although it was crowded for a Tuesday morning, we were seated within five minutes upon entering. The staff looked young and experienced.

We looked at the menu; we saw that the prices varied from $9 to $25. They offered a variety of items, as well as vegetarian options. They also had a variety of drinks to choose from, all of which were handcrafted, including their sodas.

The food at The Hive Social is farm-to-table, but to our surprise, we also found that the drinks were also made from scratch.

For drinks, we decided on ordering the Matcha Latte and the Dirty Chai which ended up being $6 each. The waitress offered a recommendation of adding vanilla to the latte, which we strongly encourage you to do.

I took one sip of the latte and I fell in love, the vanilla was a great touch. There was green matcha foam at the top and the flavors were evenly balanced. I was worried the matcha might overpower the vanilla or vice versa, but they complemented each other quite nicely.

I tend to shy away from chai drinks, as I usually would rather play it safe with a regular latte. Kortney encouraged me to step out of my comfort zone and order the Dirty Chai. I was not let down. The warmth of the drink felt like a hug. But, the spice side of the drink was a perfect edge.

Kortney ordered the House Waffle ($10) and Bella ordered The Seasonal Toast ($13). We didn’t have to wait too long for the food to arrive after ordering. As soon as we saw the waffle, we were delighted to see it was exactly how it was described within the menu: “Belgian waffle with cinnamon, cardamom sugar, and espresso dusted whipped cream.” 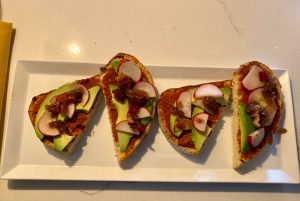 The Hive Social menu changes with the seasons to accompany the in season foods. Photo credit: Kortney Parr

They seemed to nail the expression of eating with your eyes first. As much as my eyes were satisfied, I was excited to try it to see if it tasted as good as it looked.

The entire waffle was seasoned with cardamom sugar and cinnamon and with every bite, it was the same consistency of sweetness. I decided to add the syrup it came with and it didn’t take away from the original flavor, if anything it enhanced it.

The toast was described as a rotating selection of toast loaded with what is in season, so I had no real idea of what would be on it. I only knew that there would be the given avocado on the toast. It came out with four slices of what I believe to be sourdough; the toast was accompanied with a tomato paste-like spread, sliced avocado, sliced beets and topped with caramelized onions. The flavors together to the eye were random but to the taste, they fit wonderfully together.

The overall dining experience blew any expectations we had. If we were to make any critiques, we would say that it was extremely hard to find parking. We are looking forward to seeing how The Hive Social will progress in the future.

If you’re looking for a new place to eat brunch in Oregon City, we would definitely recommend for you to take the time to try The Hive Social.