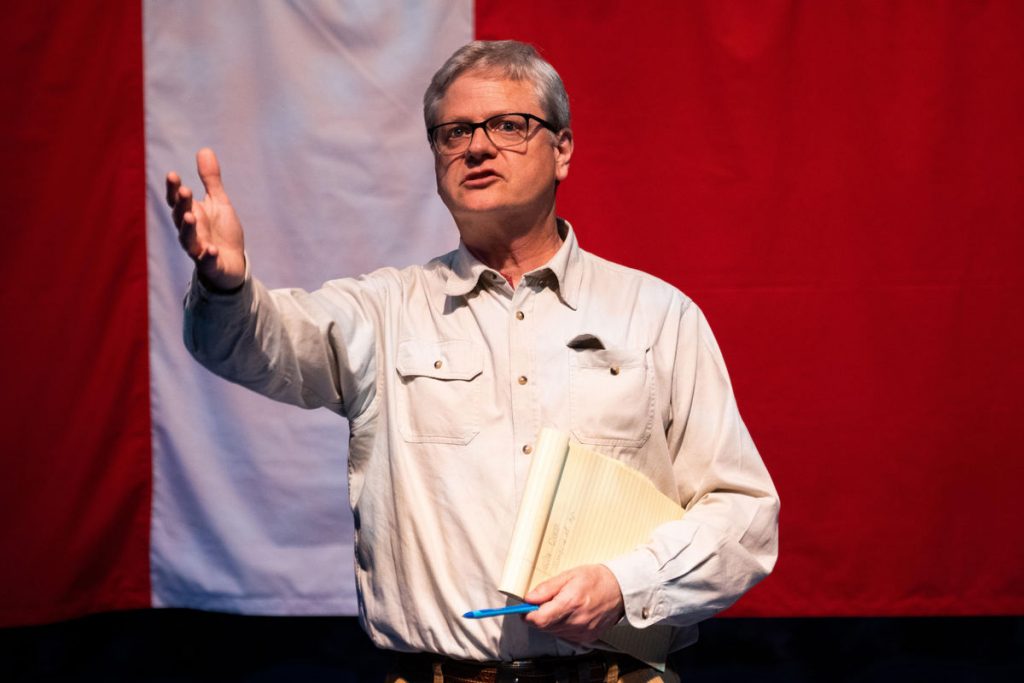 Jim Eikrem addressing an audience before the ‘Number the Stars’ production.

Jim Eikrem has been terminated from Clackamas Community College following several complaints from students and staff regarding his conduct.

Eikrem’s termination comes in the wake of allegations levied by several individuals involved with the CCC theater program. Allegations include inappropriate conduct involving several minors who participated in the spring production of “Number the Stars,” refusing to accommodate or affirm the gender of transgender students, and harassment of students and staff within the program.

Sue Goff, the dean of Arts and Sciences for CCC, confirmed in an email on Sept. 23, 2022 that, “Jim Eikrem is no longer employed by the college.” Goff and other members of the college’s Communications and Theater department have declined to comment further on Eikrem’s termination.

The Clackamas Print reached out to several students who participated in “Number the Stars,” the spring production put on by CCC in 2022. Centered on two young girls and their Jewish friend living in Nazi-occupied Denmark in the 1940s.

At least one student brought forward complaints about Eikrem’s conduct to CCC administration, as well as to their high school counselor as they were dual enrolled at the time.

Julia Holloway, 18, is a former CCC student and actress who played Mrs. Rosen in the spring show. Holloway was 17 during the production. She says Eikrem was taking creative liberties that were not meant to be taken.

“Jim was using his power in an inappropriate way to bully people, and in a retaliatory fashion,” Holloway said. “Like, somebody would speak out against something he was saying; he would bully them the next day, or if somebody said something he didn’t like, he would nitpick them until they were upset.”

“I know for a fact that (Eikrem) misgendered me and (another trans student) a decent amount,” he said. “And I don’t think that’s good for anyone.”

“That shouldn’t happen,” he said.

According to Antlitz, Eikrem made several odd choices as director.

Eikrem chose to include and coach a scene in which two young girls – one a minor at the time – were made to wrestle on top of each other in a manner and for a length of time that made several cast members uncomfortable.

“It was disturbing, because there were questions at that point about why (Eikrem) felt the need to have little girls wrestling on the ground for that long in front of (him),” Holloway said.

Hannah Jacobs, 18, played Annemarie in the spring production. Jacobs did not have the same grievances as other students in the production.

“I definitely think that each interaction I had with Jim was nothing but professional,” Jacobs said.

Eikrem has taught theater at CCC since 2012, according to his LinkedIn profile. Prior to that, he taught for 10 years at Central Michigan University.

The Clackamas Print reached out to Eikrem regarding his termination. Eikrem said, “I don’t have a comment on that.”

This is an ongoing story, and will be updated as more information becomes available.

Laura Canida and Hailey Reeves contributed to this story.