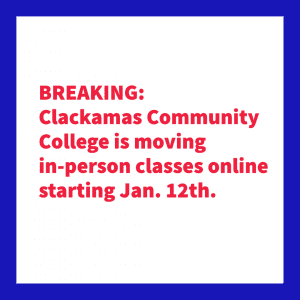 Clackamas Community College is switching in-person lecture classes to remote Jan. 12- Jan. 28,  due to increased COVID-19 cases in Clackamas County and at CCC, according to an email from President Tim Cook to staff on Jan. 7th. The college plans to keep some lab and career technical education courses in-person.

“I know this will be disruptive for many, but the sheer volume of COVID cases is straining our health care system and we are putting people at risk. Also, the number of confirmed cases at CCC has strained our ability to keep buildings open due to the required cleaning after reported exposures and increased workforce absences due to illness,” said Cook.

There were two confirmed COVID-19 cases on campus over winter break, and 5 during the first week of winter term, as well as one potential positive case, according to the emails sent to the college community whenever someone who has been on campus tests positive. During fall term, there were no confirmed cases until week 3, and 10 cases during the entirety of the term.

It is also possible that the college will extend these changes past January 28, according to President Cook. A decision will be made by January 24, and will depend on COVID-19 case rates.

CCC had  initially planned to make student services available in-person starting Winter 2022, including opening the new Wacheno Welcome Center, where most student services are now located. That decision was reversed right before the beginning of winter term after an increase in COVID-19 cases in Clackamas County.

During fall term, a limited amount of student services were available to students in-person, including counseling and resources for students with disabilities. According to Tara Sprehe, the dean of academic foundations and connections at CCC, those services will remain available. “We will still do all of that. It just is by appointment only instead of being able to open the building up like we wanted to,” said Sprehe.

Student services provided by the Student Life and Leadership department including free chromebook rentals and food boxes will also continue to be available in-person, but the department will be taking more precautions including having only one student and one staff member in the building at a time.

“Since the onset of this pandemic, the health of our community has been our first priority. I am hoping this is just a short step back that will get us in a healthier and safer position in the next month. I thank you for your continued patience, adaptability, and perseverance through this,” said Cook.