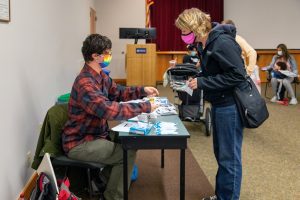 Clackamas Community College won’t require COVID-19 vaccinations for students involved in in-person activities at the college, after asking thousands of students to weigh in on the matter.

Despite the varied opinions, the college said it won’t require vaccines.

Board of Education member Greg Chaimov said there is concern that a vaccine mandate would deter students from coming to CCC.

“Clackamas, particularly in comparison to most other community colleges, has a large section of its student body that is in communities for which vaccines are challenging,” said Chaimov. “Rural students, BIPOC [Black, Indigenous, and People Of Color] students, students who come, for example, from countries of the former Soviet Union, where they don’t trust the government very much. Those communities make up a fair chunk of our students, and the administration told us that if we did impose a vaccine mandate, we would likely lose most of those students, and we didn’t want to do that.”

While many four-year schools require a COVID-19 vaccine for students, including University of Oregon and Portland State, not many community colleges in Oregon are requiring the vaccine for students on campus. Lane Community College in Eugene and Clark College in Vancouver in the Portland metro area are among the few two-year schools requiring students to get vaccinated.

The Board of Education was considering a vaccine mandate for employees in July 2021, but voted against enacting one. Then, in fall 2021, CCC was waiting to see if there would be a federal vaccine mandate.

“If the Supreme Court had not struck it down, the Board, at that point, was looking at how we would do that for faculty and staff, it didn’t include students,” said CCC President Tim Cook during an interview with The Print on Feb. 3. “And so there had been work going on up until January (2022) in anticipation of that passing.”

Tara Sprehe, Dean of Academic Foundations and Connections, in an email to all CCC staff on Feb. 3 that stated, “At this time, CCC is not mandating vaccinations for employees or students. The U.S. Supreme Court struck down a federal vaccine mandate, and Oregon OSHA [Oregon Occupational Safety and Health] announced it will not seek an employer mandate.”

“If the Supreme Court had said that we had to require vaccines for faculty, we would have taken another look at whether to require it for students, but we had already made the decision not to for students,” said Chaimov, who represents Milwaukie Zone 1, on the CCC Board of Education, in an interview with The Print on Feb. 10.

The college sent out a survey to students regarding a potential vaccine mandate on Jan. 11, shortly after they announced the decision to pause most in-person instruction and other in-person activities due to the uptick in cases being reported in Clackamas County, as well as an increase in the number of cases on campus. Ashley Sears, the Director of Institutional Research & Reporting at CCC, put together a report analyzing the results of that survey on Jan. 26.

For students who reported being fully vaccinated, 44% said they would be more likely to enroll in spring term classes if a mandate was put in place, while 47% said it would have no effect.

The report noted that “It was apparent that some students were not truthful about their vaccination status (saying they were fully vaccinated when they are not) based on the comments they left in the text boxes. This data was not corrected prior to analysis. It is not possible to say how many students were not honest when relaying their vaccination status. This makes the analysis less reliable.”

The college has had much lower enrollment rates during the pandemic, as of February 2022, enrollment was down about 25% from fall 2019, according to Jeff Shaffer, Dean of Business Services.

Tuition makes up around a third of the college’s budget, so if a vaccine mandate triggered another drop in enrollment that would put strain on the college’s financial situation, which could lead to a larger than normal increase in tuition, or certain student services being removed.

CCC tuition is currently $111 per credit and the Board of Education will be voting on a 5 or 6 dollar per credit increase at their next board meeting in March, 2022.

If the pandemic were to take a turn for the worse, it’s possible that the Board of Education would re-consider a vaccine mandate for students.

“We would, any time circumstances change, consider what’s best for the college community. If requiring vaccines were what was required to have the college run as appropriately as possible then we’d do that,” said Chaimov.

President Cook, however, said a mandate in the future is doubtful “I think it’s highly unlikely that they would ever go back on that requirement.”

“There would certainly be health advantages to having as many people as possible vaccinated,” said Chaimov, “We decided to encourage the students as much as possible to get vaccines, but not to require it for attending.”