Lewis said he was disappointed and frustrated with their inability to get another result or two in the back half of our season. “I was satisfied with our overall season and our ability to battle through illness and injury to finish the season,” he said. “I was inserted as the coach so late. I was pleased we scrambled and had a team that was very competitive in the South division and I am very optimistic going into my first recruiting season.” 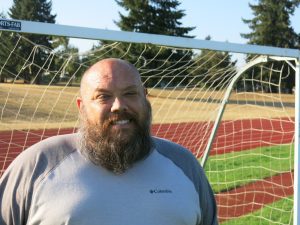 Lewis came to CCC with over two decades of coaching experience. Getting his start at the age of 20 at Portland Christian High School, Lewis has been a coach, he said, “his whole life.” After three years at Portland Christian High School, Lewis held the head coaching position at Gladstone High School for 16 years. Lewis remained at Gladstone while starting a family. Taking a few years off from coaching as his daughter grew up, Lewis then returned to Gladstone to coach again as his own child attended and competed. After another four years at Gladstone, he finished there in the fall of 2021.

“I’ve done lots of other coaching for clubs, summer camps and all different types of things,” he said, “but as far as team coaching, (I have) 23 years of high school coaching along with different clubs.”

Lewis had to act fast when taking the job in late May 2022 just to ensure the team had enough players to fill the roster and avoid forfeits.  He used his contacts to grow the team quickly, such as finding players who have had a few years off since their last competitive games.

“Historically, over the last four or five years it’s been difficult for CCC to acquire numbers, for whatever reason, so I put a lot of importance on it initially to make sure that we had a team, so that we could move forward and not have to forfeit or cancel games,” he said. “I was able to recruit five or six players; had to do some out of the box thinking.”

Lewis has maintained a pragmatic approach to squad building and tactics. In the future, he could look for specific players with attributes allowing tactical changes and a specified style of play. However, Lewis said he remains focused on “going through the process correctly every day,” and making sure the team continues to improve.