Clackamas Community College’s athletic affluence is well known, but the one sport in which the Cougars dominate is wrestling. The CCC wrestling team here has many awards under their belt. New coach Brett Sanchez has been on the team as a student athlete, and is ready to win more trophies from a different standpoint. 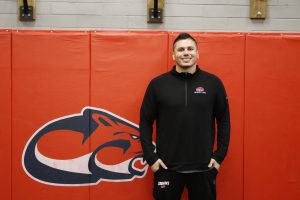 The Clackamas Print: Why did you choose CCC?

Brett Sanchez: “So I was actually a student athlete here myself. I was recruited over here by a coach Rhoden in 2008, and I wrestled over here in 2009 through 2011. So, being a student athlete here, I fell in love with the culture. I fell in love with Oregon City. I fell in love with Clackamas Community College. I wasn’t the greatest student, but being over here, having the instructors and having a great supporting cast behind me just made me fall in love with CCC. So, once I graduated, got my bachelor’s degree, I knew I wanted to start coaching wrestling and I had the opportunity to start coaching over here at CCC, so it was kind of a no brainer for me. I was the assistant coach here for a few years and ended up getting the head coaching job this year.”

TCP: What made you coach wrestling?

Sanchez: “Growing up, I was a three sport athlete. I did football, wrestling and baseball. Ry “Growing up wise, you know, what’s crazy is wrestling was my least favorite. Favorite football, then baseball and wrestling in that order. I was pretty successful and competitive in all three sports. When it came to graduating high school, I had an opportunity to either play college football or do college wrestling. I went on a couple of recruiting trips for football and saw how political it was. In wrestling, there’s no politics behind it at all. If you’re the best person in whatever way you want to go, you have an opportunity to wrestle for that starting spot. So I ended up choosing that wrestling route for college. Ever since I did that, I fell in love with it even more than competing in it in college. Once I had that and had great mentors as coaches, I decided as I was training that I wanted to do this for a career. So that’s where I’m at right now.”

TCP: What age did you start wrestling?

Sanchez: “I started wrestling at the age of four, I am 32 right now. I’ve been in the game for 28 years now. So yeah, pretty much that’s what I know, if I don’t know how to do anything else.”

Sanchez: “Okay, so we’ll start off with the CCC favorite memory. I would have to say when I was competitive over here, 2011, we won a national championship. That coach wrote his first national championship here as the head coach. So, that was a great experience for me and I know it was a great experience for the team. That honestly started the new era and that domination for us to start getting things going over here. After 2011, we won another four national championships and I would like to you know, I think that our year, my sophomore year here was the start of that dominance decade right there. That’s probably my favorite memory as a competitor. Outside of CCC, probably just being a little guy wrestling and having my dad in my corner taking me to wrestling practice, teaching me life lessons and life skills, and preparing me for those moments. That’s when it was fun, right? Then when you get a little older it can get a little more competitive and more business, but when it’s a little kid wrestling, it’s definitely at its widest right there.”

TCP: What’s the hardest part of being a coach?

Sanchez: “Hardest part of being a coach I would say is making sure all your athletes are healthy and making sure everything’s going well with their personal life. I would say just making sure all those life stressors are taken care of. Not all of them are from Oregon, you have to make sure that they’re not feeling homesick, and a lot of them are on their own for the first time too, so I have to help them out. My coaching staff does a really good job with it to help out with any problems that presents to them. I would say that probably the hardest thing is just making sure that they’re taken care of at all times, and the rest of it is what I love and enjoy.”

TCP: What is your favorite thing about coaching?

Sanchez: “My favorite part is just seeing my student athletes grow and succeed. I think great coaches are always encouraged and they want their student athletes to be better than they were in all aspects. How they carry themselves outside the wrestling room, how they prepare themselves and approach the wrestling room, everything like that. When you see them develop and progress in the right direction and see when they achieve their goals, I would say that’s probably the best part of why I love this so much. You know, when I see my athletes play at the national championships, they become national champions and move on to the next level and get their school paid for it sets up their lives and their career. That’s probably the best feeling honestly, better than anything. It’s what brings you back the next day, yeah, it really brings you back the next day. When you see your student athletes come in excited, ready to come into your practice, then you’re doing the right thing, you’re doing a good job, right?

TCP: Have you had any challenges being a new coach here at CCC?

Sanchez: “I would say hard moments are just when injuries happen. When you have a student athlete that is working, they’re working their tail off, and they have high expectations, high, high goals for themselves and then you have setbacks, which are injuries or personal life situations that appear, that’s my job to kind of help them stay positive. To make them think about the big picture in that moment, and remind them that this is only temporary, you know, there’s going to be things like this coming across your life in general with anything you do. That’s probably the most difficult part is just trying to continue to motivate your athletes when those bumps come across the road.

TCP: Any goals for this coming up season?

Sanchez: “Absolutely, there’s a lot of eyes on us, we do have a target on our back. We won four consecutive national championships here. We’re tied right now with Iowa central, with the most consecutive national championships. Being the new guy, new head coach, a lot of supporters, alumni, people who really follow our program are making sure and asking me if we’re gonna be able to get number five. We do have that goal of possibly getting ourselves in position to win number five, at the end of the day, we’re still going to try to prepare ourselves the best way we can. My goal is to make sure I get these guys dialed in, in the wrestling room, I got them dialed in the classroom too, because we also have another goal for ourselves that we have never achieved. We want to be national champions academically, meaning we have to have the highest team GPA throughout the country in the NJCAA where we compete. I’m gonna try my best to check all those boxes.”