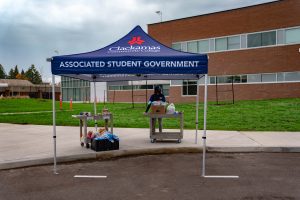 Classes that were in person at the beginning of winter term 2022 will return to being in-person starting Monday, Jan. 31, after being remote since Jan. 12, according to an email from Clackamas Community College President Tim Cook to all CCC staff on Jan. 26th. Student services that were initially scheduled to be available in-person during winter term are still remote, and CCC has not yet made a decision about when they will return.

Not all in-person classes will resume immediately, however, “Faculty who wish to remain online a bit longer and are able to do so, should talk with their deans and department chairs. We want to be flexible for what works best for you and your students,” said Cook.

At the beginning of winter term there were one third as many in-person courses offered compared to before the pandemic. After the sharp rise in COVID-19 cases in Clackamas County, and a rise in the number of cases being reported at the college, the decision was made during week 2 of the term to pause most in-person activities for two and a half weeks.

When Cook made the email announcement regarding the decision to pause in-person instruction, he stated that the college might extend the closure into February depending on COVID-19 case rates in Clackamas County, and that a decision would be made by Jan. 24. On Jan. 24, he emailed all CCC staff stating that the college needed more time to make a decision, and the resumption was announced two days later.

Some classes remained in-person over the pause, mostly Career Technical Education courses. Limited student services were also available on campus including the bookstore, food pantry, and Chromebook rentals from the Associated Student Government; most other in-person services that had been available at the beginning of the term, such as counseling, were moved remote, and will not return in-person yet.

“Student services that were planning to return to campus at the start of winter term are still on hold. We will work with those service areas to determine when a return to our campuses is feasible. We are committed to adapt and change direction as needed based on the number of COVID cases in the county,” said Cook.