America, you are ugly and so beautiful

Story and photo by Kristen Wohlers

I noticed it the instant I walked off of the plane into Washington, D.C.’s Reagan National Airport. It was something that, as an Oregonian, I thought I’d seen. It was diversity. 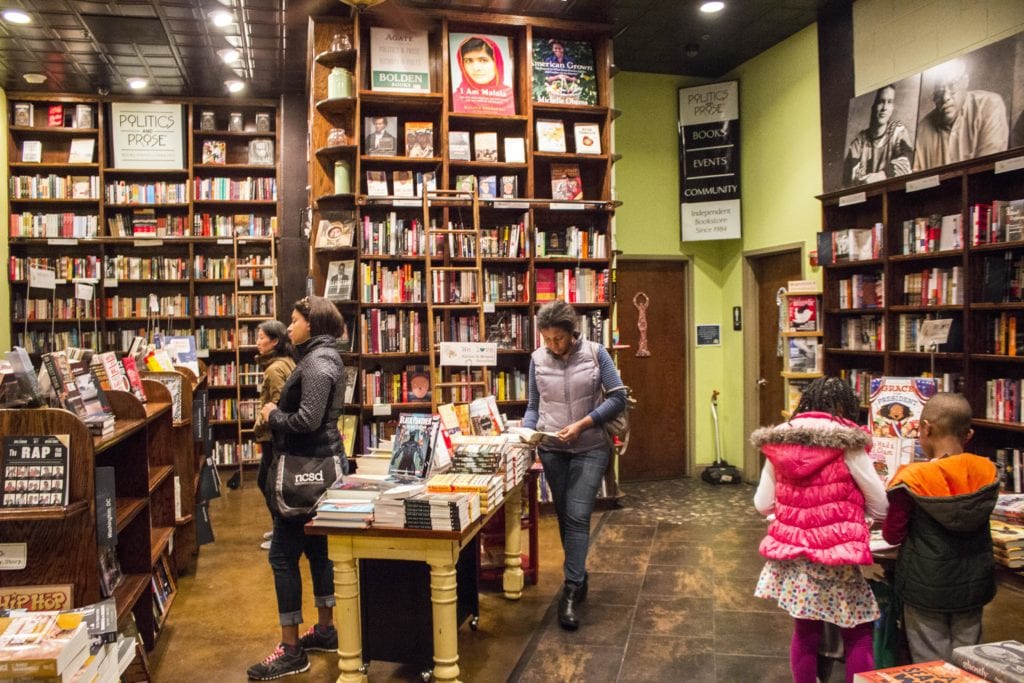 People brows the books at Politics and Prose, the bookstore withing the restaurant Busboys and Poets on U Street in D.C.

Scattered about me were people with dark skin, light skin, wearing headdresses and speaking in other languages or with various American accents. And it was beautiful.
In the literature class I’m taking, at Marylhurst, we’ve been reading stories by African American authors like James Baldwin, Ta-Nehisi Coates and Edward P. Jones. Their stories have much in common, including that they speak to life as an African American and that they take place on the East Coast. Baldwin grew up in Harlem. Coates went to Howard University. Jones talks of D.C. and Virginia.
So when I stepped off of the plane, walked through the airport, rode through Virginia on the Metro, emerged from the underground escalator into D.C., and stepped foot into the restaurant Busboys and Poets on U street, I couldn’t help but feel like the pages I had read had come to life right before me. I experienced what every reader dreams of: being inside a book. And it was beautiful.
With racial tension high in America and as I read these emotional stories from black American authors, walking the streets of D.C. made me feel like I was a part of it all.
When I opened the door into Busboys and Poets, my eyes grew large, because books were everywhere and because those books weren’t the same as the ones in the Portland bookstores. The shelves were teeming with writings by people of every color.

And it was beautiful.
I visited the National World War II Memorial and as I gazed at each star which represented 100 lives lost, I stood still and remembered my fellow Americans, of every color and culture, who had died fighting for me. I walked along the reflection pool and towards the Lincoln Memorial, overcome by emotion; with the Washington Monument, and the World War II memorial, and the darkness of the sky and the light of the moon staring at my back. I reached the memorial and my camera flashed as I snapped a shot of the very spot where Martin Luther King, Jr. stood to give his speech, “I have a dream.” And I felt like I was in a dream. And it was beautiful.
I walked through the Newseum and mourned all over again as I looked at the newspapers—cover after cover of the pain that so many have experienced. The tears escaped unashamedly as I remembered the day when so many lost their lives as a result of the 9/11 attacks. That day was ugly. So many days were ugly. The war on terror has been ugly. Racism is ugly. The race to the United States presidency has been ugly.
With so much ugly, I choose to revel in what’s beautiful. A nation where people who look different from one another can walk the streets together, and can even love each other. Where people who died fighting for the flag are honored with statues and fountains. Where imperfect candidates can pursue the presidency and where imperfect people, like me, can vote. Where things are actually, physically, utterly beautiful.