The Eugene rain detours no one

Story and photos by Elizabeth Kessel 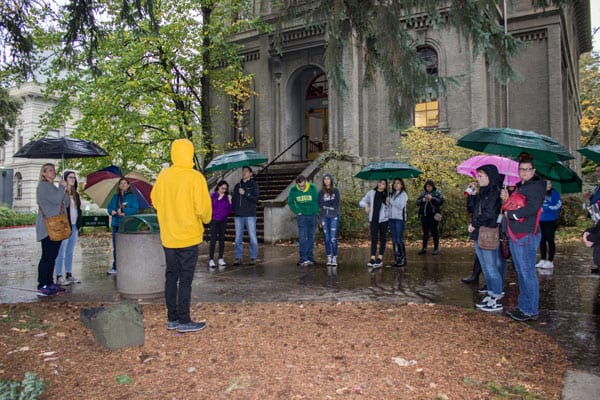 Potential students listen to the tour guide talk about Deady Hall, built in 1876. It and Villard Hall are National Historic Landmarks.

.
I can’t say that I was surprised when it rained during my college tour at University of Oregon on Saturday, Nov. 5. After many U-turns (that I’m sure weren’t permitted), and between myself, my friend Jaime and Google Maps I finally found the Ford Alumni Center.

At check-in, I learned that we would be sitting for a 30-minute talk and then going on a 90-minute walking tour. After driving for two hours, I wasn’t very excited to sit down again.

The talking portion was informational, but as a transfer student some of the information wasn’t helpful. Parents accompanied many of the students because most of them were incoming freshmen. UO’s website does show tour dates specifically for transfer students.

Many students came from other states, including California, Oklahoma and Nevada. So when our groups were led outside, many people took the umbrellas offered, but as a true Oregonian I decided not to use one. (Halfway through, I regretted my decision).

The tour was simple. Our group went from building to building in a circle until we reached the Ford Alumni Center again. As a journalism major, everything was exciting to me no matter how simple our walk was.

Along with learning facts and information about each building, I took in the scenery and possible story ideas. I noticed a bunch of tiny red flags in some parts of the lawn. Called the Red Zone campaign, the flags are meant to raise awareness about sexual violence and the prevalence of sexual assault within the first six weeks of a term.

The scenery was interesting, but learning that UO has seven libraries was impressive, too. P.S. my favorite building was Allen Hall where journalism classes are held.

I don’t know which part of the tour made more of an impression on me: the rock wall in the gym or viewing the “shittiest” smallest dorm room. The rock wall was exciting, and if someone needs to find me, they know where to look. Use of the fantastic gym is included in student fees, so students don’t have to pay for a membership. But on the other hand, I had been itching to see a dorm room in person rather than online.

Even though the dorm room is small, it’s livable. The tour guide told us that the tight space forced him to get out and explore.

I found that the student life there is pretty awesome. The Erb Memorial Union is a place for students to hang out and eat. With a Chipotle and Starbucks close to each other, why would students want to go anywhere else? Other than food, the EMU also hosts bands and singers every now and then.

Since my tour was on a Saturday, I didn’t expect to see many students out especially on a rainy day. But on the field outside the gym, a bunch of students played soccer in the rain, and a huge group of people shouted and cheered them on. Music was blaring, and even from a couple blocks away I could still hear the crowd cheer.While I was amazed at the college I will potentially attend, I only cried twice about how much debt I would be in as a result. As an undergraduate, according to UO’s website it will cost (give or take) $25,815 per year for Oregon residents.

But the cost shouldn’t discourage anyone from applying. There are many scholarships available as well as financial aid.

At the end of the day, even if the tour was meant more for freshmen I still learned a lot. I’m happy I decided to go because it was informational. I am excited to see if I get in. This is a perfect fit for me and I hope it could be for other students too.