Karin Power was sworn in to an appointed position as a director on the Clackamas Community College Board of Education on Sept. 21, 2022.

Power takes the position vacated by Greg Chaimov, who left the board position early in order to spend more time with his grandchild in Vancouver, Washington.

Power edged out applicant Deb Barnes, who teaches media and communications North Clackamas School District largely due to her legal and legislative experience. 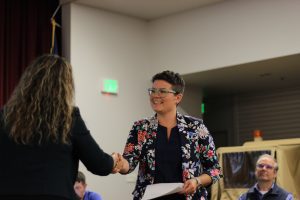 Power will hold office until June 30, 2023, and is eligible to run for a four-year term on the board during the May 2023 election cycle. Photo by Ethan Rogers

As a lawyer and former representative to the state legislature for Milwukie’s district 41, Power brings with her the experience and skills that the board once relied on Chaimov, also a lawyer, to provide.

Though the board position is new for Power she was active in the college’s Summer Connections event – which stood out to CCC President Tim Cook who lent his voice in support of Power when asked by the board for input.

“I appreciate the conversation,” Cook said. “I think I saw the same things you saw after last week. Both are very, very talented and, I think really, care also about the college. Really impressed with the work they had done. Cut to the chase, I think Karin Power’s past legislative background would be really helpful for us.”

“You can disagree without being disagreeable or without making it personal,” Power said. “I think that’s part of the work of leadership and to set the tone for how you want other people to develop their own leadership.”

Power will hold office until June 30, 2023, and is eligible to run for a four-year term on the board during the May 2023 election cycle.

Cook said Power has “been engaged in other work with us, she’s worked with us a little on some childcare issues and some other things moving forward.”

“It is just an unexpected gift to have this board vacancy,” Power said during her interview with the board. “Over the last couple of years, I have been working most especially on access to child care as a workforce issue, as an education barrier, as an underinvestment in the littlest kids in a way that really holds back women, moms, from being able to participate in the workforce.

“It’s important for board members to be out in the community and representing broad sections,” Power said in her interview, “not just their district but at events and seeing what folks are experiencing, listening to the barriers to education – so you’re being mindful not just delivering high quality, affordable education for folks but are they able to get there? And, if not, how can we figure out how to help them get there? And then, once they’re there, be successful.”

Power is concerned with barriers to opportunity such as food insecurity and housing insecurity: all the external factors that most people take for granted but which can stifle a person’s ability to grow and learn through education.

“I think of community colleges like I do our libraries,” she said. “I wish they were also free but that is not where we are.”

“Finding people where they are,” she said, “helping them to see pathways to whatever success means for them. That might be a couple classes here and there to learn a new skill. It might be a new career pathway. It might be more credits to get ready for college as a high-school student.”

Power decided not to seek re-election to the state legislature, along with two other female legislators, due to a lack of childcare.

“I would love to see more support in the entire pipeline of career development around affordable childcare,” Power said, “it is the lynchpin that we are missing in helping people be able to go to school, look for work, have kids have stable places to learn and play when they’re little and frankly lift people out of poverty. That, to me, would be a meaningful success.”