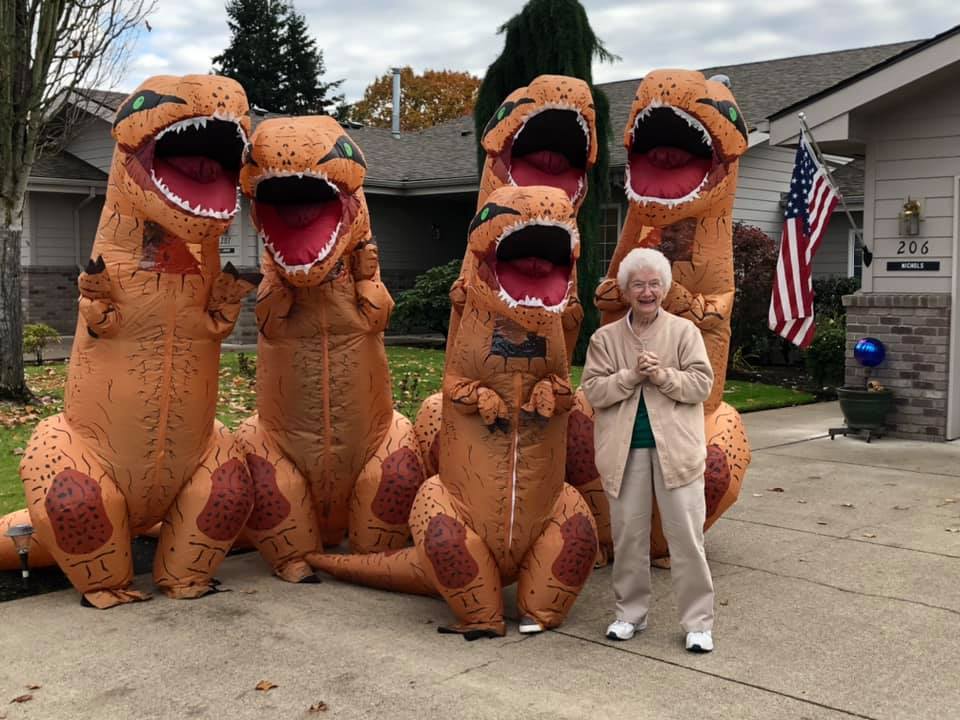 the T-Rexes outside with a resident of hope village in Canby. Photo courtesy of Canby T-Rex Family.

A herd of Tyrannosaurus rexes have taken Canby, OR residents by surprise, bringing a much needed distraction to a hectic 2020. They have appeared at the most well-known spots around Canby including the weekly Farmers market and the local Fred Meyer along with the Downtown area.

The Clackamas Print: When did all this start with the T-Rexes roaming around Canby?

David: Oh, probably the beginning of October I believe.

TCP: How many of you are dressing up?

David:  So I’ve got three boys. And so, my wife usually has a stand in; one of the kids’ friends will stand in for her. So there’s all five of us costumed up and ready to go. 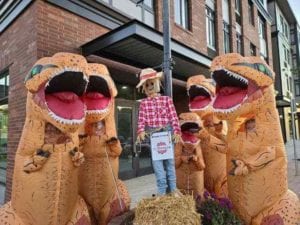 The T-Rexes outside of The Dahlia in downtown Canby posing next to a scarecrow. Photo courtesy of Canby T-Rex Family.

TCP: Is there a reason you all started dressing up as T-Rexes?

David: Just kind of on a whim, my wife works overnights and she sleeps during the day. Me and the kids were going to run to the grocery store and got sidetracked. We didn’t have Halloween costumes yet and wound up going to the costume store. We came across the inflatable T-Rexes and I thought, “that’s great”, then we went home and decided to try them on, of course. We went into her (the wife’s) bedroom in the middle of her sleep schedule and made her get up to take us to the store. It was supposed to just be an initial cookie run, we’re going to get cookies for the evening; we had some company over with us and they’ve done one of the costumes for us because I couldn’t convince my wife to wear it. And so it just was a cookie run. I mean, within minutes It was up on Facebook, and my wife was part of the Canby Now group, and she’s seen it as soon as it got posted and it has just become a regular thing.

TCP: What are some of the reactions you guys have had while you’re out?

David:  Um, I think my favorite thus far has definitely been going to some of the senior living facilities or communities. I think we get a better reaction out of the elderly than we do the kids. Honestly, it’s kind of hard to explain. I think because of their situation, because they are in a more isolated state there. I mean with the pandemic going on there, they’re more concerned. I think the elderly are really missing out on a lot of community sense and things to enjoy. We just moved here not that long ago so this is a fairly new community to us. I definitely enjoy involving my kids in it. I think that’s something that they can appreciate and hopefully as they get older and learn to utilize, being able to reach out into the community and help people and just give them a smile.

TCP: How long have you been here in Canby?

David: Three years now. We’re established but it’s still, I mean, it takes like five to seven years to make a place home so we’re still definitely trying, and it’s even harder with the state of things now.

TCP: These new COVID restrictions are going to make it a little bit more difficult to head out. Are you all planning on going out anytime soon?

David: So, the suits themselves are pretty much… I can’t swear that they are as effective as hazmat suits, but they are made out of a plastic material. I mean, as far as I know, an airtight seal because they do hold air. I mean they’re inflatable. And so, I don’t see the new restrictions hindering us at all for our regular antics.