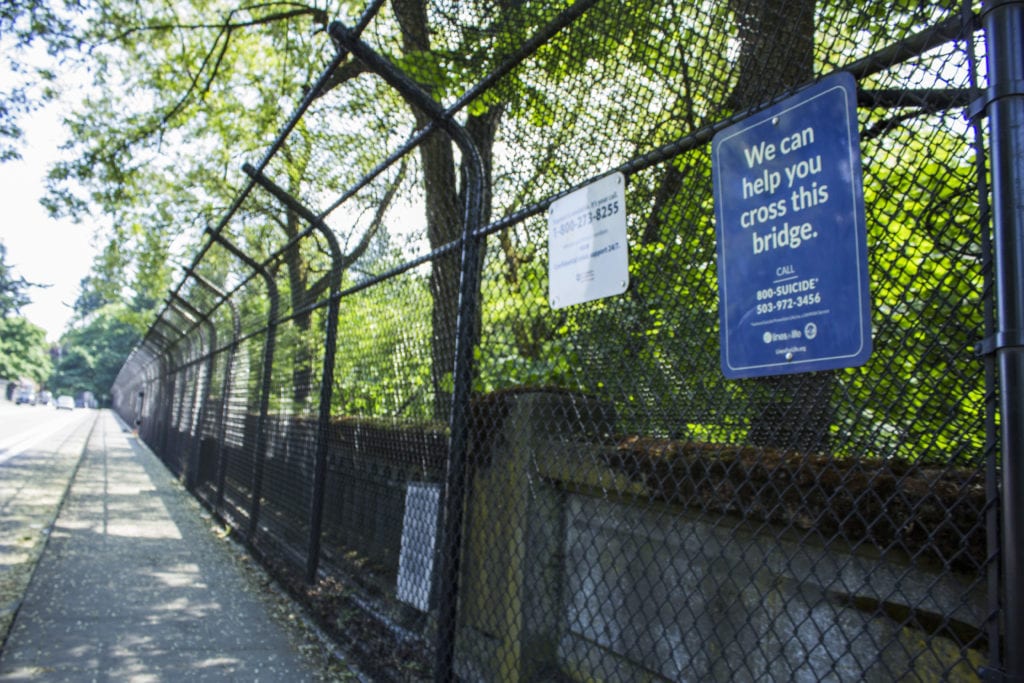 The Vista Bridge is nicknamed “Suicide Bridge” due to the high number of suicide attempts from the bridge. Following three fatal attempts in 2013, a suicide barrier (pictured) was added to help disuade further attempts

Over the years, I have known several people who have contemplated suicide. Many more have expressed feelings of depression or despair. In each situation, with the help of friends, family, and in some cases counseling, they were able to escape the feelings of despair that had overwhelmed them and nothing ever came of those thoughts. Four years ago, that changed.

Shortly after the death of my great-grandmother, a close relative of mine lost her spouse in a sudden and unforeseeable way. Because of the circumstances that surrounded the loss, she blamed herself. Though the fault certainly did not fall on her, the loss was understandably shattering.

Even before the death of her husband, she had always struggled with abuse she had experienced during her childhood and had used alcohol as a coping mechanism.

Afterwards, this was accentuated even more. She became verbally abusive towards those around her and, in many cases, ended up driving everyone away that attempted to help. It wasn’t long after that she first expressed a wish to die.

Though it was not the first time I had heard someone express this wish, it was the most shocking. Perhaps because it was family this time, or because of how involved in the situation I was, but it felt different. It felt sincere. The next couple of years passed much like this, and no matter what anyone attempted to do to help her, no matter how much myself or others tried to convince her to see a counselor, she refused.

Finally, about two years after her husband’s death, she went back to work and eventually met and began a relationship with another person. This seemed to help, though her abuse of alcohol continued.

Then it happened. One night, after she returned home from her job, she poured herself a glass of wine. And then another. And another. An hour or two passed before her boyfriend noticed the bottle of Xanax that had been prescribed to her to help combat her depression was empty. The two fought, with my relative claiming it was empty to begin with, but luckily her boyfriend informed me of the situation and we were able to call an ambulance and get her to the hospital in time.

We were not able to see her until the next day, and though she was out of the woods, she looked as if death itself loomed beside her. For the short time that she was conscious, she could barely reply and she was hardly lucid. The doctors informed us that she had, in fact, ingested the Xanax, along with other common painkillers. It took another two days before she was discharged from the hospital and a few more before she fully recovered.

Though this was the only true suicide attempt she made, before she was able to recover from losing her husband she would attempt to harm herself on one occasion. Shortly after she began to see a counselor, something I believe truly helped her work through much of the pain that had built up from her past.

Though she managed to recover, there are many that do not. According to the National Institute of Mental Health, suicide is the tenth leading cause of death in the United States and the second among ages 15-34. Over the last 15 years, total suicide rates have increased about 24 percent. Men are also four times more likely to attempt suicide than women. Oregon’s suicide rates are also substantially higher than the national average. In 2015, the average national rate was 13.26 per 100,000 individuals. Oregon’s sat at 17.77.

The American Foundation for Suicide Prevention, a non-profit organization dedicated to suicide prevention also states that these numbers may not be 100 percent accurate. It is likely, if not certain, that the actual numbers are higher than the available data states, due to the stigma surrounding the topic of suicide. This stigma has discouraged some from reporting or possibly even from seeking the help that they need.

Our society has a problem with mental health. Though we have more resources for those who seek help than ever before, our society still looks down on those who choose to take advantage of those resources, and looks upon those that attempt suicide as weak or selfish. It is imperative that we move away from these assumptions if we are to have any success helping those that truly need it.

“The year before last we did a suicide awareness event,” said Schaefer. “We had people put yellow ribbons up if they had ever thought about or attempted suicide, and then another ribbon up for every person they had lost or they knew who had attempted it, and there were a lot of people putting up ribbons that you would not expect.”

David Klein, a counseling intern at CCC, also had some ideas on how to remove the stigma.

“Be pretty open about what suicide is at an early age,” said Klein. “That starts with education, talking about what depression is, what it feels like, what suicide is. I feel like suicide is a word that I didn’t really know or was very taboo until I was in high school.”

He added, “It wasn’t really talked about. Getting it out there, desensitizing it. There are some people whose parents might be struggling with depression, who might have committed suicide, so it’s part of their lives before we’re really talking about it.”

What can you do to help someone who is suffering from suicidal thoughts or depression?

“Accessing your counseling services is a good way to start,” said Klein. “Here at CCC we have people who come in who say they have a friend who is experiencing X, Y and Z, and what can I do? We have a couple of good resources here that have good information, some that show the signs of suicide or signs and symptoms of depression with numbers to call in an emergency.”

Be supportive and don’t be afraid to speak up if you believe they could potentially be in danger. Urge them to see a professional, and do not leave the person alone. If you do believe they truly intend to harm themselves, or if they are in the process of hurting themselves, contact emergency services.

As a society, we have made great strides to improve how we handle mental illness. The Unity Center for Behavioral Health located in Portland, for example, is a fantastic resource for people struggling with mental health that need immediate, professional services. We are, however, still a long way from where we need to be. As long as people continue to feel uncomfortable seeking help for these issues, or feel weak or lesser for having the issues to begin with, we are failing them.