A stitch in time to save veterans’ lives 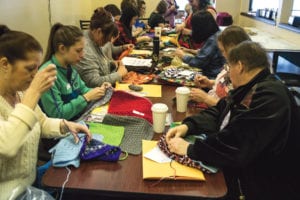 The blinding sun shone over Canby as the Stitch Together party was underway. The event attracted volunteers to help make blankets for the Blankets for Veterans project.

Organized and hosted by Sandra Breuer and Erin Roff, the event took place in the community room at Cascade Pizza Co., which is next to Canby High School. Volunteer enjoyed delicious, homemade pizzas while stitching blankets.

A home-grown business, Cascade Pizza Co. has only been open since last August, but they said they hope to begin taking their place as a community fixture.

“We want to be a resource and celebration, or gathering place for the community,” Roff said of her involvement with the project. “Our group room is always free to use for events for groups like this, and we always provide a 10 percent discount to first responders, veterans, active service members, and community servants. It’s something we’re very passionate about.”

Fait has been baking professionally for roughly eight years. Though she hasn’t officially signed the lease yet, she will be opening “Baker’s Prairie Bakery” in Canby, in time for the next school year.

“Before Canby was named ‘Canby’, it was called ‘Baker Prairie’, Fait said. “So it’s a bit of a play on the old name.”

Liane Tankersley, and her daughter Quinn Calhoon stitched together blankets at the event. She said she’s stitching today, but wants to learn how to knit and crochet to make the squares for blankets in the future. She and Calhoon Quinn cut out the red “CC” [Clackamas County]  hearts for the blankets.”

“I plan to continue on with the program as it grows,” said Tankersley as she and her daughter cut out red hearts with “CC”, which stands for Clackamas County, for the blankets. “Volunteering gives me a personal sense of happiness through serving others, and this project is fostering a sense of community within the county. It’s also fun to get to know people from other parts of the county. It’s just such a great idea.”

The Stitch Together project, which been exclusive to Clackamas County employees, is becoming a 501c, a federally recognized nonprofit organization, and will be open to the public, Breuer said. She added that she plans to change its name to “Yarnivores 4 Vets.”

With this new incarnation of the program, volunteers will be able to contribute more items than just blankets for veterans, but scarves, hats, and pet blankets, too.

“At last count, we had over 56 volunteers,” Breuer said. “We’ve had a member of our public housing maintenance department create two blocking tools, and my manager donated monetarily so we could purchase the handled storage bags for the blankets. I’ve received enormous amounts of support from the county, my management, county employees and the community at large; it’s been amazing.”

Volunteers don’t need to know how to knit or crochet to be involved, Breuer said. The hope is to welcome many new individuals into the group as expand their project.

She added that people can even help by contacting veteran support organizations and letting them know her group is around and willing to help out. Another way to be involved is delivering resources to veterans in need.

“We’d love donations of crochet hooks, knitting needles, money for supplies, or yarn as well,” Breuer said. “ I want to thank everyone that has supported the group and volunteered in any capacity to our cause. You have all made this group flourish into what it is today and laid the foundation for where it will be, in three, four, five months from now. Thank you, from the bottom of my heart.”

For more information on how to get involved, contact Breuer at: sandra@yarnivores4vets.com.