All aboard the Admiral Mann 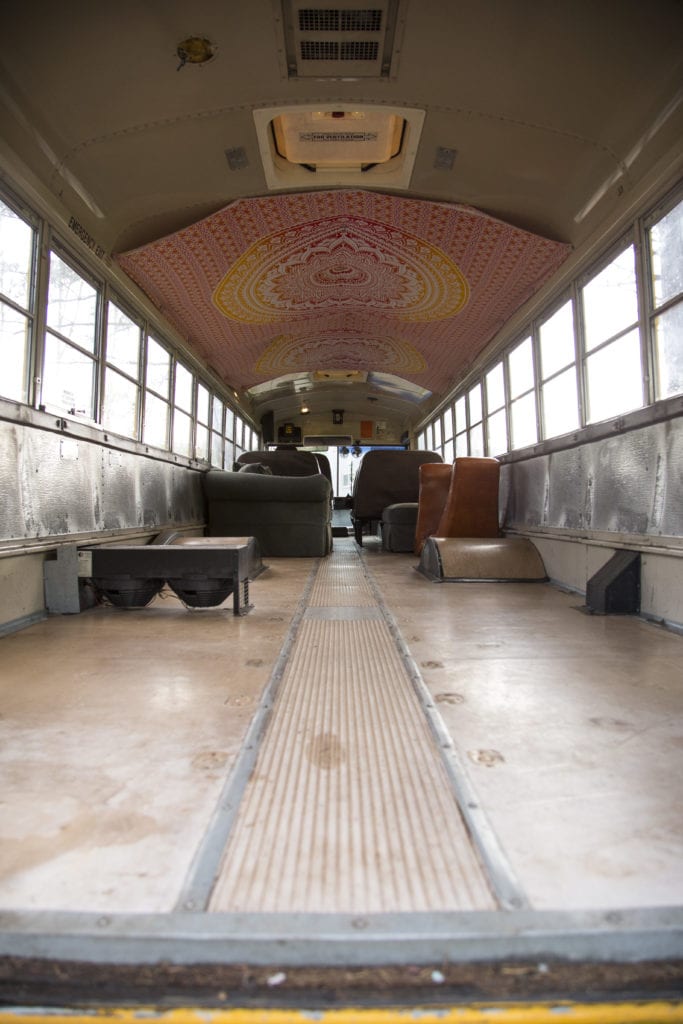 Renovations on the bus began with the removal of the seats and the addition of a sofa. Dru Urbassik plans to add a bedroom, kitchen, a lounge area and a garage.

COLLEGE EMPLOYEE BUYS SCHOOL BUS TO RENOVATE INTO AN RV

The college’s director of curriculum and scheduling is in charge of many things behind the scenes at the campus. Dru Urbassik creates the schedule and arranges the classrooms before each term. In her spare time, she also drives a school bus named the Admiral Mann.

No, she doesn’t go around picking up elementary school kids and dropping them off at school. She just recently bought a school bus with her husband, Johnathan Eberhard, and is in the process of converting it into an RV.

The Clackamas Print: You just bought a school bus. What are your plans with this?

Dru Urbassik: Right now, my husband and I do a lot of camping and we’ve been tent camping for years—sometimes cross-country—and we’ve been looking into getting an RV or maybe converting something. And we found this school bus! We’re slowly converting it into a camper. It’s a 35-foot, 1997 Thomas Saf-T-Liner school bus. It was part of Beaverton. It was bought at auction, and we bought it from someone privately.

TCP: What are some of the renovations you have planned?

Urbassik: We have taken out all but three rows of seats on either side. We’ve gutted the whole back of it and on the right-hand side in the front, we’re actually utilizing the school bus seats, and we’re making a dinette table. We’ll have a bedroom, a kitchen area, a lounge area and then a garage area in the back.

TCP: Where do you plan to go?

Urbassik: We are actually going to be in the Ochoco National Forest. We usually camp on the east side of the Cascades. We may take it other places, but it’s a really big, heavy vehicle; so until we get a few miles under our belts and used to driving it, we’re probably not going to take it further than just around Oregon for now.

TCP: What inspired you to do this, especially with a school bus?

Urbassik: Truthfully, it was kind of an impulse buy. We’ve been looking at RVs and other vehicles, [like] trailers, for years now. We have renovated a house before, and we combined that experience and that dream and decided that we would renovate the bus. We found the right one at the right time. I like the idea that we can customize it and do what we want with it. We were looking at renting an RV, and for about that same price we can just buy the bus and renovate it. It’ll be a two to three-year project for us. I would have been fine with the shell of any other vehicle, but we just found the bus and were like, “That’s the one!”

TCP: Do you have any advice for future adventurers or future RVers?

Urbassik: If you’re thinking about purchasing a vehicle like this, you need to think of a couple different things before you can even get started. A lot of people have issues with where to store them, so they purchase this vehicle, they’re really excited, but then they have no place they can work on it or store it. You have to make sure you have the right licenses depending on how it’s going to be registered. It can get a little pricey, and it can get a little challenging at times. It’s a very time-consuming process, but it’s fun. I know there will be a few times where we’ll get frustrated. Maybe the flooring won’t go in right or we won’t be able to fix something, but that’s all part of doing a renovation. If someone has the drive to do this and they want to go on an adventure, this is a fun one to do! 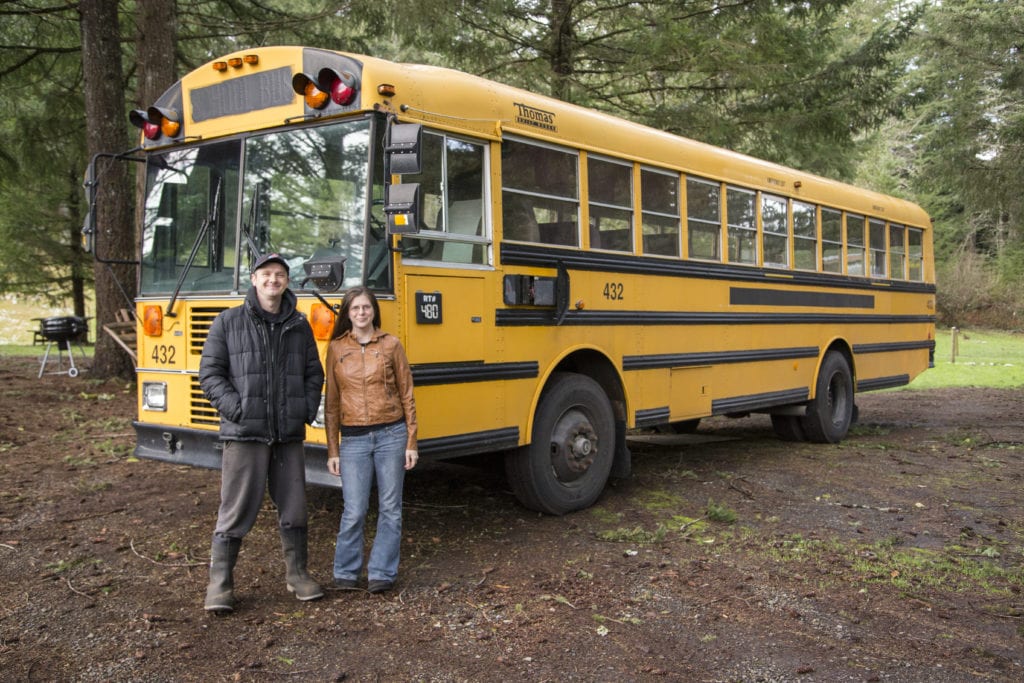 Urbassik and her husband Johnathan Eberhard in front of their school bus, proudly named the Admiral Mann.