Are you ‘complicit with evil?’ 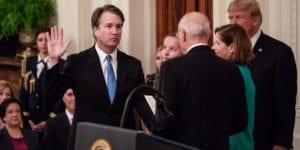 Fake News. Nazis. Fascists. Are you complicit with evil?

Though extreme political rhetoric has existed since the earliest days of our country, it’s hard to deny that we live in an extremely polarized climate today. The last decade has seen a shift towards extreme tribalism, with citizens and voters being pulled to one side of the aisle or the other by the party they belong to. Today, you’re either a Republican or a Democrat. You either support President Donald Trump or you’re part of the resistance. There’s very little room for nuance.

A part of this shift has been the ramping up of speech used on both sides. Many would place the blame for this on the President, who undeniably uses speech that would have previously been considered unbefitting of the office of the president. President Trump constantly derides specific media organizations, such as CNN, for being “fake news.”

Supporters of the president elected him for this same rhetoric, exhausted by the shift of those on the left towards ideas like political correctness.

Who’s really to blame? Is it President Trump? The “Fake News” media? Liberal or conservative politicians? All of the above.

It’s impossible to pinpoint exactly when this process began, when political rhetoric began to ramp up the way it has, but it has certainly accelerated during the President’s term. Recent events have made that quite clear.

Just this week, two incidents have been widely reported by various news organizations. The most recent, the shooting at the Tree of Life Congregation Synagogue in Pittsburgh Saturday, took the lives of eleven victims. Six others were injured, including four responding officers. The suspect in the shooting, who was taken into custody after a gunfight with police, is believed to have shouted anti-Semitic comments while initiating the attack.

The second, taking place last week, involved a man sending pipe bombs to various liberal figures, including Hillary Clinton and former President Barack Obama. None of the devices exploded, but the intention was clear.

It didn’t take long for the President’s rhetoric to be blamed for both attacks.

“You can draw a direct line from all of the vitriol and hate rhetoric about the caravan that’s some 2,000 miles away from our border and the gunman in Pittsburgh, who referenced that, and somehow turned it into an attack on Jews,” said CNN host Alisyn Camerota on Monday, referring, in part, to the President’s own words about the migrant caravan currently making its way through Mexico.

Likewise, in the aftermath of the pipe bomb incident, CNN political analyst John Avlon took the time to list how many times the President had criticized the targets of the pipe bombs, implying that his rhetoric was the reason for the failed bombings.

It isn’t, however, reasonable to blame the President for every attack that has taken place over the last few years. Only a few weeks earlier, after all, a Utah resident mailed suspicious envelopes to the President as well as other military leaders, some of which contained ingredients used in the creation of the poison ricin.

2017 saw the shooting of House Majority Whip Steve Scalise, a Republican House Representative from Louisiana while he played baseball with a number of other members of Congress. Scalise was critically injured in the shooting, as was Matt Mika, a Tyson Foods lobbyist, who was shot multiple times.

Neither of these attacks were likely prompted by the President’s criticism as the victims were Republicans and political allies of the President. The President is also far from the only person using hostile language. One only needs to look as far as the recent Supreme Court nomination to find those on the other side of the aisle using similar language.

Booker’s implication here, of course, was that supporting the nomination of Brett Kavanaugh to the Supreme Court was supporting evil. The fact that this comment was made almost two months before the sexual assault allegations were made against Kavanaugh make it even more startling.

Booker is far from the only left-leaning individual to use extreme language, however. Even before the President was inaugurated, some on the left were referring to him as a Nazi, comparing him to Hitler in the most absurd ways. Several Democratic politicians, including Texas U.S. Senate candidate Beto O’Rourke, have gone so far as to call for his impeachment.

Just this last week, amidst the Tree of Life shooting and the pipe bomb crisis, the New York Times believed it to be appropriate to publish five short stories, written at the publication’s request, depicting what the author’s believed would happen after the conclusion of the Robert Mueller investigation into the Russian meddling in the 2016 election. One of these stories illustrated an attempted assassination of the President, ending with a Secret Service agent handing the assassin his weapon to finish the job.

These are a few examples, but far from the only ones. None of this rhetoric is helpful. Whether it comes from the President or CNN, this kind of language does nothing but enflame the situation further. It moves us farther into our corners, into our tribes, and makes it that much more difficult to come together.

Instead of pushing each other away, we should embrace our differences. Understand that you might disagree with someone on some things. One of the greatest losses we have suffered is the ability to have a conversation about the topics that matter.

“You cannot be civil with a political party that wants to destroy what you stand for, what you care about,” said former Secretary of State Hilary Clinton in an interview with CNN recently. “That’s why I believe, if we are fortunate enough to win back the House and or the Senate, that’s when civility can start again.”

This attitude is wrong. Without civility, you cannot conversate. Without conversation, especially with those that believe something different than you, you cannot grow, you cannot spread new and different ideas. Instead, you will simply be stranded in your little box of ideas, unable to develop and evolve.

Until we can have a conversation again, we are doomed to continue this fall into distrust and violence.

It’s time to grow up.