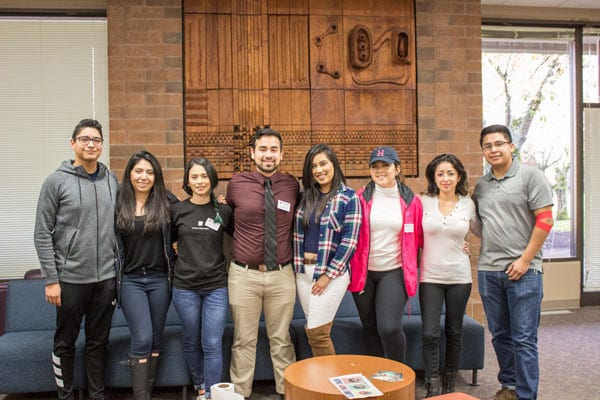 The eight Latino members of CCC’s student government make up nearly half of the leadership team.

Some people work, others are students and only a few are leaders. The Associated Student Government is the representation and voice for students attending Clackamas Community College.
They provide many benefits and opportunities for students. Some of it includes the lending library, book exchange, lost and found, calculator rentals and grants. This year, ASG created a new department called the Community Wellness Department, which includes the free food market, the Cougar Cave and other programs.
Currently, there are 17 student leaders in ASG. This is the first time at Clackamas that both the president and vice president are Hispanic. Jairo Rodriguez is the president of ASG and Alexa Carrera is the vice president.
“What they contribute to ASG can be contributed by anyone, no matter the race or ethnicity,” said Kevin Villanueva, an ASG student that works in the Grants Department. “I feel like everything they do, they do it with a purpose and they do it because it’s necessary. They are setting a great example for other Latinos in the community—that you don’t have to be white, like I said it doesn’t matter what race or ethnicity you are, you are capable of holding high positions in a department like ASG.”
There are currently eight Hispanic ASG students. According to Carrera, throughout her time at ASG she has seen the number of Hispanics grow in student leadership.
“I never really thought about it until recently,” said Carrera. “It’s amazing. I feel really proud to be a representation of my culture. You don’t really see a lot of Hispanics stepping up to leadership positions and the fact that the V.P. and the president of ASG here on campus are both Hispanic is great.”
Everyone works hard and as a team. Even though ASG students work in their own departments and have their own responsibilities, they lend each other a hand.
“Under our constitution, my job is unrestricted as far as what I can do inside ASG,” said Rodriguez. “My V.P. is also an elected official, and they have responsibilities that fall under different things. Essentially, I am the voice and she is the backbone.”
Any student going to CCC has the opportunity to apply to be a part of ASG. But there are some requirements for becoming a student leader, including a minimum GPA of 2.75, two references and a resume. The application to apply is online.
There are three different positions available: ASG Officer, ASG Senator and ASG Senator at Large. The mandatory work per week ranges from four to 15 hours depending on the position.
Many of the current ASG members joined student leadership not just to benefit themselves but to help other students. They have the opportunity to set up different events around campus.
“I like the connections that it brings,” said Villanueva. “I used to eat lunch alone and once I came here, it’s like I have new friends. And it’s kind of like a second family for me now, where if these people become lawyers, if they become doctors, I can be proud to say that I know a lawyer and a doctor, personally.”
It’s a constant learning experience. Students enjoy the positions they are in because everyone gets something out of it; whether it’s leadership skills, learning time management or just making new friends.
“The fact that I have so much to offer to the team and the team has so much to offer back, it really is motivational,” said Rodriguez. “The whole atmosphere of having people there with you throughout this journey is really what keeps me going.”
Even with the amount of time that they spend per week working in ASG, as well as trying to balance their classes and jobs, these students are involved in leadership for the benefit of the long run.