This spring, Brett Bafaro is trading in 54,000 spectators and the lights of Autzen stadium for a small college baseball program and reuniting with his brother.

After three seasons and an NCAA National Championship appearance with the University of Oregon football team, Bafaro finds himself relaxed and comfortable back on the diamond.

While finishing his senior year at Liberty High School in 2012, Bafaro was a four-star recruit and the lone linebacker in Chip Kelly’s final recruiting class at the UO.

Five years since his last high school baseball game, Bafaro is returning to the sport he gave up when he made his choice to attend UO.

Bafaro left the football program while still attending classes at Oregon and eventually left UO all together.

I got into a repetitive lifestyle at the U of O after I got done playing football there, I was still on scholarship and still going to school. I just about got my degree while I was there but it was normalcy that I couldn’t deal with,” said Bafaro. “I don’t want to grow up and get a job yet. I want to keep the dream going as long as I can.”

While playing football for the Ducks, Bafaro realized that it was not as expected and things had not been clicking well enough to continue his football career.

“I think what happened is that when I got there I realized ‘I can do this if I really wanted to, but something didn’t feel right.’ There was something inside of that wasn’t right,” said Bafaro.

Oregon gave Bafaro a $100,000 scholarship along with room and board to play football at the college. Bafaro knew that something was not right after a few seasons and began to question if he should have chosen baseball instead.

“I didn’t feel like I was meant to be there, and that’s a really terrible feeling especially when a school put all their eggs in one basket, when they gave you a hundred and some odd thousand dollar scholarship plus room and board,” said Bafaro. “They invest a lot into you and then you get there and go, ‘Eh I don’t know if I like this. I don’t know if I should have played baseball.’ That’s just a weird feeling.”

That is where Clackamas Community College came into play.

Brett’s younger brother, Brayden Bafaro, who graduated from Liberty in 2016, had a similar decision to make: football or baseball. Brayden had the opportunity to play football at Portland State University, but in the end decided to join the baseball team at Clackamas Community College.

“I came on a couple visits, talked to [Jim] Hoppel, loved him as a coach and then I decided baseball was my choice. I just thought it was the right decision, the right fit and place for me to be at with all the guys that I know,” said Brayden. “Coach Hop [Hoppel] was basically my main choice, love him as a person, he made baseball fun for me.”

Both Brett and Brayden weighed on each other’s choice to come to CCC.

“He definitely had a little bit of weigh on it, big brother, always talking in my ear,” said Brayden. “He put a different mindset in my head, it helped me make my decision. It’s good to get back together with him, bond and work hard together. It’s fun being back with him.”

I let him know a little bit about my experiences and I think he took that, looked at himself and said, ‘Hey we can both do this thing in baseball. Football, our ceiling might be here, but in baseball, our ceiling might be up here,” said Brett. “As soon as [Brayden] decided to come here instead of go play football at Portland State, I knew right away.”

“No matter what DI sport you play it’s always a mindset that you carry with you and you have got to make sure you prepare the hardest, work the hardest so that when you’re in that game time situation you’re not nervous. You’re ready to go,” said Brett.

Chip Kelly is not only known for explosive offenses at the UO, but also his speeches and sayings, one in particular has stuck with Brett.

One thing I’ve carried with me from the Chip Kelly era at the U of O is, you can’t be nervous. You can’t be this and that, because you’ve prepared so damn hard. There is no way you won’t be ready,” said Brett. “You’ve got to be a dog licking your chops and getting out the gate because you’ve been working so hard. It doesn’t matter what level of player you are, you have to take the same mentality.”

Brett’s transition back to baseball has been relatively seamless in the eyes of assistant coach Jackson Gillett who was the head coach at Liberty high school and had the opportunity to coach both Brett and his younger brother Brayden.

“It’s pretty crazy to think someone could come back from a few years off [from baseball] and be this good, but if anyone could do it, it’s Brett,” said Gillett. “His swing looks as good as ever. He hit over .350 in a summer collegiate league, which is hard enough, let alone after not having played for four years. In his first real college game a couple weeks ago, he went 3 for 4 with a HR that hasn’t landed yet.”

Brett’s mentality on the diamond has changed, but not in an aggressive fashion as one would think after being in a highly competitive or even cutthroat environment at the UO on the football field.

“I think the difference is that he isn’t worried about making the choice between football and baseball, choosing which school to go to. Now he seems relaxed, like he’s just having fun playing the game,” said Gillett. “He commented to me that he didn’t realize how much he loved baseball until he left it.”

After playing at the championship level of college athletics, Brett now knows what to expect in the future as he continues his baseball career.

“It made me realize this is the world of athletics, not everybody there has got your back, you really have to watch out for yourself,” said Brett. “I don’t think I was ready for the day in and day out mental grind. It’s not only physical, it’s a mental grind, and that’s one thing I forgot about once I got there.”

Out of high-school, Brett was eligible to enter the MLB draft and was projected to be picked as high as the tenth round. He had teams like Arizona and Tampa Bay ready to put him in their farm league systems. Now that he is back to baseball the draft is once again his ultimate goal.

The reason I play is because one day I want to get to the highest level and compete at the highest level,” said Brett. “I dream of waking up every day and going out there and competing against the best guys because I think of myself as one of the best ball players, so I wake up every morning with that thought on my mind. This is definitely a stepping stone to that opportunity.”

Happy to be back to baseball, the 6’2, 220-pound center fielder will help Clackamas on the diamond while pursuing his own dreams and aspirations in the sport. As grey skies and wet days turn to warm sunshine, Bafaro will welcome in spring, knowing that his first season as a collegiate baseball player is upon him. 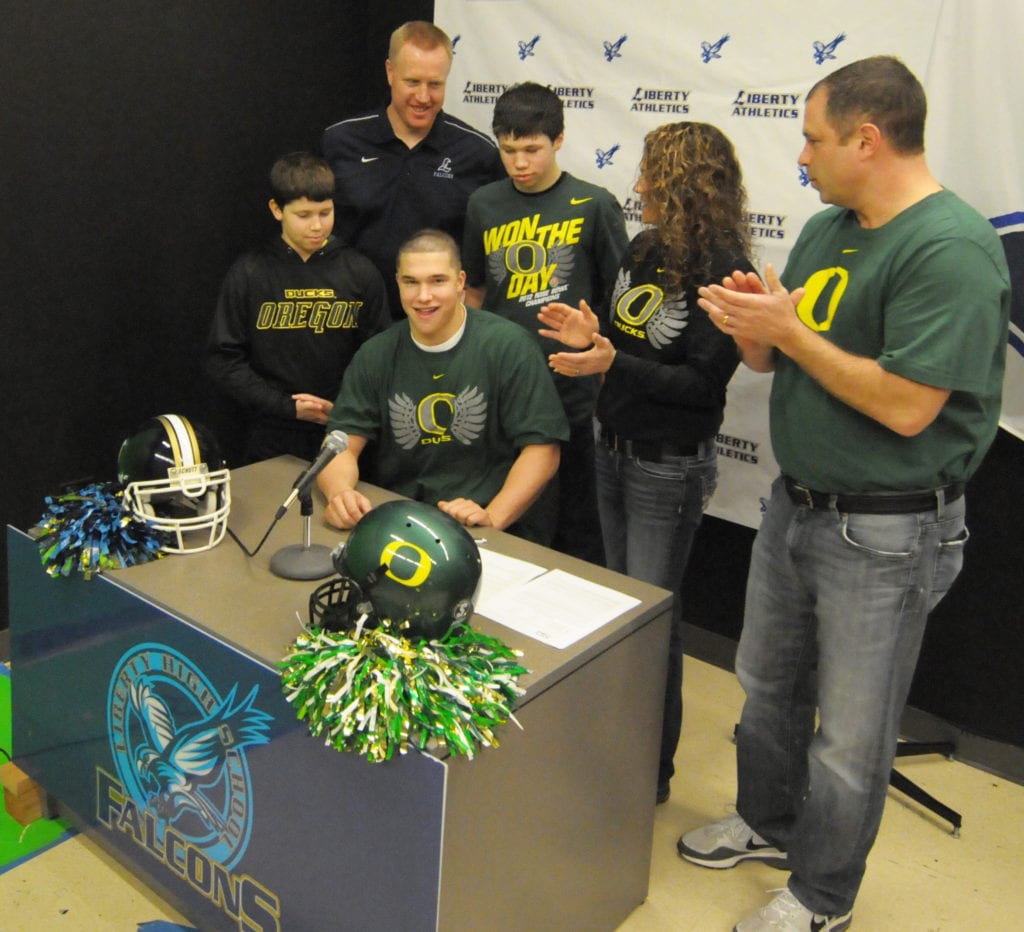 Brett Bafaro is with his family as he signs his letter of intent with UO at Liberty High School.