Candidates line up their priorities

With the presidential election coming up later this year, it’s about time to talk about the candidates.

In the Republican Party, there is Donald Trump, Ted Cruz and John Kasich.

The Democrats include Hillary Clinton and Bernie Sanders. Jill Stein is of the Green Party and Gary Johnson is of the Libertarian Party.

Rex Howe, a student taking a political ideologies class, said that Republicans want to promote limited government and liberty, while the Democrats want the government more involved in decision making.

To be able to vote for a president, you need to know what you find important in a leader. Some students were asked what they find essential in a good president.

Howe said, “Politics is the art of compromise; you never get what you want. It’s the lesser of two evils.”

Brittni Isom mentioned that trustworthiness and equal rights for every citizen was important to her.

The president of the Associated Student Government, Brent Finkbeiner, said, “I think the biggest problem in government right now is corruption, I mean, our leaders are bought and sold. I want to know that there’s somebody that’s going to look out for the population without being bought.”

He said selflessness is crucial in a presidential leader.

Surprisingly, none of these students mentioned anything about college. Here is what the candidates plan to do to help college students.

Sanders wants to make colleges and universities tuition free and wants to stop the government from making money off of student loans. He plans to do this by taxing Wall Street speculators.

Clinton wants to make college more affordable with the New College Compact. This will work to help students not have to borrow money for college fees, refinance school debt at current rates and allow the colleges themselves to be in charge of making school affordable for students.

Trump believes that the federal government should reduce loan rates and not be allowed to make money off of student loans.

Cruz has not officially announced any plans for the higher education but plans to get rid of the Department of Education.

Kasich’s plan to make college affordable involves helping high school students earn more college credits in high school to lessen the time in higher education. Payment to colleges will be based on helping students pass courses and graduate rather than on attendance.

Stein wants to expunge student debt and secure free tuition through all stages of education.

Johnson has not mentioned any plans with higher education but does want to get rid of the Department of Education as well. He believes the federal government has no role in education. To see what other issues the candidates are for and against, please see the table below.

The deadline to vote in the Oregon primaries is May 17. 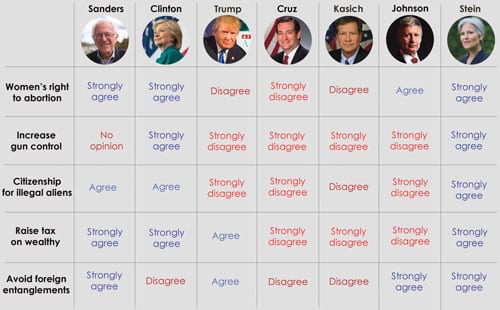