CCC all in on new director

After six months of searching, one failed search and four final candidates, Bobby Smith has been hired as the new Director of Campus Safety.

The process to hire Smith was “extensive,” Bob Cochran, Director of Campus Services, explained. After the failed search for a qualified candidate in November, Clackamas Community College turned to The Prothman Company, a recruiting firm that sent out roughly 500 letters on CCC’s behalf up and down the West Coast. After those 500 letters turned into 12 candidates, The Prothman Company came back to CCC, which then again narrowed it down to four final potential directors. It was at this point Bobby Smith first came to the CCC campus.

“After doing research, thank goodness for the Internet, we discovered CCC had an opening for the Director of Campus Safety. It seemed like all of the pieces fit,” Smith said in an email. “We toured Oregon City and CCC and fell in love. Everyone is friendly and helpful so we knew we were right where we wanted to be.”

After two days of interviews, forums and tours, “the people who were involved with it got together and just kind of talked about the concerns and the benefits of each employee,” said Cochran. “We went home for the weekend and processed it and that’s when we selected Bobby Smith.”

So what can CCC expect from this new hire? As it turns out, this is an exciting time for our campus’ safety.

“[Smith] has a really good energy that we think is going to work well here. He has a good sense of humor, he’s serious about his work, he brings a wealth of experience,” Cochran said.

“I’ve had the great fortune of serving our nation and retired as a Command Chief Master Sergeant in the United States Air Force Reserves,” Smith said in an email. “My law enforcement career began just shy of 26 years ago as a Campus Police Officer in Colorado.”

It was soon after his work in Colorado that Smith wanted to enter the world of policing a large, metropolitan city. He eventually found his place doing that in Las Vegas.

Policing Las Vegas Blvd. is undoubtedly a huge task, as the streets are overcrowded with people apt to crime. However, Smith wanted to help the Las Vegas Police Department implement less policing and more what Cochran termed as “community policing.” What aided this was Smith’s community-based ideology in work and life.

“They just didn’t arrest everyone who went sideways with the law, they addressed each case individually and made the best decision based on that individual,” Cochran said. “We thought that would work real well with the college.”

For Smith, the transition from Las Vegas to CCC will be a chance to continue his work within a new community.

“I’ve been fortunate to serve the Las Vegas community for almost 20 years and recently retired as a police lieutenant. The next chapter in my career is to continue my community service, but I wanted it to be in an environment where the focus is upon education, prevention and redirection,” Smith said in an email. “There is no place better than CCC to do exactly that!”

Once on campus, Smith will have a variety of jobs to keep him busy. These include overseeing the campus safety officers, making sure the campus complies with the Oregon OSHA requirements and working with the Emergency Management Program to prepare plans for emergency scenarios.

“He will be also working with our BIT team (Behavioral Intervention Team),” Cochran said. “And that’s the team that looks at students of concern, people who we wanna make sure are successful here and make sure they do everything they can to make this student successful.”

Most of all, Smith will be here to be a part of the students’ community and life on campus.

“It is important our students, faculty and staff know I am here for them,” Smith said in an email. “Please share your thoughts and concerns with me so I can lend a helping hand. I’m a good listener!”

For Smith and his family, the transition from state to state and from job to job doesn’t come without some fears.

“Although I’ve been deployed worldwide, this will be our new home,” Smith said in an email. “Relocating and joining a new team can be scary. I also want to do well and not let our community down.”

Overall, Smith has shown nothing but enthusiasm for his new job on our campus, as well as enthusiasm to be a part of the cougar community.

“While going through the selection process, I was impressed with the strong sense of togetherness and teamwork the faculty and staff displayed,” Smith said in an email. “They treated me like a friend and it became obvious they weren’t only searching for a director, but also for a teammate. I knew CCC was the place for me.” 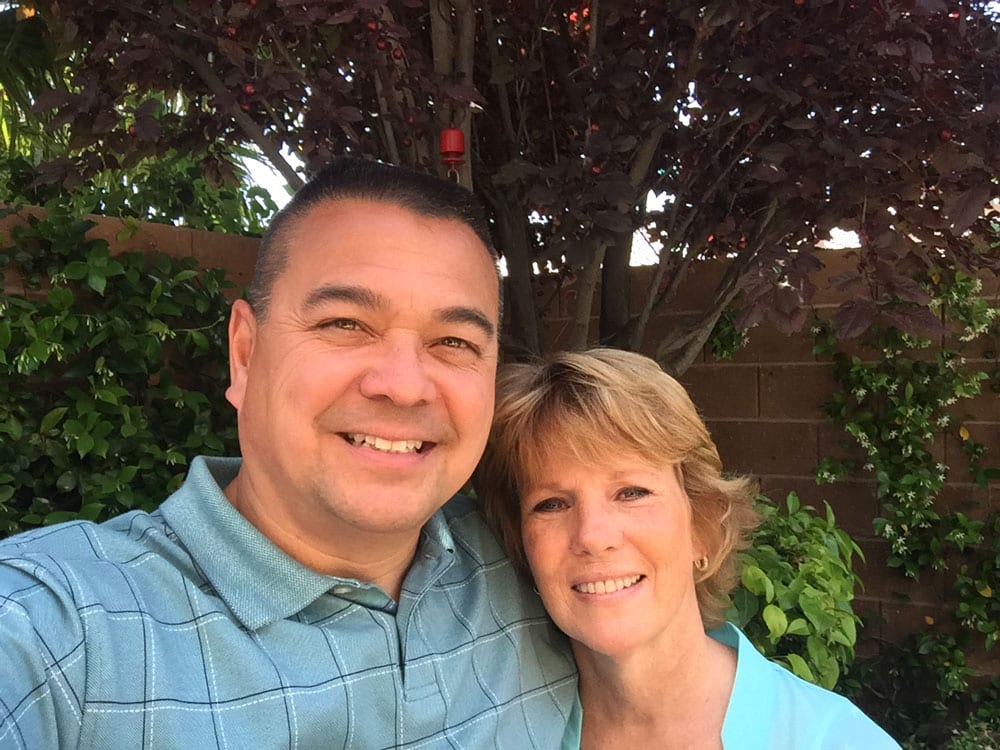 Bobby Smith, the new Director of Campus Safety, poses with his wife CJ. After 20 years living in the Las Vegas desert, they are both excited to move to Oregon and enjoy the greenery of the Northwest.