When they announced the annual Retiree Party was to meet in the Gregory Forum on May 5, not everyone expected such a large and tear jerking occasion.

Fused with the strong smell of cake and coffee, many people gathered around white linen tables to watch the slideshow presentation of each person retiring from Clackamas Community College.

A combined total of 193 years of work were put into Clackamas College among the 12 retirees at the formal gathering. That’s more years than the college doors have been open.

With so many beloved members of the staff retiring, Theater Instructor Chris Whitten, emcee, told numerous jokes that took advantage of the old logo also leaving the college.

Dave Arter, a science instructor, when summoned on stage to give his short speech, threw a stack of papers into the air after promptly stating he was sad to leave but he was glad for, “No more grading.”

The paper wafted around his jubilant face like a burst of confetti, followed by laughter and applause from the crowd.

Lynda Ellingsen, who worked at CCC for a whopping 31 years, retold some of her childhood memories when her family owned a cafe with a strip club in the back. As she recounted, she was never allowed in the back, but she would often help sew the costumes for the strippers. She was also lucky enough to accidentally meet Bruce Lee once.

Michelle Meyer, who has been at Clackamas for 24 years, was often teased for finding her husband here after only three weeks.

Becky Ogden was often a favorite co-worker. She frequently had weird snacks that she passed around to the other staff members and was the, “only woman who had the ability to make teenage boys cry,” said the lady who gave the tribute speech for Ogden. According to one memorable account, Ogden would stop by her office to see her still hard at work and say, “Jane, you ignorant slut, go home.”

Even with the amiable theme of “Bon Voyage” with suitcases, postcards on the tables and flags from foreign countries stuck on the cake slices, there was a bittersweet atmosphere in the room. This is one generation leaving to pass on their duties to a fresher generation. They’ve put their life’s work into this school and it has had a worthwhile impact upon us students. But as the retirees regularly told everyone on the mic time and time again, it wasn’t just the students’ lives that were being changed for the better, but the staff’s as well. 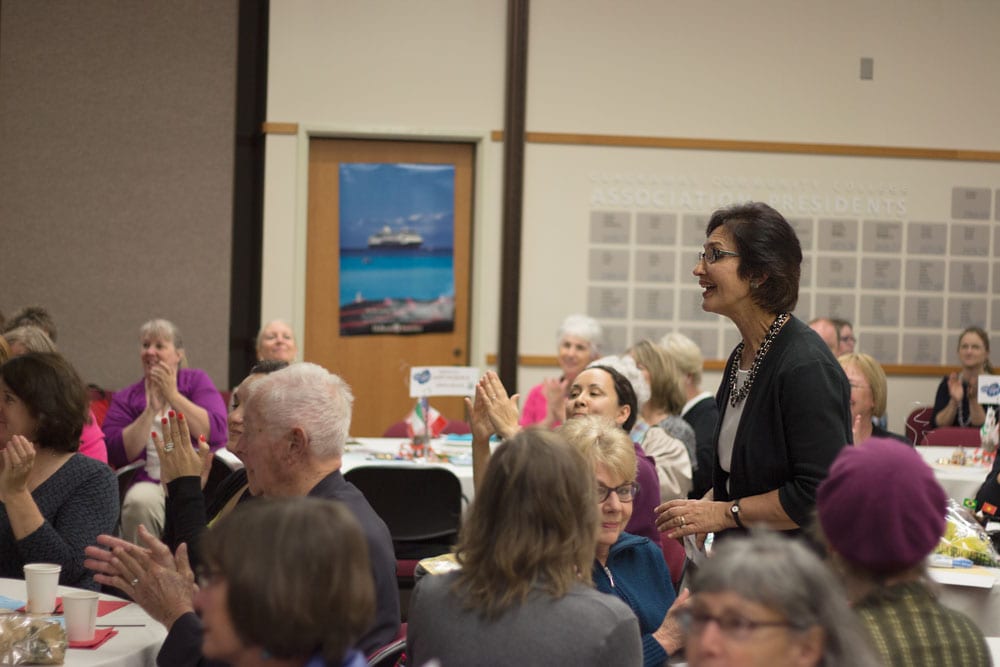 Lenda Black, publications coordinator, walks to the front of the room for her goodbye retirement speech.