CCC Board of Education to vote on tuition increase 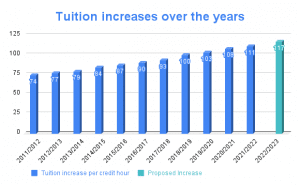 Clackamas Community College is considering raising tuition by $5 or $6 for the next academic year.

“I think we’ve kicked the can down the road for a few years now on tuition increases,” said Rob Wheeler, who represents Zone 2, Happy Valley, on CCC’s Board of Education, “We’ve been bailed out by the COVID dollars that we got this last year that helped considerably and I don’t think we can count on that going forward.”

The increase is another in a long line of tuition increases; 10 years ago during the 2011-2012 school year, one credit cost $74. Tuition has increased 50% in the past decade.

In recent years, CCC has raised tuition by a couple of dollars per credit each year, to accommodate for inflation and rising costs of operating the college. Despite this, CCC’s tuition remains the third lowest in the state of Oregon, and the lowest in the Portland metro area, according to college administrators.

This year the proposed increase is slightly larger than it’s been in recent years, given that the college has been short on revenue due to lower enrollment during the pandemic.

Tuition makes up about a third of the college’s revenue and enrollment is down around 25% since fall of 2019, according to Jeff Shaffer, Dean of Business Services.

“We are currently projecting a nearly balanced budget for 2022-23, but then a deficit of $1.2 million for 2023-24. However, increased enrollment, a modest tuition increase, and increased funding from the state (which is an unknown until late spring 2023), may help fill the gap,” said Cook.

If the college doesn’t get more revenue, administrators have to find ways to cut costs, which could include things like removing some student services.

“What we have going on, and what we’ve had for several years, is what we call a structural operating deficit, which means that we’re spending more than we’re bringing in,” said Alissa Mahar, Vice President of College Services, at an Associated Student Government General meeting on Feb. 9. “We’re kind of just barely making it through and we don’t want to cut services to students, we don’t want to cut programs, that’s just the most painful thing to go through in an organization, but we are investigating everything we can to balance this forecast, both on the expense side and the revenue side.”