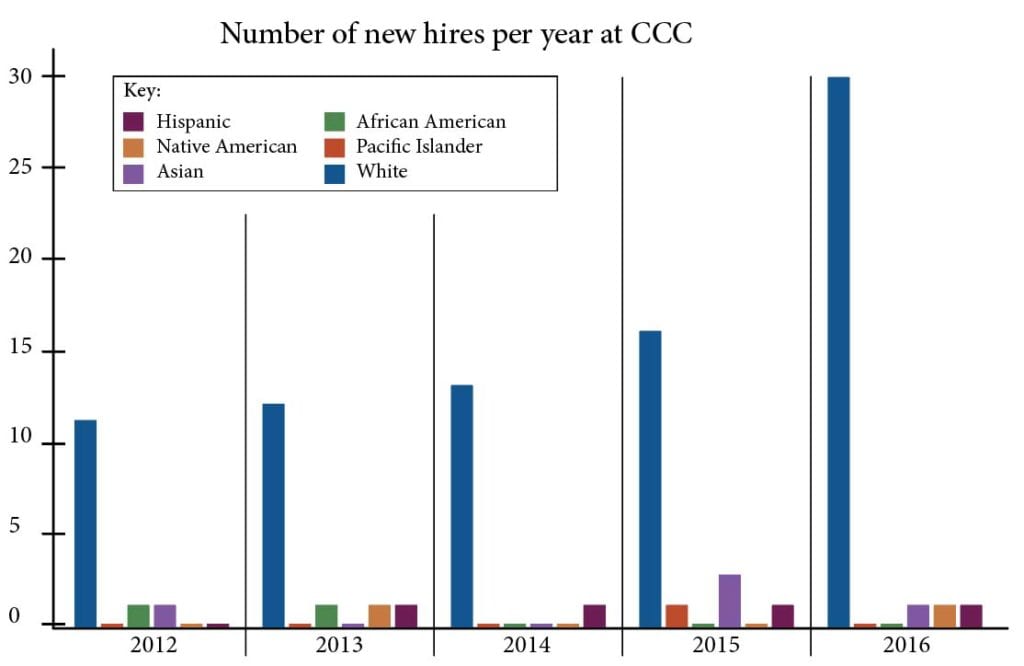 Diversity and representation have always been hotly debated issues in America especially in recent months. The effort to be more inclusive and undo the prejudice and bias of the past has been a central focus in education and work over the last few years. However, while the diversity of the student body has been expanding recently, it can seem as though the diversity of staff has been lagging behind.

The most recent records on employees at Clackamas Community College show that of the 1,013 full-time staff members 878 of them are white. No other ethnicity currently even reaches the triple digits among employees, with the second highest being Hispanic/Latino members at 68.

Hiring of new full-time employees also follows this trend with 82 hires from 2012 to 2016 being white; and only four being Hispanic/Latino and two being black/African American.

This trend may seem shocking but there are variables to consider about the numbers, the first of which is that this data only accounts for full-time staff and does not include part-time or any other type of employee.

It’s also important to consider that most hires are picked from resumes sent in by the applicants. The college advertises to areas based on what position they want filled and then assembles a group to interview and choose from the candidates. But the pool the college can hire from will depend on who applies for a job most of the time.

The other biggest factor to consider is the diversity of Oregon itself. Census data taken from 2016 show that Oregon’s population is approximately 87.4 percent white, with 12.8 percent being Hispanic or Latino and about 2.1 percent being black or African American.

Keeping these variables in mind when considering staff composition is important, but it’s also necessary to ask what actions are being taken to help encourage diversity regardless. Especially when those differences in race can help better represent the student body.

When asked their opinions on the data, students shared the sentiment that it was surprising. One student, Justin McDaniels, felt that more could be done for students.

“Especially in the wake of the political climate and statistics coming out about hate crimes, I think it’s really important to have the situations be intentional and really [be] consistent about making these kinds of spaces for
people who are minorities,” he said.

Other students like Steven Laired share the hope that people selected for positions were chosen for their qualifications; and anyone reviewed wasn’t discriminated upon by their background or race.

On the other side of the argument students like Jessica Erickson didn’t feel that all the blame rested with the school for hiring. She felt that many people of different races may not apply due to existing racial pressure.

“I can’t blame employers for not being diverse when people have this stigma about themselves, so that’s where I think the problem with diversity is,” she said.

No matter how much people felt the school needed to do, however, most agreed that CCC did try its best to encourage diversity in its community. Actions like the welcoming signs in the library, the eager smiles and helpful attitudes of students and staff who work in the school and help no matter what your background is; and even events like the annual International Week are all things the college does to put a foot toward inclusiveness.

There has even been a new diversity task force made at CCC to help inform future decisions and staff like Dean of Human Resources Patricia Anderson Wieck are committed to the ideals of welcoming all people and not discriminating on campus.

The college has struggled lately with hate crimes on campus and other issues involving race over the last few months, but they do struggle against the rest of the country’s political and social struggle when they try to make change.

So even when CCC puts in effort to be more diverse, the process to do so does take time and progress won’t occur overnight. But it’s always important to look at what is being done and not just what is being said.

In that regards it’s yet to be seen if enough is being done to help change the imbalance in staff and opportunities here on campus, or if CCC is standing still instead of moving forward.