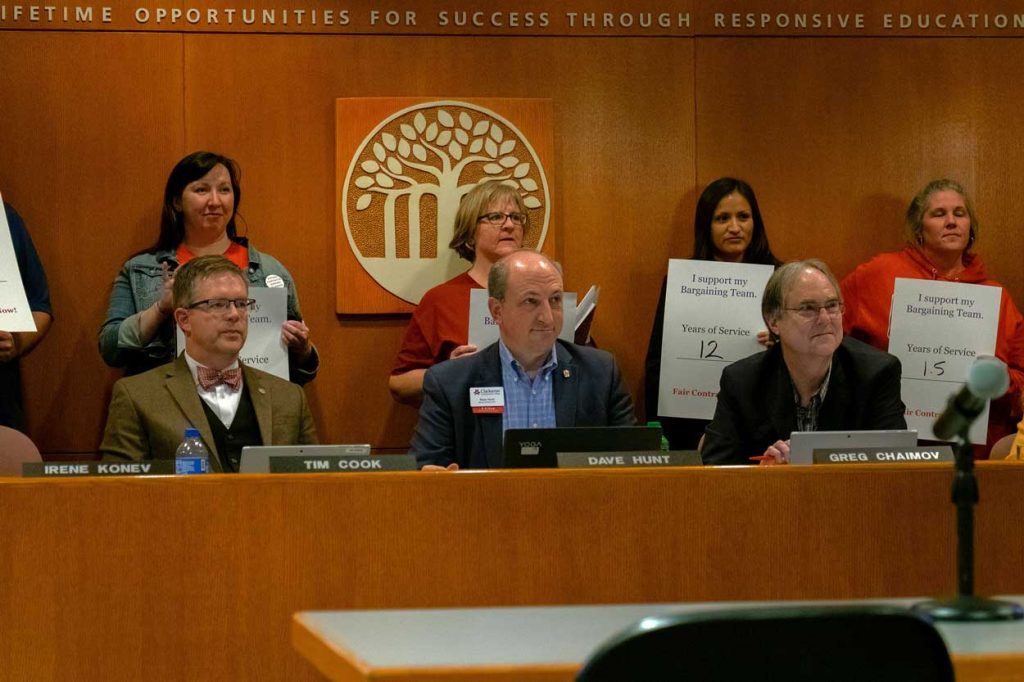 Clackamas Community College Board member Dave Hunt is on leave from his position as a board member after being cited by the Portland Police Bureau’s Human Trafficking Unit undercover operation in April.

According to the police bureau’s press release, officers posted decoy ads online and Hunt, along with the others cited, responded to arrange payment for sexual acts.

“We are shocked by this allegation and will take appropriate actions that best serve the interest of our students and our community,” CCC President Tim Cook and CCC Board of Education Chair Greg Chaimov wrote in an email sent to staff and students on May 3. “Effective immediately, Dave Hunt is taking a leave of absence from the board.”

CCC is governed by a seven-member Board of Education. Members, elected to four-year terms, represent each of the seven zones in the CCC College Service District. The board sets policy for the college, oversees the development of programs and services, the adoption of policies and budget, to meet the needs of the college district.

Hunt, 53, has been an elected board member for CCC since January 2015 and represents zone 3 – Gladstone, which serves Gladstone, Oak Grove, and Jennings Lodge areas.

Hunt is running unopposed for another four-year term in the May 18 special election.  He took the leave of absence from the board after his arrest was made public, according to the college’s website. Ballots have already been mailed, but since news of Hunt’s interaction with police, David W. Kays has announced he is running as a write-in candidate against Hunt.

In an email to the Clackamas Print, Dave Hunt’s attorney Michael P. De Muniz wrote, “There seems to be confusion about whether this charge involved a minor. This charge does not involve an allegation relating to a minor. The state prosecutes defendants alleged to be involved with a minor using more serious laws, such as ORS 167.057 (Luring a minor) and ORS 163.433 (Online sexual corruption of a child in the first degree). The allegation here is that Mr. Hunt offered or agreed to pay a fee to engage in sexual contact with an adult.”

De Muniz wrote that Hunt’s arraignment is scheduled for May 27 at 8:30 a.m. at the Multnomah County Courthouse. At the arraignment, the judge provides a copy of the charging document and sets another court date several weeks out. At the second court hearing, a defendant is expected to either resolve the case with a guilty plea or schedule the case for a trial.

According to an email from Tim Cook sent to students on May 7, board members can not be terminated. “Board members are elected officials and there are no existing policies on board member termination. The board may ask for a member to resign, but the member has the right to choose.” If a board member’s seat is vacated at any point in time, the board would begin an appointment process to fill the seat. Below are board policies on removal from office and board member resignation.

In a press release, the Portland Police Bureau said its Human Trafficking Unit planted ads on websites in April to attract people who would pay for sex. Hunt’s involvement was first reported by the Portland Tribune, which matched Hunt’s name, address and age with one of the men cited.  Hunt was born November 10, 1967 in Port Angeles WA. He attended Sheldon High School in Eugene, Oregon and New York City’s Columbia University where he majored in political science and American government.

According to authorities, the men contacted undercover officers who posted decoy ads on known human trafficking websites and tried to arrange payment for sexual acts. All eight were cited on a charge of commercial sexual solicitation. According to the police report obtained by the Portland Tribune, Hunt was cited by two police officers on April 28 at the Ramada hotel in Southeast Portland. The men were cited individually when they arrived at the location agreed upon online.

The Clackamas Print requested the list of the people arrested in the sting on May 1, from the Portland Police Bureau Public Information Officer and received it Monday, May 3. It included “53-year-old David Hunt of Milwaukie.” In addition to Hunt the list identified the 7 other suspects as:

56-year-old Daniel Gallagher of Portland, OR

60-year-old Matthew Zelkind of Portland, OR

The Portland Police Bureau Human Trafficking Unit has embedded Victim Advocates available for resources and services to those who are interested. There are also many community organizations that provide help to those affected by human trafficking.

Commercial Sexual Solicitation is not legally considered a sex crime, so it is expungeable.

Hunt began his career as a congressional staffer and went on to serve five terms in the Oregon Legislature, serving as both speaker and Democratic majority leader. As a staff member he worked for three members of Congress: Louise Slaughter, Brian Baird, and Darlene Hooley.

He has also served as executive director for three nonprofit associations and is currently the executive director of the Pacific Northwest Defense Coalition where he lobbies the Legislature on behalf of a dozen clients including the Northwest Grocery Association, the Oregon Restaurant and Lodging Association and Oregon AFSCME 75, according to state records. Hunt served as a member of the Oregon City School Board from 1999-2003. He was also a board member, as well as the president and vice president for American Baptist Churches from 1990-2005 according to the college’s website.

Hunt chaired the House Transportation and Economic Development Committee as well as the House Rules Committee and served on the House Transportation, Veterans Affairs, Agriculture and Natural Resources, Trade and Economic Development, Head Start, Campaign Finance Reform, and Elections, Ethics and Rules committees. His support and advocacy in animal-related measures saw him labeled as a 2011 “Top Dog” by the Oregon Humane Society according to Wikipedia.

As a legislator, Hunt was one of numerous sponsors of a bill criminalizing sex trafficking in 2007. In 2011, he also voted for HB 2714, that bill created the crime of commercial sexual solicitation, the crime for which he was arrested and cited. That measure created the crime of patronizing a prostitute—since renamed commercial sexual solicitation—punishable by up to one year imprisonment, a $6,250 fine, or both when the person being patronized is an adult.

To be considered sex trafficking (or “trafficking in persons,” as Oregon’s offense is officially known), a commercial sex act must involve either force, fraud, coercion, or someone under 18 years old. Hunt was simply caught by undercover cops who were conducting a prostitution sting.

For more information or questions about the CCC board, contact Denice Bailey, board secretary, at 503-594-3002 or email denice.bailey@clackamas.edu.

The college said they will continue to update the community as they learn more, and decisions are made.