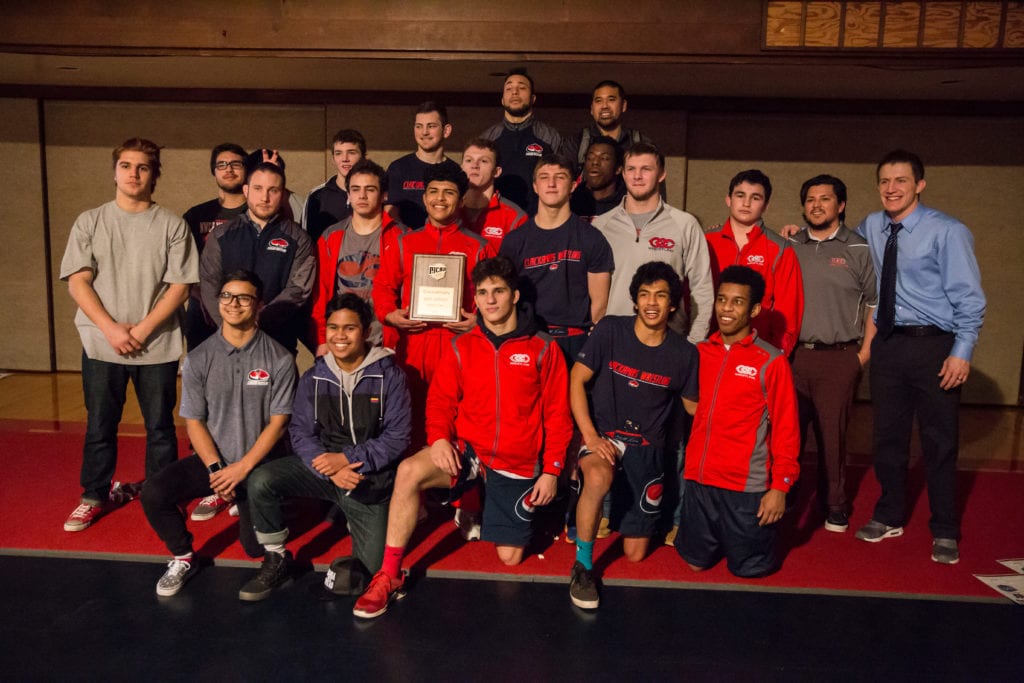 The No. 2 ranked team in the country obtained its fourth straight Western Regional Championship after steamrolling its way through the four-team region.

Clackamas finished with 104.5 team points as well as a total of seven individual champions and one runner up.

“This is a tough region, and to get a total of seven champs out of this region is great,” said Rhoden.

Even though it was only a four-school region, it had some of the best schools in the country.

Four of the first seven matches of the tournament ended by a pin and earned Clackamas some well-earned bonus points early on.

Clackamas advanced eight of 10 total guys into the finals who also earned an automatic berth to the National Junior College Wrestling National Championships on Feb. 24-25.

“With eight guys in the finals, it matches the most we have had,” Rhoden said. “Now these guys get to go out and [have] fun.”

During the finals, 125-pound and No. 2 nationally ranked freshman David Campbell got things started off in good fashion for the Cougars earning a first round fall over Jesus Torres of Highline in 2:20.

Nathan Johnson, 133-pound No. 5  ranked freshman, went out and won in an 11-0 major decision over Beau Shatto of SWOCC

No. 1 ranked Josh Reyes at 149 went out and won a tightly contested 1-0 match over unranked Thomas Stevenson of North Idaho.

Reyes liked the way that he competed as an individual and as a team in the four-team tournament.

“Personally, I wanted this to be a stepping stone heading into Nationals and kind of set a tone for how I feel about myself,” said Reyes. “I definitely have my confidence up.”

Reyes knows what to do to get on top of the podium at Nationals next week.

“Keep the pressure on them,” said Reyes. “People don’t like it when you’re in their face. I gotta go out there and break people and try to score points and just let the rest take care of itself.”

John Leal at ranked No. 3 157 pounds earned an 8-0 major decision over No. 5 ranked Brent Evens of North Idaho.

Colt Doyle, another Oregon State wrestling signee who is currently ranked second in the country at 174 pounds, had the toughest weight in the tournament. Doyle advanced to the finals after pinning Jacob Zocco of Highline. In his finals match, Doyle earned a 20-5 technical-fall over No. 8 nationally ranked Adrian Lyons-Lopez of SWOCC, who had upset No. 7 ranked Alex Aguilar of North Idaho in the semi-final round.

Heading into the season, 184-pounder Haszell ‘Bam Bam’ West was the only returning All-American to start the season for Clackamas. Rhoden mentioned that he felt like West wrestled in a sluggish way even though West was still able to win and make the finals in his first match. West eventually went on to defeat Levi Perry of North Idaho by a 7-2 decision.

West is now a two-time Western Region Champion and will look to become another All-American at Nationals in next week.

Heading into Nationals, West mentioned that he knows what to expect and knows the ropes of what it will take to be on the podium once again.

As a team, West views it as an advantage for his team knowing that he is the only one who has been there and competed.

“It’s kind of to our advantage that they are young and don’t know what to really expect with the National tournament,” said West of his teammates.

Clackamas features a total of seven freshmen of the ten guys who made the trip and competed.

Rhoden noted that his team must stay focused, consistent and really try not to change a lot of things in the room over the next couple of weeks.

“We gotta put our work hats on and go take care of business,” said Reyes.

Clackamas hopes to add another trophy to their case next week where they look to win yet another National team title and keep the magic and story-like season out with a bang.

Freshman Dylan Ulrey at 165 pounds was pinned late in the second round in his finals match.

During the consolation round, freshman 197 pounder Nick Maximov lost a close 5-3 decision in overtime.

According to Rhoden, Maximov was able to still able to qualify for the National tournament as one of the eight wild-cards in the 197-pound division.

Heavyweight Andrew Tausch lost by fall in 37 seconds. Both wrestlers finished the tournament in fourth place.

The tournament will be held at Mid-America Center in Council Bluffs, IA on Feb. 24-25.

*Maximov was still able to qualify as a wild-card.