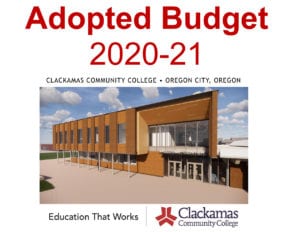 President Tim Cook announced on March 31 that several academic programs are no longer at risk.

Several academic programs at Clackamas Community College are no longer under the threat of elimination, according to a Wednesday, March 31, announcement by Tim Cook, president of the college.

Cook credited federal stimulus, anticipated state funding, current year operational savings, and the dedication of everyone at CCC for the expected closing of the budget gap in the next biennium. Cook stated in an email, “There will be no layoffs, or academic program reductions or eliminations in this year’s budget process.”

College administrators have spent more than a year threatening to cut money-losing programs to save money, including horticulture, theater, welding, nursing and automotive.

Administrators changed course and said the college is estimated to recover around $3.2 million from federal stimulus to account for revenue losses due to COVID-19. The Oregon Ways and Means Committee has also announced its intent to raise state funding for all community colleges from $641 million to $673 million.

Further, the CCC Board of Education approved a $4 per credit hour increase in tuition, which will also serve to close the budget gap.

If state funding is less than expected, Cook’s  Leadership Cabinet has identified $1.4 million in proposed budget cuts. Cook, vice president David Plotkin, vice president Alissa Mahar, and Business Services Dean Jeff Shaffer will be holding an open forum on Thursday, April 1, at noon over Zoom. There they will answer any questions to be had regarding the college budget.