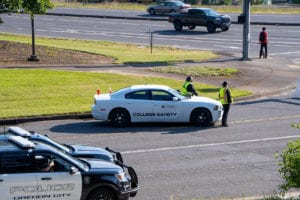 A CCC College Safety vehicle parked near the protest.

When I arrived at the Berry Hill shopping center in Oregon City on Friday, May 21, I felt as though I had entered a Call of Duty game.

In the corner of the parking lot, dozens of men were gathered around a massive American flag. Many were dressed in tactical gear and were armed with firearms, mace, batons, knives, and a myriad of other weapons. These men weren’t with the military or police; rather, they are members of the Proud Boys, a far-right group that focuses on militant demonstrations of their political beliefs.

Clackamas Community College canceled classes and closed campus after receiving information of an “unsanctioned rally/march” planned to take place on the Oregon City campus on Friday, May 21.

“Out of concern for the safety of the college community, CCC will be closing the campus (grounds and buildings) for the day,” the college wrote in an all-staff email.

This wasn’t the first time that protesters chose the college as a meeting place; over Labor Day, 2020, a group of protesters filled the college parking lot without permission from the college.

I was in the area to report on a protest that was going to take place on the Clackamas Community College, Oregon City campus; however, a substantial presence of campus security and police made it impossible to get anywhere near the campus grounds. I noticed people gathering in a shopping center just a few hundred feet down the road and decided to park.

As I approached the gathering demonstrators I could feel dozens of eyes leering at me. Some started to whisper to each other and some would point in my direction. A man standing in the bed of a truck pulled out his cellphone and started taking pictures of me. I decided to stand on a curb a little ways away, just to keep my distance.

It wasn’t long before a man with a Proud Boys shirt approached me. He asked me if I was “Antifa press” and I assured him I wasn’t, although I’m not really sure what that means. He then proceeded to tell me that if I took pictures of anyone’s faces, he would “have his boys make things very uncomfortable” for me. I took very discreet photos from then on. One woman was friendly enough to approach me. She asked, “How can antifa call us racists, terrorists, and white supremacists?”

Over the next two hours, more and more demonstrators arrived at the shopping center, until there were hundreds of people. Many of the demonstrators had brought American flags, so many that you might have thought it was the Fourth of July. The American flag wasn’t the only flag to make an appearance. There were several “thin blue line” flags, “don’t tread on me” flags, and MAGA flags as well. The confederate flag also made an appearance on a few sweatshirts, despite the fact that the confederacy was crushed more than 150 years ago and thousands of miles from Oregon City.

Eventually, reporters for KOIN 6 and Pamplin Media arrived and I finally felt it was safe to wander through the crowd. There were also a few independent journalists navigating the crowd who seemed to go relatively unnoticed.  Aside from dirty looks and comments about fake news, there were no confrontations. I attempted to get comments from the crowd but no one was interested in speaking to me, only one woman allowed me to take a picture of her waving her American flag. 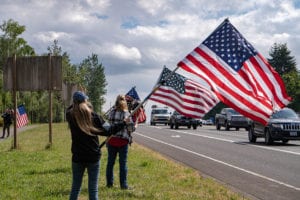 Protestors waive flags on the side of a busy street.

Things were relatively quiet until a man announced that Antifa was nearby and would head our way soon. This seemed to arouse the crowd, and people began to chant “F**K ANTIFA.” 30 minutes had passed and Antifa still hadn’t shown up. I could feel a restlessness in the crowd, and it was apparent that many of the Proud Boys had been gearing up for a fight. It wasn’t long before a group of Proud Boys started walking towards Clackamas Community College, and where Antifa was supposedly gathering.

The Proud Boys were met by a line of Police Officers who were standing behind a sign that read “campus closed”. The officers said they were there to stop any conflict. I tried to get a statement from the officers but they declined to say anything else. I continued past the Police line with a reporter from Pamplin Media, Zane Sparling. We thought we might be able to find the antifa demonstrators at another shopping center, where they were supposedly gathering.

We arrived at the OC Point shopping center only to find a MOD Pizza, Jersey Mike’s, but no Antifa. Back at the Berry Hill shopping center, flag wavers were still demonstrating. I noticed It was starting to get dark and decided it would be best to head home. Even as I was leaving, there were still hundreds of demonstrators gathered along Highway 213.