College gets a makeover 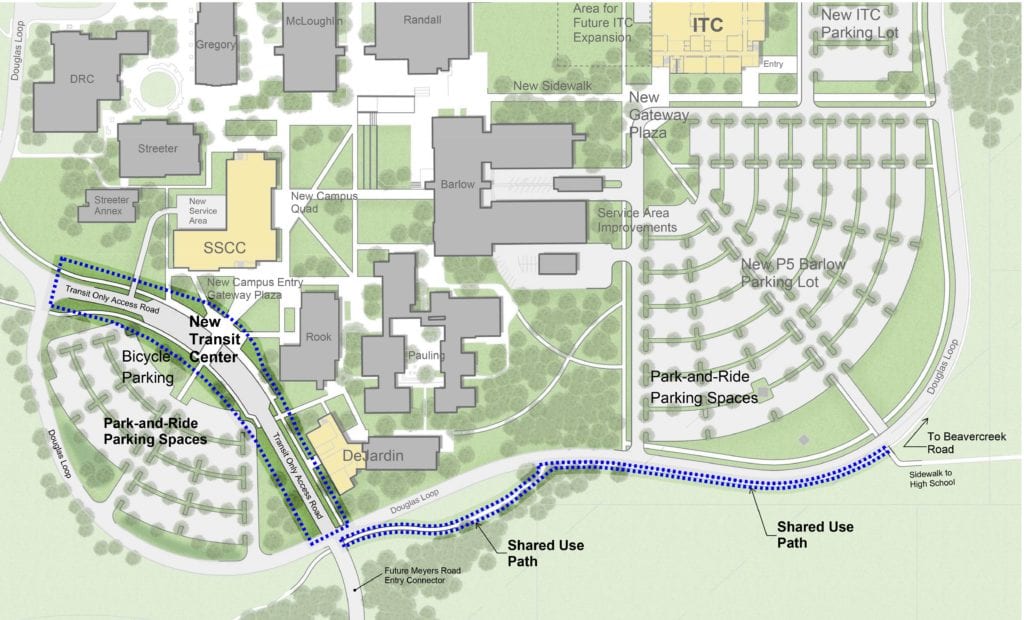 As students wait for construction to be completed on the Harmony Campus and at Randall Hall, many will be surprised to hear that there is much more to come.

In November of 2014, a $90 million bond was approved to update and improve the facilities at Clackamas Community College. The bond was developed after a large community outreach, asking the community what they needed out of the college.

The bond money is for the completion of these projects: the current project at the Harmony Campus to replace the former OIT building, current construction at Randall Hall, building a brand new Industrial Technical Center on the Oregon City Campus, an addition to the DeJardin science building, replacement of the current Community Center along with other building repairs and minor upgrades. The college has five years to complete the projects.

The large improvements will likely cause minor traffic issues and other inconveniences, but students are looking forward to improvements like the one going on at the Harmony Campus.

“The old building was primitive,” said Andrew Nelson, a student taking classes at the Harmony Campus. “Hopefully it can accommodate more things than it used to be able to.”

Of the upcoming projects, the ITC project will likely have the biggest effect on current students.

Construction of the new building, which is scheduled to begin in March of 2017, will eliminate the current tennis courts and will include a complete remodel of the whole parking lot behind Barlow Hall.

One of the cool things about this project is this is our renewable energy classroom, so we’ll have solar panels on this,” said Bob Cochran, the Dean of Campus Services. “The state requires all state projects to invest 1.5 percent of the construction costs into renewable energy, so we’re using solar on this.”

According to Cochran, the state allowed the solar panels that would have been used on the upcoming projects of the Community Center and DeJardin to be placed on the ITC facility instead. There will also be solar panels at ground level for students to see and learn about.

Another big project in the planning is the DeJardin addition.

“DeJardin phase two is an expansion of the current DeJardin building,” said Cochran. “Our hope from this expansion is to turn DeJardin into our science facility, having 90 to 95 percent of our science classes in that one facility.”

Science instructors are excited about the coming changes.

“The hope is that the DeJardin addition will not only give our students more modern facilities to work in, but also increase the number of sections that we will be able to offer, so that the availability of classes will be better for students,” said Eden Francis, the Science Department chairperson and chemistry instructor at CCC.

Cochran added that the Pauling facility, which was built in the 1980s, has “outlived its useful life for teaching science,” and that he hopes that DeJardin can turn into a “cutting edge science facility.”

“We’re not sure what will happen with Pauling,” Francis said. “If the addition on DeJardin can accommodate all the space we need for the current demand plus a little growth, then maybe all the labs will be moved there.”

The addition of this facility, which is still in the programming and planning phase, will add state of the art science labs for chemistry, biology, microbiology and anatomy. Included with this project will be a new parking lot replacing the current one by Roger Rook and DeJardin, a new pedestrian path from the Oregon City High School and a brand new transit center.

“We plan to improve the path connecting to Oregon City High School to make it safer for students,” said Lori Hall, the Public Information Officer at CCC. “Then we will create up to 12 bus spaces for mass transit.”

According to Hall, the transit center will be not only used for students to get to and from school, but also for community members to get access to businesses in the nearby area.

In addition to the transit center, there are plans to extend Meyers Road from its intersection at Highway 213 and connect it to the high school.

“As a requirement of our growth, the city wants to do that,” said Cochran. “And a third entrance to our college will come off of Meyers Road.”

Also included in the planned future upgrades for the school is a new building that would replace the current Community Center. It will be built between Streeter and where the Community Center is now.

“When we get the funding for it, the building will be moved out, making the quad bigger and make it a better entrance with the new transit center,” said Hall. “In the Community Center, we would house everything including registration, and have all the services to get students all the help they would need.”

Other small projects included in the bond are: roof repairs, which has already been done on a few buildings; storm water replacements, which is expected to happen during spring break; and elevator upgrades, which was postponed until summer of 2017.

For more information about the bond measure and the project, check out Clackamas Community College’s website.