Walking back and forth from school should be an easy task, unless it starts to rain and get muddy where there is no sidewalk.

“If you’re headed out from our main entrance to Molalla 213, there’s not a sidewalk there, and that was an issue for us because we have students who are walking on the side of the street, which is dangerous, and if you’re a student with a disability it can be a real barrier,” said Luke Norman, the Transportation Systems Analyst at the college.

To fix this problem, Clackamas Community College applied for the Oregon Department of Transportation grant in the spring of 2016 and requested $98,700. The college received the full grant in the summer of 2016. CCC also received a grant for $1.7 million for the future construction of a new transit center with 12 bus bays.

According to Norman, part of the reason that the college was awarded the grant is because it has multiple transit services. Some of these services include TriMet, South Clackamas Transportation District from Molalla, CCC Express and Canby Area Transit.

This grant will cover 90 percent of the cost to start construction on the sidewalk. The college’s bond, $90 million that was approved by voters in late 2014 for construction projects, will pay for the other 10 percent. 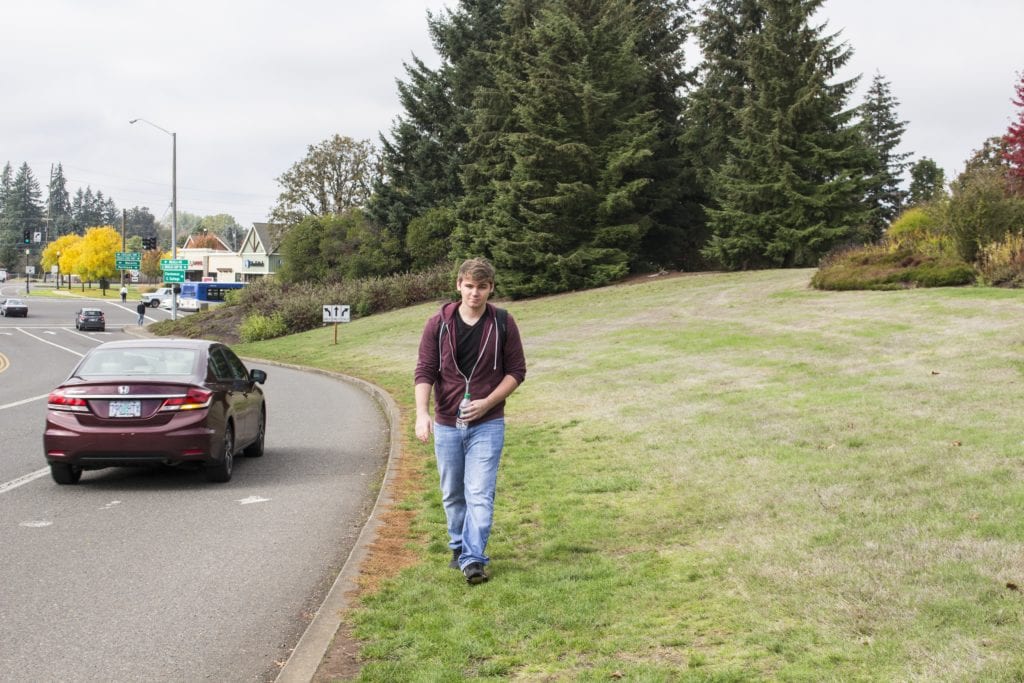 “The bond really makes this possible. It focuses staff time on improvement to the campus, it allows us to use extra resources and it also allows us to make sure the path connects with the new infrastructure on campus,” said Norman.

As to why the sidewalk was never completed in the first place, Bob Cochran, the Dean of Campus Services, said, “A long time ago, a sidewalk on that side wasn’t really needed. There’s a sidewalk on the other side of that entrance way that people used, but when OC Point developed with all the restaurants and businesses there, then people started going back and forth to that corner to access those businesses.

“In summary, we didn’t want to build a sidewalk there and then have to tear it out if we had to buy the alignment of the entrance road, so now that the bond has passed and we know what the entrance road is going to look like we can build the sidewalk with certainty without tearing it out,” said Cochran.

There have been several requests from students, community members and people working at the college to have a sidewalk built.

“I actually walk here,” said McKenna Panasewich, a student at CCC. “Occasionally I’ll get a ride, like I am right now, thank God, but if I wasn’t I would have to walk in the grass and it’s starting to rain and that would suck for my shoes. It’s just dangerous because it’s like how am I supposed to get out that way? For the most part there are sidewalks, but that would be nice for people with bikes so they don’t get hit, it’s less dangerous.”

Construction will not start right away. According to Norman, the transit center and the path will be under construction in 2018 and 2019.

“It should be about six to eight weeks maximum. It’s not a complicated project,” said Cochran.

When the project is complete, it will be a 10-foot wide, paved path that is one-fifth of a mile long.

Anyone coming to and from campus during construction should be aware that there will be traffic, but the benefit of this project is that it will become safer for anyone that walks, bikes, or has a disability.