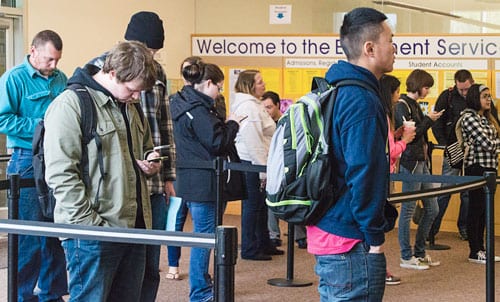 $90 will buy you a car battery, a great meal with your partner and a 1-credit pe class at Clackamas. before fees.

Clackamas Community College students will see a $3 increase in tuition, from $87 to $90 per credit, starting this summer term. A typical four-credit class will cost $360 before fees.

Other colleges going through this change include Portland State University and the University of Oregon.

PSU’s board of trustees voted on a 3.6 percent increase for in-state tuition. During the meeting, board members had to be relocated to a basement of a nearby building because they were disrupted by student protesters shouting in attempt to be heard. A four-credit class for the 2016 – 2017 school year at PSU will cost $768.

At the University of Oregon, the board of trustees voted to increase tuition by 4.8 percent for undergraduates. Students walked out in protest during the meeting, led by a student government member. One four-credit class at UO in the 2016 – 2017 school year will cost $792 in tuition; after fees, the course costs more than $1,300.

At Clackamas, Associated Student Government president Brent Finkbeiner said without the increase, the college could face the reserve funding being depleted in 2021.

Finkbeiner presented classes with a short presentation about the increase; an ASG-sponsored forum told students about the need for the tuition increase. Finkbeiner added that the current trend is attacking administration but that, “We need to unite instead of fight.”

Jim Huckestein, Vice President of College Services at Clackamas, said there were two overriding concerns that the college and the board shared.

Huckestein said the Public Employees Retirement System reform that the legislature put into effect a few years ago was overturned by the Supreme Court. There is a $32 million increase that “we owe” PERS.

Students pay approximately 30 percent of the total cost of instruction, about $9 million. A small incremental increase over time would allow students to plan for it, rather than levy a large increase all at once. It would allow them to ramp up to that additional expense.

Huckestein said the second issue is being able to maintain public safety and security.

“Our officers are currently commissioned by the Clackamas County Sheriff Office and that commission ends in June 2016,” Huckestein said. If we want to have peace officers on campus after July 1, it would cost upwards of $300,000 per year.

Students like Mickey Artsen would be adversely affected by the increase. Artsen said, “I pay for all my school by myself. I would not be able to go to school.”

Huckestein said many students currently need financial aid, so the $3 increase will not incite change in the need for aid. There are programs that would help. 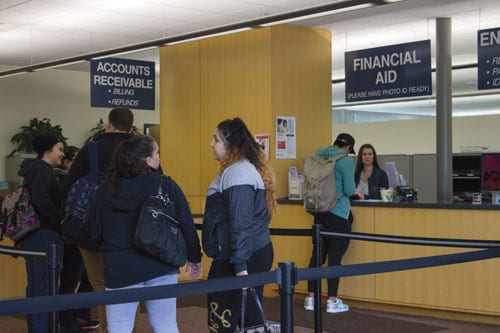 Students wait in line to discuss and get help with their financial aid.