Associated Student Government hosts a volleyball game for anybody to play 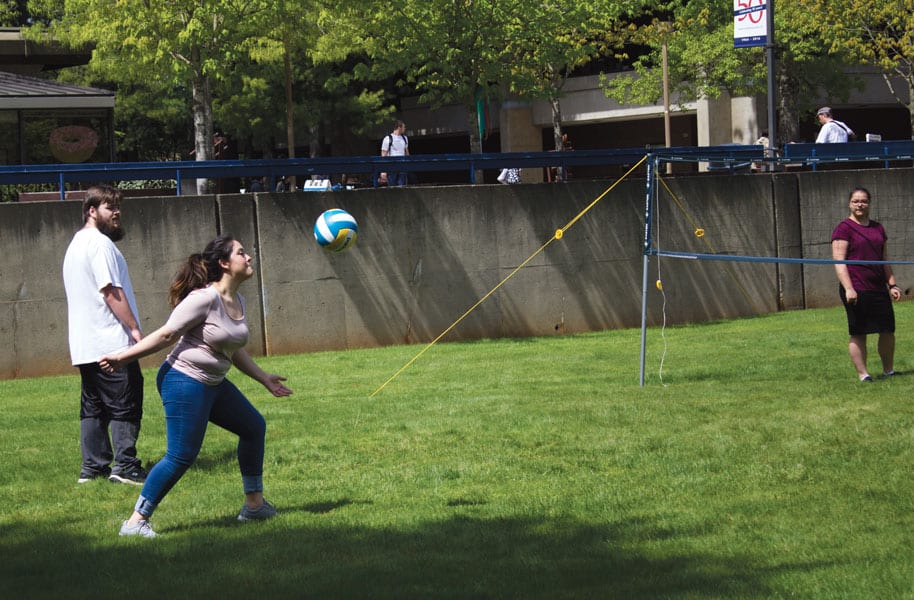 Every term, the Associated Student Government typically hosts an intramural athletic event for Clackamas Community College students to enjoy, and the trend has continued into spring term.

This term, ASG hosts an intramural volleyball game once a week.

On Tuesdays, ASG sets up a volleyball net in the grass between the Community Center and Barlow Hall. Any CCC student that stops by between noon and 1 p.m. can participate as long as they sign a waiver.

Alexa Carrera, the ASG member in charge of the event, talked about the event and encouraged anybody to join and ensured the game would be laid back.

In the fall, there was flag football and soccer. However during the winter term there was no intramural games because ASG couldn’t find anybody to take care of it.

So far this term there have been only a few people who have shown up each week, aside from when it was rained out twice in the first two weeks, but Carrera looks to improve it and get more people to show up.

“I still have to get the word out a little more,” Carrera said, “but once it starts getting sunny out, people are going to be outside and want to play a little more, so they’ll see the [volleyball] net.”

If it’s a nice day it is hard to miss, considering it’s roughly in the middle of the campus. According to Alex Ticknor, an ASG member who helps set up and watch it every week, it is easy to play.

“All you have to do is sign a waiver in case you get hurt,” Ticknor said. “Once you sign that, you can play.”

Kristina Shevchenko, who played just a couple weeks ago, said she sees potential in it.

“I definitely would come back, I will be here every Tuesday,” Shevchenko said. “I think if enough people know about this going on, it could be a big thing.”

ASG plans to continue to have events similar to this every fall, winter and spring term.

A volleyball net will be set up every Tuesday that isn’t wet and ASG encourages anybody to join and invite anybody they would want to play with.

“Everybody is welcome,” Carrera said, “so don’t be afraid to stop by and say ‘Hey I wanna play.’”