Eight journalism students get their first trip to Washington D.C. 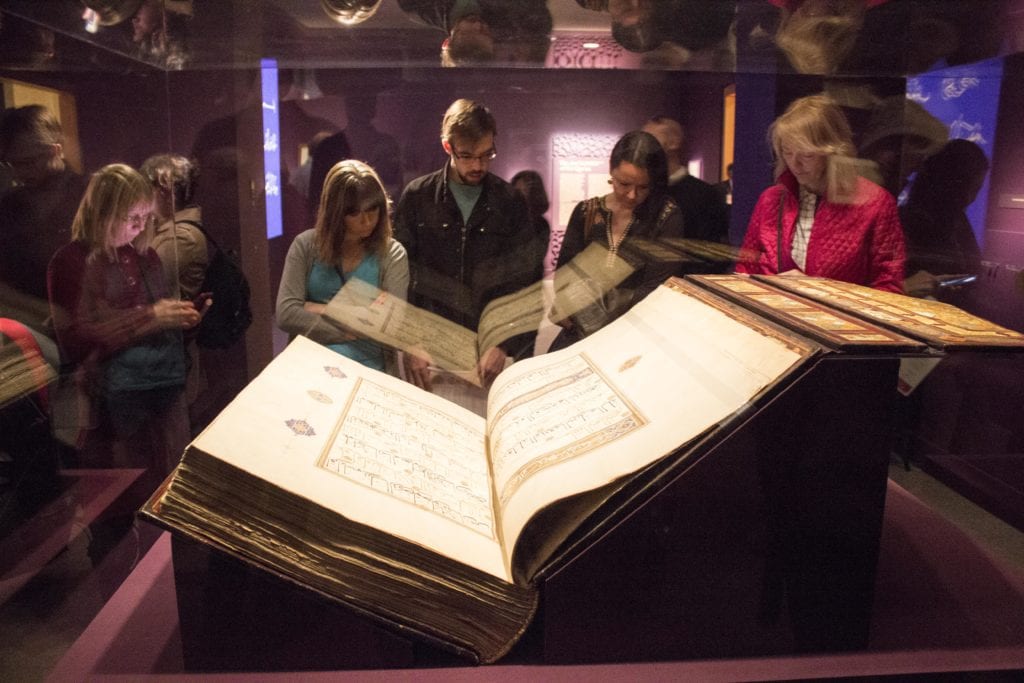 The opening of “The Art of the Qur’an,” at the Smithsonian’s Sackler Gallery was held Oct. 22. Students from Clackamas were able to attend the event.

Eight members of The Clackamas Print traveled across the country to attend the Associated Collegiate Press College Media Convention in Washington, D.C. in late October. This is the largest media convention for college students in the fall, having more than 200 sessions with experts and advisers.
Founded in 1921, ACP’s mission is to “serve media and advisers, introduce new ideas and reinforce best practices, reward excellence, embrace diversity and provide ample networking and partnership opportunities.”
Along with awards and exhibits, the convention also featured keynote speakers including Donna Brazile of the Democratic National Committee, Bob Woodward of the Washington Post, Jose Antonio Vargas of #EmergingUS and Edward Snowden for the Freedom of the Press Foundation.
Spanning the course of three days, students had the opportunity to participate in events such as the photo shootout, two separate movie screenings, and a plethora of media tours including National Public Radio and CBS. As a part of attending the convention, students also had limited opportunities to sign up for a tour of the White House. With eight of our staff being on the trip, we were able to split up and conquer the convention. In our five days in D.C. we covered a lot of ground including visiting the Newseum, touring the White House and even catching an NBA game.
Like us, some journalism students traveled far for the convention. On our flight home, one of our staff members sat next to a student from Emerald Media, the University of Oregon’s student news operation. Throughout our days in D.C. we met people from all over the country, including students from Colorado and students who lived so close they could take the local Metro to the convention each day.
“[I’m] very impressed with my first ACP conference,” said Lauren Berlingeri, a public relations student who traveled to the conference from Oklahoma City, Oklahoma. “Spectacular keynotes and great location.”
“My favorite part of the conference were the keynote speakers! They weren’t nobodies, but big names who’ve done big things,” said Berlingeri. “It was like watching history in front of you and reaffirming those events did occur, because they were a part of it. My favorite keynote was Edward Snowden and many people were jealous that I got the opportunity to listen to him speak.”
Listening to Snowden was definitely a highlight of the conference. The former CIA employee, who copied and leaked National Security Agency information, is considered a hero among many journalists. There was a record-breaking audience of hundreds who had the opportunity to listen and ask questions via satellite with Snowden, who is still in Russia.
“If you’re not willing to do the right thing, particularly on this scale, to do something for your country because you’re afraid of being called a couple bad names, you don’t care about your country that much,” Snowden said when he was asked about how he responds to both personal attacks and allegations that the leaks compromised national security.
“The reality is, this is more important than words. This is more important than my reputation.”
Snowden also stated that if he could turn back time to do it again, he would have done everything sooner.