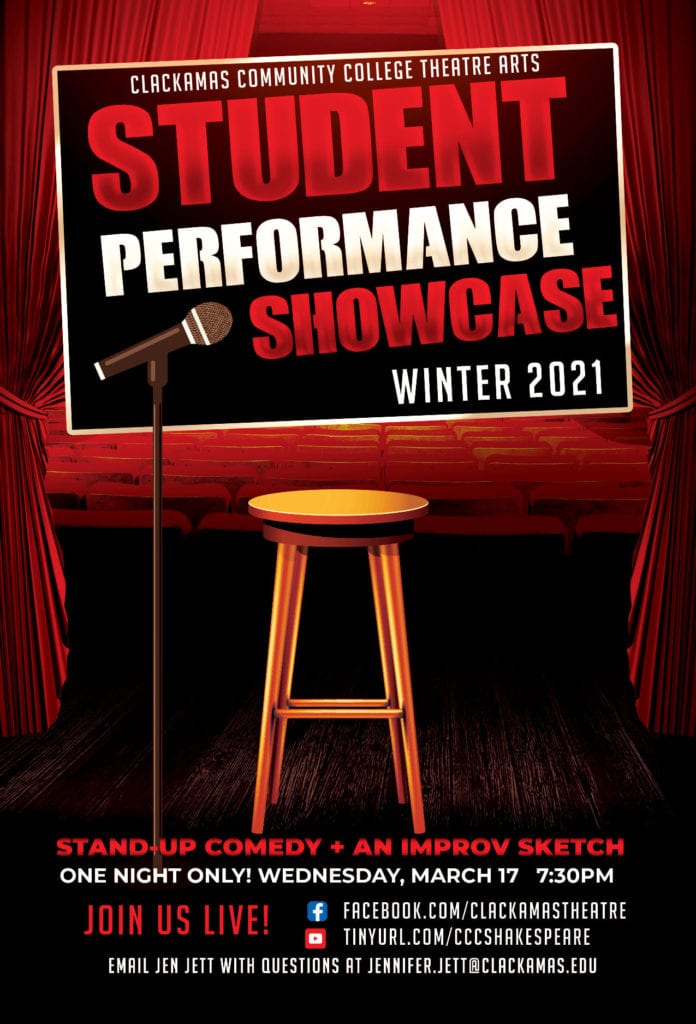 In this curious time of shutdowns and closures, some theaters are managing to produce shows using a modern medium. Streaming live productions is one way that theaters companies have found to keep performers onstage and audiences engaged.

Clackamas Community College theater students will stream their next performance March 17-19, at 7:30 p.m. and include a student performance showcase and special “Zoom-stage” featuring a mash-up of Shakespeare’s most famous plays. Catch the theatrics on CCC’s Facebook and YouTube.

When casting a show, Eikrem said many of the same elements are in play. During auditions, he observes the actors to ask, “Can they learn material? Have they prepared materials? Are they enthusiastic?” Eikrem finds that an actor’s willingness to prepare and to be directed while building a character comes through during a video audition.

“I’m a stickler for being very precise with the text,” Eikrem said. Rehearsing over video streaming is good for text study as it allows for text precision and truly concentrating on the words.

“There is a sense of interaction,” said Eikrem. “We had a very talented student do one where she edited it so it appeared they were onstage together in front of a curtain.” Sometimes a director needs to have one character look left while the other looks right, so it can appear that they are talking to one another. But the directing itself changes little.

When asked if a director gives up some control due to the technology work being done by someone else, “It’s really no different,” Eikrem said. “At some point, it has to become about the technical aspects of a production.” Even when doing live, in-person theatre, producing a show is a communal effort. Theater is done by a collaborative effort of people with differing skills.

Chris Whitten is the technical theater instructor for the CCC Theater Department as well as the scenic designer for the department’s shows. He says that designing for this medium is “the same amount of work, but you’re compressing it into a smaller format.”

“First of all, we have found being not-live and doing theater required just the same amount of work. It’s just different,” Whitten says. “In live theater, when we’re looking to create scenic environments to help tell the story, we usually start small and enlarge that. This is taking what seems large and pressing it into a smaller format.”

“When the pandemic forced all of us who are in this large group format of arts that is theater and music and dance, we suddenly were compressed into this unique but challenging format that is digital to attempt to maintain some of the same outcomes for the audience,” said Whitten. “We didn’t have an introduction or game plan necessarily.”

“From spring term to fall term was a fairly large learning curve for us and then fall term to winter term, we increased that through experience and trial and error,” Whitten added.

New additions and refinements have been added over time. Whitten’s designs for each show now include a proscenium arch and back set walls and scenery that are projected onto a green screen that each student has been loaned by the department.

Audience response has been growing. For the first show, there were approximately 30 people watching live. The department’s videos have been watched by a few hundred audience members now.

Bringing together the disparate elements of isolated actors, an off-site director, costumes, sets and props is the job of Jennifer Jett, the Theater Department’s Administrative Assistant. Her background with video production software has been invaluable as well.

Both Eikrem and Whitten expressed appreciation for her expertise and hard work.

The process of producing a streaming production can be intricate. Distributing the costumes and props to the student actors is done through careful packaging and scheduling to avoid virus transmission, adding a new layer of complication to the process.

“We coordinate costuming and different things for the production, props, things like that.” Jett said. “About two weeks before we’re ready to do the production, we have everybody film themselves doing the actual show on Zoom. And then we take that video and we put it into video production software, and we add backgrounds, sounds, music, things moving in. This term we’re adding in smoke.”

“I head that up. I have someone who works with me on that too. We work together and then we stream it to Facebook and YouTube.”

“It’s hard because we’re at this place where we have to show we’re doing something. So we have to do it.”

Jett states that the hardest thing was the problem of varying equipment quality. Initially, each student used their own equipment at home, both cameras and lighting. Last term the department was able to issue green screens, microphones and this term the department checked out webcams to each student, which improved the quality. Each webcam has built-in light, so everyone has the same lighting.

When asked if there was an “easy” Jett said, “No. For me, I have a lot of experience behind the scenes. Doing some of the work was stuff I normally could do. But there’s a lot of things I had to learn.”

“In the last show, there was a neon sign that lit up,” Jett said. “I created all of that. There’s a lot of things we’re doing that are a challenge, but fun.”

After the initial recording of the performances, Jett and another theater employee, Dante Ross, processed each actor’s video. Whitten’s scenic designs, music and sound effects, as well as credits and titles are then added and refined.

“It’s a massive amount of work,” says Jett. When asked if it was worth it, Jett paused a moment and said definitively, “yeah.” She smiled.