As the Harmony Campus prepares to finish its brand new building, the Oregon City Campus at Clackamas Community College prepares for its own new building, and a big change.

In November of 2014, the college passed a $90 million bond measure to update and expand college classrooms and labs. The first phase, which is currently underway, replaced a 61-year-old technology building on the Harmony Campus to expand health science. The second phase, which is set to start this spring, is to build a brand new Industrial Technical Center at the Oregon City Campus.

The ITC building will be built near the track, in front of the current tennis courts. The project will also include a remodel of the parking lot behind Barlow Hall. The tennis courts will close at the end of spring term, officially on April 1.

The new structure is set to be a state-of-the-art, two-story building that essentially expands and upgrades the current Barlow facility.

The college plans to bring most of the manufacturing technology classes to the new building from Barlow hall. The new ITC building will have more machining space, two computer labs, five classrooms, a flexable lab and renewable energy learning space.

The ITC building, which for now is just a placeholder name, is going to have much more space than what is currently in Barlow.

“These programs are using about 14,000 square feet of space in Barlow right now,” said Mike Mattson, the department chair of manufacturing. The new building will have about 44,424 square feet.

Mattson also talked about the current cramped conditions in Barlow.

“If you go down in the machine shop right now, you’d see that we are elbow to elbow. You have to crawl through machines just to get to the bathroom,” Mattson said. “The space down there now was never designed as a machine shop, it was a diesel shop when the building was originally built and retrofitted. It was never designed to do what it is doing right now.”

With a larger new building, there will also be more space for students to learn in the classroom.

“Our biggest classroom right now is about 525 square feet,” said Mattson. “All of the classrooms in the new building will be about 1,000 square feet. People were dragging chairs in, and people were crowding in corners without a desk to sit at.”

With the added space, there will also be new, high-end equipment for students to access.

“We partnered with Gosiger,” said Lori Hall, the public information officer at CCC. “They have large big equipment that they didn’t have a space to showcase it, so we let them use our space, and in exchange our students get to train on state-of-the-art equipment that they can know when they go out and get a job.”

According to Bob Cochran, dean of Campus Services at Clackamas, each piece of equipment is worth more than $100,000 and even up to $500,000.

“It’s high-end equipment that we would have no chance of buying for this purpose, so it’s a very advantageous program for us,” Cochran said.

With the new building being built with added space and new equipment, it wouldn’t come as a surprise to Cochran to see an increase in enrollment.

“When you expand a building like this, your course load should go up,” Cochran said. “People get excited about being in a new building, students see that and want to be in there.”

The school has also decided to use all solar panels that could’ve been used on future projects for the ITC building, so there will be a significant solar array on top of the new building. There will also be some panels on the ground for students to view and use as a field lab.

Once everything is moved to the new building, the area in Barlow will still have use, according to Cynthia Risan, the dean of technology, health occupations and workforce at CCC.

“Automotive will expand,” Risan said. “They’re on the other wing of Barlow, and they’ll expand to both wings of Barlow.”

With the much needed improvements coming to the building, Mattson is ready and excited for the building to just begin.

“It’s been a long time coming. It’s super exciting. It’s like waiting for Christmas, but they keep moving Christmas, so I’m going to be really happy when they break ground, that’s for sure,” said Mattson. “This is a high value investment for the community. There are great jobs at the end of the training period for all of these students and each student that comes through this program.”

The groundbreaking start date is set to be on April 6, from 4-5 p.m., which is when the project is officially set to start. 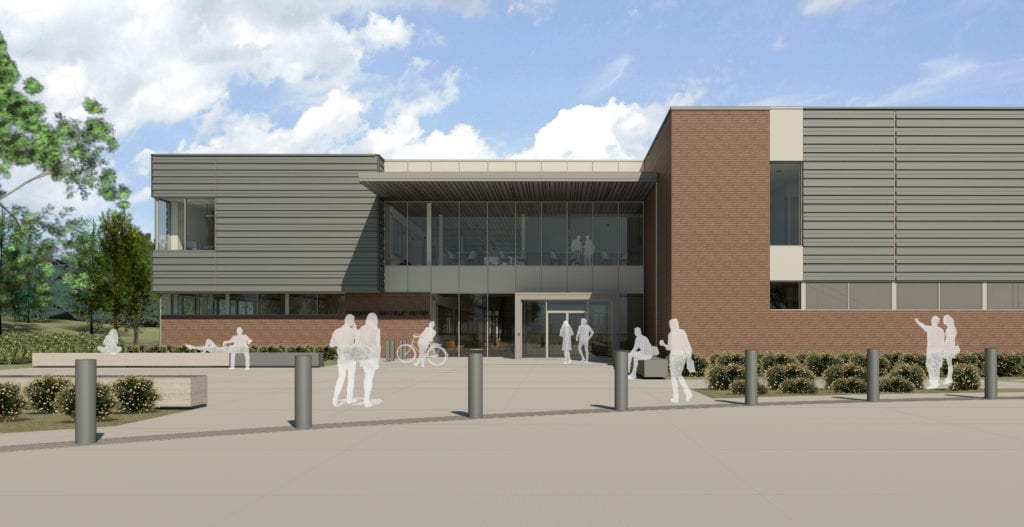 Above is a rendering of the entrance of the proposed ITC building. The college plans to break ground on April 6.