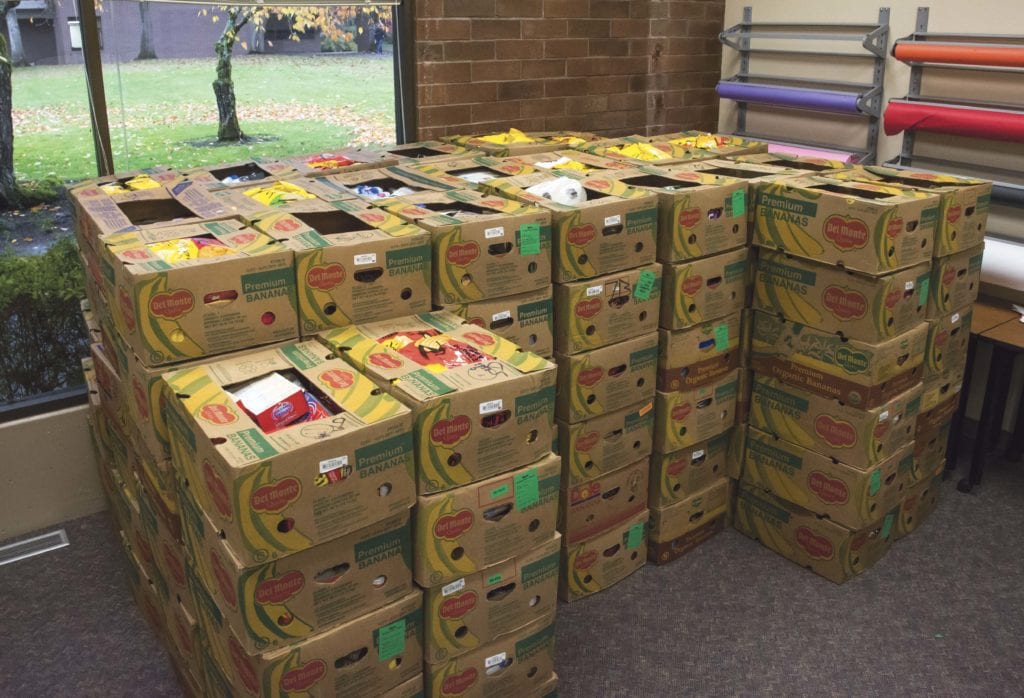 Two-thousand pounds of food were donated by Daryl Woods, father of Tori and Kristin Woods, to the Cougar Cave for the ASG food drive.

One ton of food donated to CCC Cougar Cave.

The Clackamas Community College Cougar Cave food drive is almost over, but two first-year experience students convinced Albertsons-Safeway to donate over 2000 pounds of food to the student-run free pantry. Associated Student Government Community Wellness Director Rachael Morgan is in charge of the Cougar Cave, and is excited to have such a huge donation.

“We have so much food right now, so, obviously, the more we get, the more we can give away to students,” said Morgan.

Sisters Tori and Kristin Woods are both in first-year experience classes, and heard about the food drive. They told their father about the need. Their father, Daryl Woods, is a CCC alumni and distribution manager for the Albertsons-Safeway chain. The sisters worked on emailing and talking to people, and were able to secure the six-pallet donation quickly. Both came to the Cougar Cave to help deliver the food, and were excited to see the result. “It feels great to see everybody helping and getting together,” said Tori Woods.

Due to low donation levels, the Cougar Cave typically has a food drive every term. Now that they have a surplus of non-perishables, they aren’t sure that they will have to run the drive next term. ASG usually depends on individual students and faculty members for the donations, but this term has been more than successful for the Cougar Cave. First-year experience classes have been helping to stock the Cougar Cave, and raise awareness of the needs on campus.

“I think that the students who are in first-year experience taking on supporting the Cougar Cave for other students is a terrific project, and it really heightens all of our awareness, in regards of where we come from, food matters, and that food insecurity is here, among us,” said CCC president Joanne Truesdell.

Awareness, or the lack thereof, is a problem on campus, and the ASG is trying to find more ways to let people know about the Cougar Cave, and donating.

“It’s hard for people to focus on school when they’re worried about where their next meal is going to come from, and a lot of people will drop out of school, or just not do well in school because of the hunger issue, and the Cougar Cave’s purpose is to alleviate that problem as much as possible for students here at CCC,” said Morgan. This term’s food drive runs from Nov. 6 to Dec. 1, and the Cougar Cave is well-stocked for the upcoming winter term because of it.

Huge grocery chains haven’t been the only ones to donate this term, though. Meineke Car Care Center is running a year-long drive for the Cougar Cave at their location in Oregon City. ASG’s free-food market on Thursdays is supported by fresh-food donations by the Gleaners of Clackamas County, a Community Food Share.

Students can donate any time during the term, not only during the food drive. Aside from canned and boxed foods, donations of hygiene items, shoes, school supplies, and professional clothing are appreciated. One big thing Morgan noticed that they need is can-openers. Even with all the canned foods donated, someone coming in with a need might not be able to open them. Donations can be taken at the front desk in the ASG office in the Community Center, or in the Cougar Cave, right across the hall. Students do work-study or volunteer their time to oversee the Cougar Cave.

“Some people can sit on the sideline and do nothing, and, or turn in a can or two, and some people can go out and ask, and it just takes people to ask,” Said Truesdell. Supporting the community is important, and donating to the Cougar Cave is just one way you can support fellow CCC students.