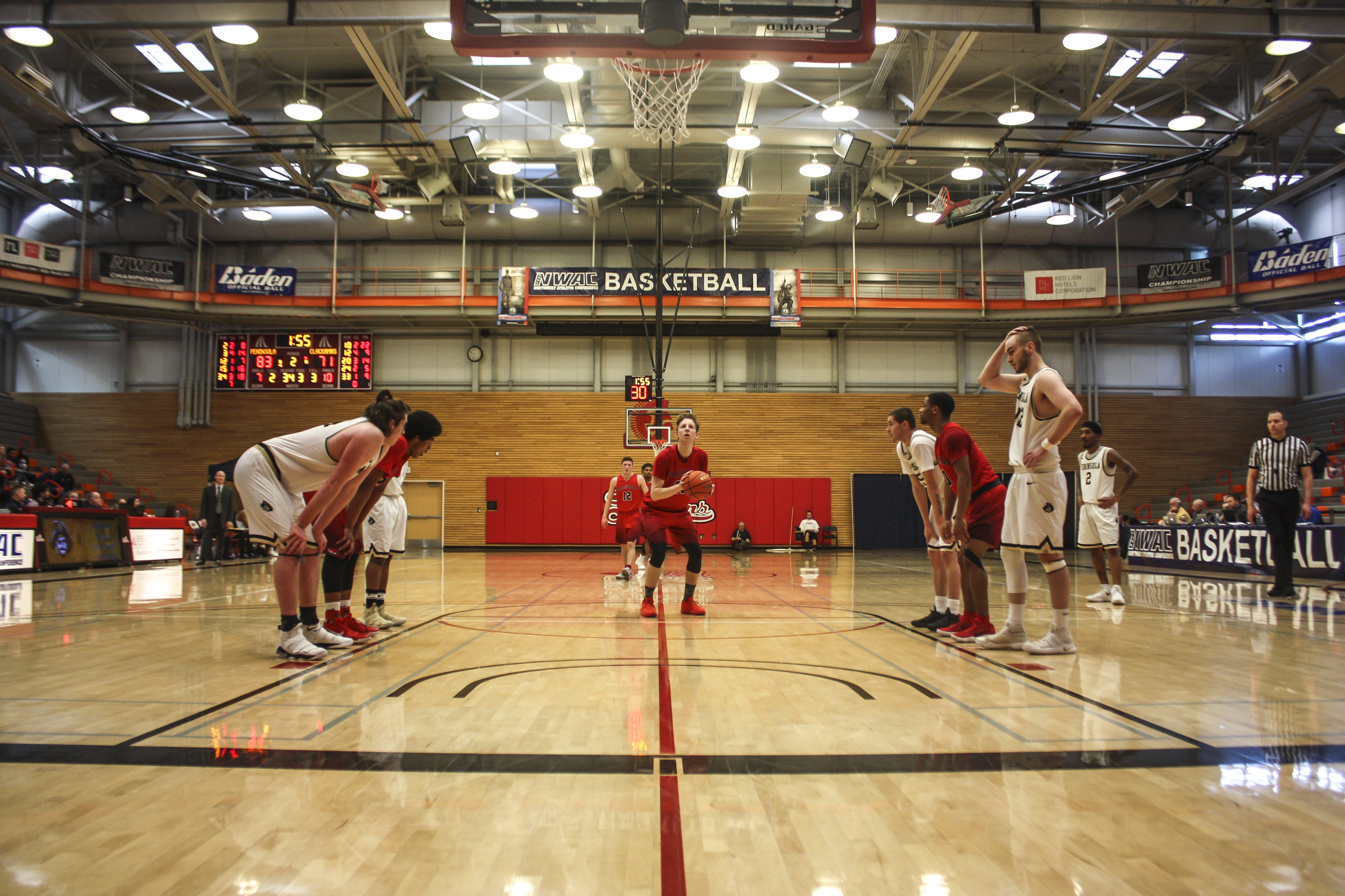 The Sweet 16 round of the NWAC basketball playoffs, was not too sweet to Clackamas Community College’s Men’s basketball team Saturday. As the Cougars fell to Peninsula College 74-87 ending their 2017-2018 campaign.

It was a shaky start early Saturday morning for the Cougars, who found themselves down 8-0 in less than three minutes after the opening tip-off. Head coach Clif Wegner burned a quick timeout, and tried to settle his players down and it seemed to work. The next possession for Clackamas led to a three-pointer from freshman post Adam Gehrig and that sparked a 17-4 run for the Cougars that gave them a 17-12 halfway through the first half.

“I felt like we were really controlling the game,” Wegner said. “Even though we weren’t pulling away [on the scoreboard].”

The Cougars remained in the lead until Peninsula’s big man, Marky Adams hit a layup to tie things at 26-26 with 6:01 to go until halftime. For the next two minutes Peninsula outscored Clackamas 5-0 to take a 31-26 lead. Sophomore post Shawn Carson scored a layup to end the drought and the two teams once again traded buckets until half, Peninsula leading 39-35.

Sophomore guard Nygil Carr led the Cougars in scoring for the first half going 5-13 from the field for 13 points, Carson added eight points, and sophomore guard Isaiah Gentry had five points. The Cougars outrebounded Peninsula 20-19, and had seven more assists, 10-3, but a slow start offensively in the beginning of the second half would have Clackamas in trouble again.

Both teams struggled offensively to start the second half, but Peninsula put together a 6-0 run that gave them a 45-35 lead. Genty scored the first bucket of the second half for the Cougars with 15:47 remaining in the game. The Cougars were able to bring the game within four after sophomore guard Briggs Young hit a jumper, but four was as close as Clackamas was able to make it. Freshman post Donavan Tafua made a layup with 5:01 left in the game and it looked like there might be a little Cougar magic brewing, but on the next possession, Peninsula hit a three-pointer to make it 78-69.

“They started hitting shots and had good offensive runs. I mean, we had ours too, but they just had more than us,” Carr said. “We weren’t on shooting our shots today.”

Peninsula was able to control the game the rest of the way and won 87-74. It was an emotional scene as the final seconds ticked away. With several Cougars fighting back tears and Young crouched on the court and held his face in his hands. “When it comes to an end of an era, I mean, I won’t ever play at Clackamas ever again,” Young said. “You start to think through all the memories, especially with all the players. I mean me and Isaiah are really close, Austin is close to me, Shawn and you know you probably won’t play with them again, it’s just that aspect of it.”

Clackamas made it a goal to return to the playoffs this season and they accomplished it, finishing 17-13.

“Anyone who gets to the tournament has to call that a successful season,” Wegner said. “We had a very tough conference and we were hoping to get a one seed or a two seed to give us a little better draw. Peninsula is a tough opponent.”

“Right now I’m thinking it’s going to be really hard to find a Nygil Carr and a Briggs Young and an Isaiah Gentry,” Wegner said. “Shawn and Austin have given us good stuff and Fredy’s been a valuable role player too. So we’ll just go to work and we’ve been looking at kids, talking to kids and we’ll get kids in the gym and we’ll sign the best group we can.”

Clackamas will return freshmen posts Nik Polynice, Tafua, Gehrig, and Elliot Hesse along with freshman guard Justin Crawford. Wegner said he is excited about the returning group, but perhaps it’s too early to think about next season.

“I loved the whole thing about coming to Clackamas,” Carr said. “Having coach Wegner coaching me and playing with Briggs and Isaiah and all these guys, I’m just happy I came. I don’t have any bad memories, all the memories I made out here, I love them all.”