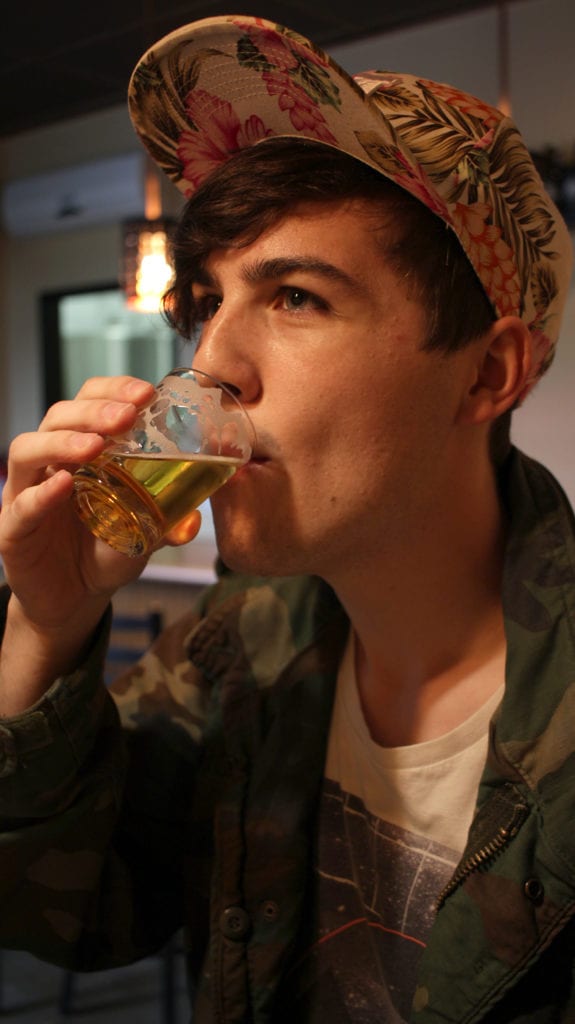 Matt Rowning drinks his first beer of many to come.

7 p.m. is an auspicious time. It’s the twilight hour where the boredom of the day culminates into the night’s plans.

At that hour I jumped into a white coffin of a ’95 Chevy pickup and belted in the center seat. To my left was my photographer and designated driver, and to my right a man I’ve never met before. We pulled away to the sound of Dick Dale hammering on the radio.

It seemed too pure a greeting for what was coming. The impossible task ahead was finding the best beer in Oregon City, and the best place to drink it. I imagined this same truck rolling sideways down I-205 at 90 miles an hour.

“Three dead men were found on the freeway this morning after a horrifying night of liver punishment and depravity. The small effeminate one wearing a floral hat appears to have suffered the most terrifying death of the three.”

Better not say anything, I thought. No need to lay a bad omen on the whole enterprise. I adjusted my hat nervously.

The first stop was Coin Toss Brewing on Beavercreek Road, next to the bottle exchange. Its name didn’t stem from the nickel a bottle you get next door at the bottle return, though. The legend of Lovejoy and Pettygrove’s coin toss for the name of Portland is the real namesake. Proprietor and brewer Tim Hohl said, “Our name is sort of an homage to the history and the heritage.”

They have 12 taps: eight house brews, two guest taps and two ciders. We ordered the flight of eight for $8.

These were fine brews. Complex, beer-drinker’s brews. On the whole, they were hoppy and aromatic, though the Honest Ale and the Half-Penny Lager were corny and sweet.

Hohl was also our host. He walked us through the history, the conception of, and the processes of his brewery. A home brewer for 20 years, Hohl said, “I was never gonna be the guy who turned a hobby into a business.” He and his wife did warm up to the idea.

“My wife and I always wanted to open a small business, be in control of our destiny,” said Hohl.

Hohl walked us through his brewery and explained the brewing process.

After, we stumbled out a thank you and left. Back into the White Coffin’s front seat

The next stop was OC Brewing Company, downtown.

Enter the brew pub. This place is serious. I couldn’t count all the taps. We shared our press credential and got two flights of beer samples for free.

Delicious, delicious beer. My favorite here was the 8-Bit Blonde, a sweet, light ale that tasted more like honey than beer. There was a red, Brigid’s Irish Red, it put to shame every red ale I’ve ever had. This beer lacked the pungent aftertaste of the imperial red, instead, it had a clean finish and a lighter body. The staff was helpful; the LCD television screens were crystal orbuculums of beer. Stare into their prophetic sheen, and you see every beer on tap, how much beer in left in the keg, the ABV and so on.

It was neat. Still, I felt a certain guilt about it. What the hell is up with television screens and beautiful outdoor seating areas? I’ve always been a proponent of gross shit.

This is downtown Oregon City. Isn’t this supposed to be the dive bar capital of Clackamas County? The last bastion of working class folk, running from Portland’s gentrifying viscera into the final fortresses of their culture?

It was time for a dive bar. Abandoned was any pretense of finding good beer. Now it was about the crawl.

Immediately next door to the OC Brew Pub is Coney Island. Inside are two pool tables, five video lottery machines and more of Old Portland than Gus Van Sant would know what to do with.

Dark lights. Glasses clink. Music plays. This is more like it.

I ordered a PBR for $2.25. A guitarist sang in a lyric baritone as a Drunk Man screamed the high notes, all out of his range. More of a texture and less of a harmony, Drunk Man’s rusty nail-gargled voice added some joy to the sound, if nothing else.

Drunk Man turned to us. “There are only two things you can come back to man. Two plus two equals four, and musical scales.” 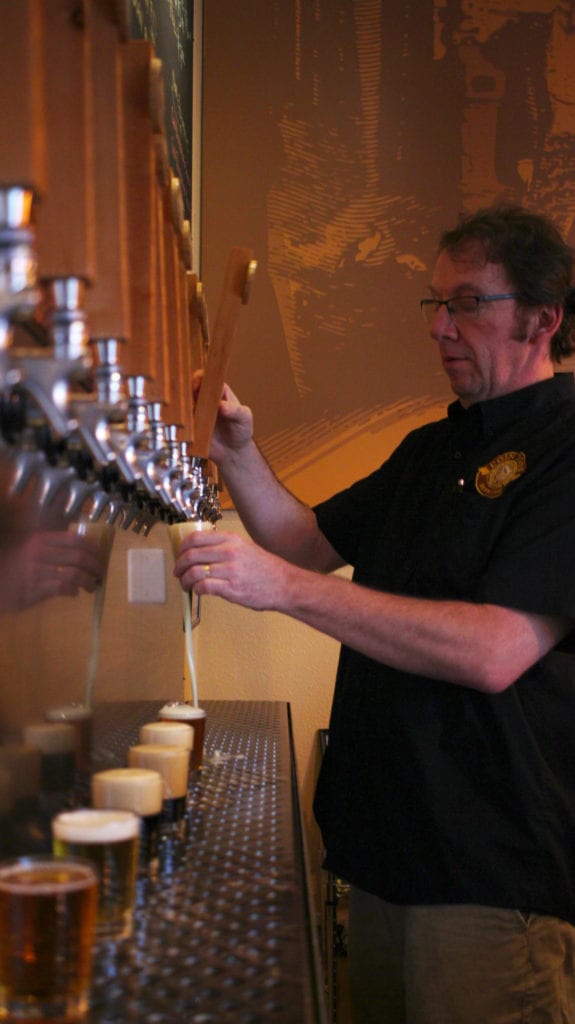 Tim Hohl pours the flight of eight beers for the sample tray.

I understood him. This was Cartesian philosophy at its most simple. Cogito Ergo Sum shit.

Laughter seized Drunk Man. He toasted us with his glass of ice. He stood, grabbed his backpack, and retreated out to wherever angels make their rest.

“Life is so fucking beautiful,” he choked out with a smile, and we saw him no more.

This was the salt of the earth. Portland’s retreating working class confined to this pasture of a suburb and left this last drinking trough. In sharp contrast with OC Brew Pub, Coney Island felt like real culture, not a carefully cultivated one.

It’s a unique culture, a dive bar. It’s comical to the upper class and disdained by the virtuous right. Coney Island may as well be Elliott Smith’s last heroin needle or Wipers’ last show at the Satyricon: old Portland. As wet, disgusting, loving and incredible as the cesspool that is.

I was not yet done with this quest. Our fellowship had one mission left, and our toughest yet: the quasicorporate, family friendly granddaddy of Portland microbreweries: McMenamins.

Inebriated. Over the line. I was about to go there and so much more. I ordered a pint of Ruby, McMenamins’ fine wheat ale with raspberry puree. We sat until late night happy hour, swearing and causing a ruckus. The third man in our party was swearing and waving his arms, but what to do?

Hey, if I get kicked out of here maybe I won’t have to pay for this beer. Let him scream.

Out of that overly-fabricated hellhole. Road. Car. We crammed back into the White Coffin. The photographer drove us back to Clackamas as I played surf songs all the way home.

We were really just that: surfers, catching a big brown wave of ale and lager, and riding it all the way home. 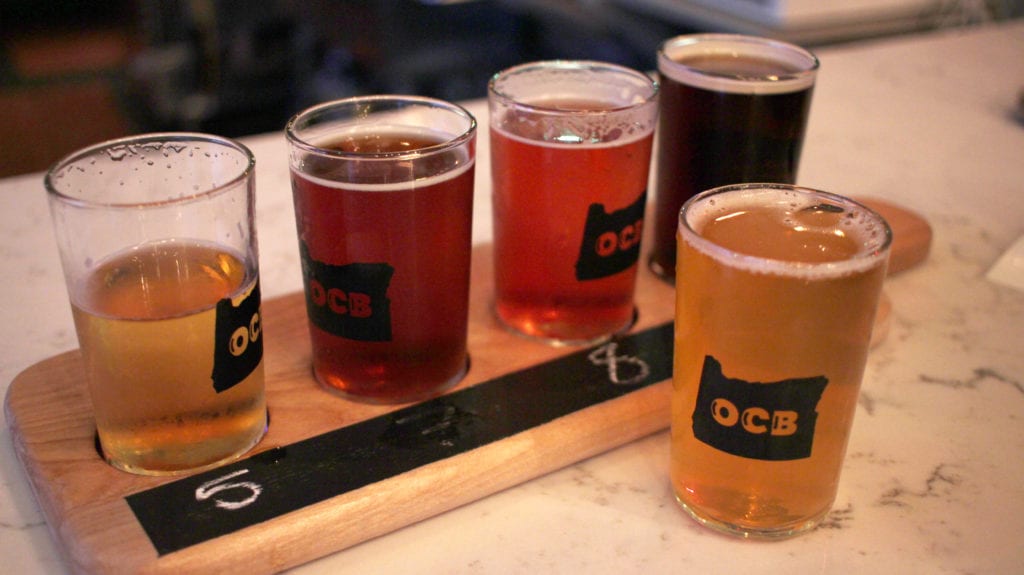