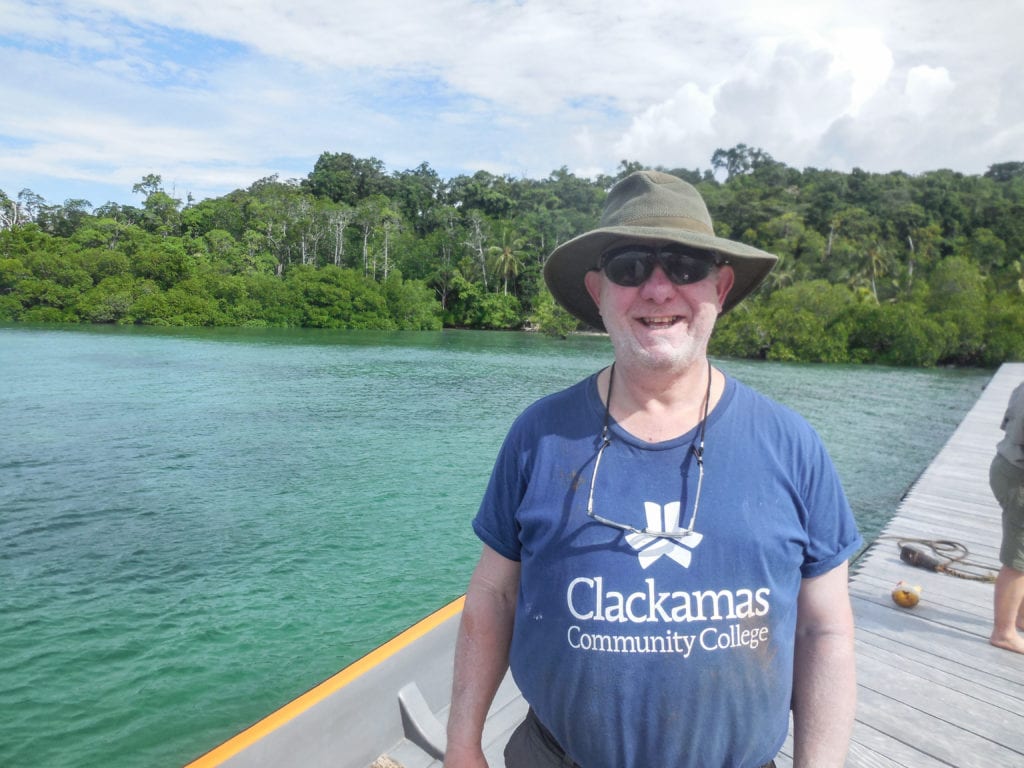 Rodney Osterhoudt stands in front of the Kia village in November.

Rodney Osterhoudt travels to the Solomon Islands to build a library

In November, Rodney Osterhoudt, a maintenance engineer for 20 years at Clackamas, traveled with his wife to St. Isabel, which is part of the Solomon Islands. Through his church, Osterhoudt and his group built a library for the village, Kia, which has about 3,000 people. On the side, Osterhoudt also visited homes to help fix solar panels, which are the main energy source on the island they went to.

The Clackamas Print: What was the purpose of going?

Osterhoudt: We went to build a library and whatever else they wanted done. And the library was a multipurpose building. It was built within specifications to withstand a category five typhoon. So it would also hold 200 people if they needed to.

TCP: What would the library do for the people on the island?

Osterhoudt: The reason for the library is because they had their school going from grades first through sixth-grade. But they would only go for three hours a day, so they only probably are getting a first through third-grade education. And with a library and more books, instead of shipping their kids off to another island to go through high school, they would have the potential of having high school all the way right there on the island, which would be a whole lot better.

TCP: Did you have any difficulties building the library?

Osterhoudt: No. The first group built steps going up from the lower school to the upper school, and we finished the steps. They unloaded the barge, and then we started building from ground up. Then, I think about two weeks later they had the walls on. They had the solar panels on because in the Solomon Islands you have to have a climate-controlled environment to where your books are not going to mold. They would only be good for about a year because of the humidity.

TCP: What did you eat in the village?

Osterhoudt: They make very good bread. What’s for lunch? Fish. What’s for dinner? Fish. And I had squid one time, it was a little tough. We had turtle one time. That’s the only place in the world where the natives are allowed to hunt sea turtles. Everywhere else you’re not allowed to.

TCP: How modern was their village?

Osterhoudt: They had their solar panels which would charge up a 12-volt battery. That’s all they had. They have people that run a store. That’s it, there’s no cars; they have their boats. To get there, we had to fly to Brisbane, Australia, which was a 14-hour flight, and then a two-hour flight to Honiara, Solomon Islands, which is Guadalcanal area. Then it was another hour trip by a real small plane to this grass field, and then an hour and a half boat ride to where we were at on the island. It was four days travel time to get there and back home again.

TCP: What was one of your most memorable moments there?

Osterhoudt: When we started raising the trusses on the building itself. One of my other times was when they had a celebration for the people who came in. There were a group of kids that were playing panpipes. Those are the bamboo pipes that you blow on. And then they had some that they were beating with hammers, rubber mallets, and those were probably about eight feet long. It was fun to watch, because you just learn to live and do with what you got.

TCP: What other travelling have you done?

Osterhoudt: I have gone to Haiti, and I worked in an orphanage there. I’ve gone to Honduras, and I’ve gone to Mexico several times, just volunteering.

TCP: Anything else you would like readers to know about your trip to the Solomon Islands?

Osterhoudt: They’re very family-oriented, and the people—I mean some places I have gone to I felt unsafe walking around—here, the people on the Solomon Islands are very nice people. They found out, because of my electrical background, I got this one guy’s solar panel going. The word went around really fast. If I volunteered again, and if I had to go back there I’d fix solar panels all the time I’m there (if I had the right equipment). But I had five or six people come up to me and say, ‘My solar panel is not working, can you fix it?’ Well I’m only there in the country for 11 days, and so I can only do so much.

TCP: Would you go again? Or somewhere else?