Since Clackamas Community College took over the Environmental Learning Center in 1996, there have been many pushes to figure out a way to utilize it on campus. With a grant approved by Metro in 2014, the college is beginning to tackle the preliminary steps to revamp the space.

The project, whose concept design was approved by Metro back in 2012, had to be approved by the CCC Foundation before making an official grant application to Metro. This was taken up by CCC Foundation Executive Director Greg Fitzgerald, who lobbied the Foundation to approve funding.

“The next step after [the concept approval] was me taking it to the Foundation board to say, look, you guys have said we are going to have this $10 million fundraising campaign, $7.5 million for scholarships and instructional support and $2.5 million for some kind of a capstone project for the 50,” said Fitzgerald.

So it was decided that the CCC Foundation would raise money for the ELC as it will act as a celebratory project for CCC’s 50th birthday. This idea was approved by CCC President Joanne Truesdell as well, who, according to Fitzgerald, “didn’t want like a clock tower, or you know a statue of somebody, she really wanted something that made a difference for the whole community.”

For Fitzgerald, what made the project so easy to lobby for were the possibilities it held for both the environment and education.

“This just intrigued me because of the potential [in the ELC]. There have been community group meetings to try and figure out what can be done with this, how it can be used,” Fitzgerald said. “The Foundation board really wanted to know that the college would really commit to using this if they went out and raised the rest of the money, and it’s been a fantastic response.”

Next, the CCC Foundation applied for what is called a Nature and Neighborhoods Grant. The application, dated Jan. 23, 2014 and signed by Truesdell, states the purpose of the project: “Long term objectives [are to] enhance water quality, educational resource, passive recreation for south Portland metro area communities, protecting health and sustainability of Newell Creek Watershed.”

But this process will not be cheap or easy.

The ELC, which was designed after the highly successful Gresham Slough, will help the environment as CCC cleans and helps Newell Creek drain water better, meaning that with the health of Newell Creek will come fewer floods on and around campus. The goal will be to create a better habitat for native plants and animals as well as contribute to the health of the overall watershed. This will include the taking out of many nonnative and invasive species as well as planting new ones. Heading up this campaign will be the horticulture department.

“There are also a lot of not native and what we would call invasive plants in the ELC currently. So, in order for the architects to design where a particular thing might go … in order for them to figure out exactly where those things will be sited, they would like to know what trees are there,” Harber added. “So, the horticulture [students] just got started on inventorying the trees.”

It is with these types of preliminary projects that the ELC is incorporating students in the process. Departments from horticulture and education are figuring out ways to incorporate learning with the beneficial environmental impact the ELC will have.

However ultimately the goal will be to create a healthy space.

“I’m picturing just a much more open, user-friendly site over there that’s more welcoming to the community,” Harber said.

After the ELC’s long and storied past, CCC’s official groundbreaking of the project in May 2016 will be the beginning of the end to finally restoring and giving health back to the Newell Creek Watershed.

“It’s on its way. I just have to find more money,” Fitzgerald said. “Another million dollars.”

The project is projected to be completed in 2017. 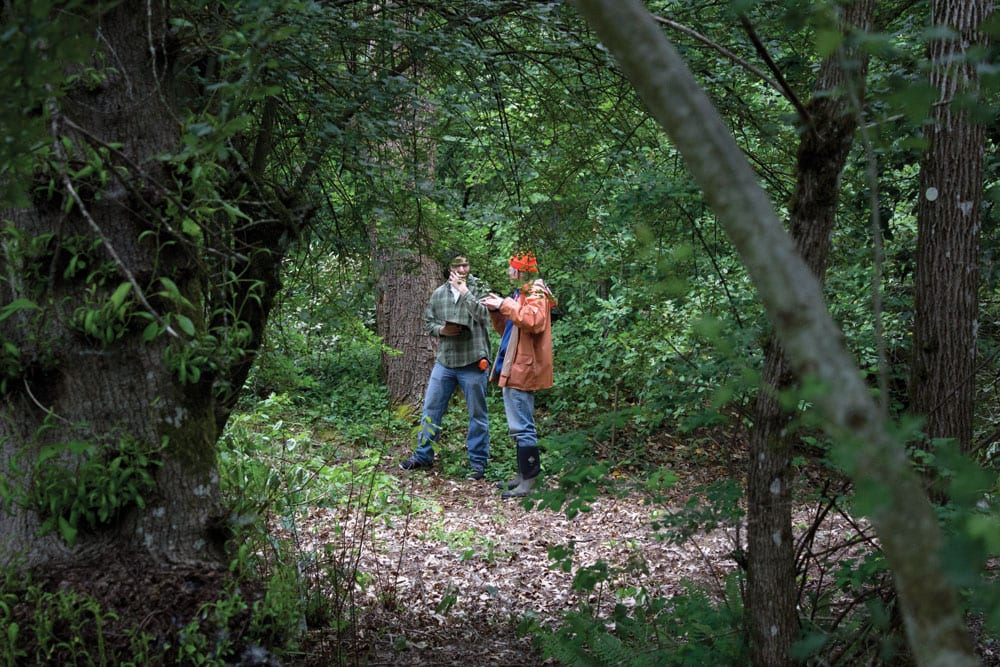 Instructor Bruce Nelson, right, and a student tag trees in the forest next to the Environmental Learning Center.